Have leap days confused the calculated date for the "end of the Mayan calendar"?

At the beginning of the 2012, I predicted that we would see a number of false debunkings of the Mayan Calendar Apocalypse, which would depend on their own misunderstandings of the Mesoamerican Long Count Calendar. I believe my prediction has already come true!

I have now seen several viral claims that the cycling of the Mayan calendar has already happened, and that those who think it will be happening in December have forgotten to take into account leap days.

Since Ceasar introduced leap years in 45BC, there have been 515 leap years including this year(so im told). Without those extra days, the date would be the 2nd of September, 2013.

Since the Mayan Calendar didn't use leap years, and today's date (without leap years) is the 2nd of the 9th 2013, the apocalypse (21st of the 12th 2012) was 9 months ago... So congratulations on surviving 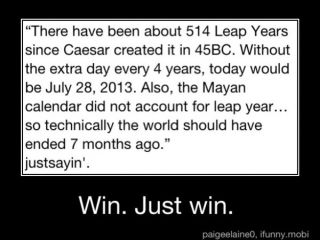 Have the people who have calculated the mapping of the end of the Long Count cycle to occur on December 21st, 2012 failed to take into account leap days?

The Mayan long count calendar is based on days, not solar cycles.. Because of that, leap days are irrelevant.

The long count calendar is based on a series of 5 numbers each representing a number of the previous period — usually 20, except for the tun period:

The 2012 Phenomenon is based on the idea that Mayans believed their current world (the fourth world) ended after 13 b'ak'tuns:

The Popol Vuh describes the gods first creating three failed worlds, followed by a successful fourth world in which humanity was placed. In the Maya Long Count, the previous world ended after 13 b'ak'tuns, or roughly 5,125 years.

For that, we turn to this well-sourced article by John Major Jenkins, a student of Mayan time:

But how are we to relate this to a time frame we can understand? How does this Long Count relate to our Gregorian calendar? This problem of correlating Mayan time with "western" time has occupied Mayan scholars since the beginning. The standard question to answer became: what does 0.0.0.0.0 (the Long Count "beginning" point) equal in the Gregorian calendar? When this question is answered, archeological inscriptions can be put into their proper historical context and the end date of the 13-baktun cycle can be calculated. After years of considering data from varied fields such as astronomy, ethnography, archeology and iconography, J. Eric S. Thompson determined that 0.0.0.0.0 correponded to the Julian date 584283, which equals August 11th, 3114 B.C. in our Gregorian calendar. This means that the end date of 13.0.0.0.0, some 5125 years later, is December 21st, 2012 A.D.1

This same start date was also cited in Wikipedia

Assuming, of course, that the start date is correct, there is no way a lack of leap days in the Mayan calendar could confuse this at all. Leap days must be taken into consideration in the conversion, but historians have known to do that since the leap day was invented.

1,872,000 days since August 11, 3114 B.C. is a calculation that can be made safely with the calendar information we have. The best calculator I could find was this one, in which you can enter the dates and come up with a close (too close for leap days to affect it) but not exact result of 1,872,026.

So, there you have it — yes, the Mayan calendar did not include leap days. But, it didn't need to, since they didn't have anything to do with solar years. In fact, as you can see, the closest equivalent Mayan period to a solar year, a tun, is only 360 days — already five days off.

Not the answer you're looking for? Browse other questions tagged extinction-event .