Is prostitution the oldest profession?

The Oxford Dictionary describes "Prostitution" as

It is often referred to as "the oldest profession", e.g.

My Question:
Is the "oldest profession" claim just a meme or is it based on truth?

Given that prostitution is also observed in animals - including some very closely related to humans - it seems likely that proto-humans were willing to exchange sexual favours for valuables. Whether this counts as prostitution is a matter of definition.

I think it might be possible to say that prostitution is the oldest living profession in the Western World, but a full analysis of that proposition is hard, as it depends on 1) What counts as a profession (early hunters?) and did they pre-date prostitution (who knows?!).

It depends on the meaning you give to the word "prostitution"

There's clear historical evidence that "sacred prostitution" was practiced from the beginning of time.

If you consider those acts true prostitution™, then there's evidence that prostitution is the oldest profession.

If you do not consider those acts true prostitution™, then they still serve as an explanation to where such a saying comes from.

A known example of a temple prostitute is Šamhat. 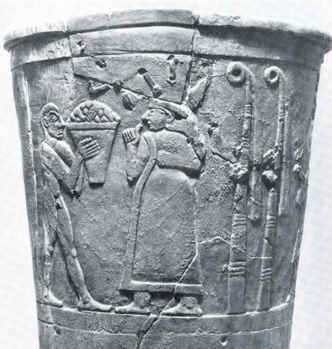 The epic of Gilgameš is

an epic poem from Mesopotamia, is amongst the earliest surviving works of literature.

according to Wikipedia. In particular the

"Old Babylonian" version of the epic dates to the 18th century BC and is titled Shūtur eli sharrī ("Surpassing All Other Kings").

In the slightly later Akkadian version you can find, in Tablet I:

The trapper's father spoke to him saying:
"My son, there lives in Uruk a certain Gilgamesh.
There is no one stronger than he,
he is as strong as the meteorite(?) of Anu.
Go, set off to Uruk,
tell Gilgamesh of this Man of Might.
He will give you the harlot Shamhat, take her with you.
The woman will overcome the fellow (?) as if she were strong.
When the animals are drinking at the watering place
have her take off her robe and expose her sex.
When he sees her he will draw near to her,
and his animals, who grew up in his wilderness, will be alien to him."

So it seems that it's certainly an ancient profession.

More in general, it is clear that in multiple cultures there was a huge overlap among the concepts of fertility cults and rites and prostitution. The above is just an example of a temple prostitute:

Sacred prostitution, temple prostitution, or religious prostitution is a practice of worship that includes hieros gamos or sacred marriage performed as a fertility rite and part of sacred sexual ritual.

According to the same source it was practiced in:

Still, according to the well-referenced article on Wikipedia, there is some controversy on whether this was true prostitution™ or simple devotional sex. In any case, the traditional view is to call these acts prostitution.

Whether they were prostitutes or not, is a meaningless game of semantics and definitions. It is up to the reader to decide!

Rather than get caught up in different definitions of the word 'prostitution', let's look at the definition for profession:

Since academia didn't exist at the onset of human culture, we can reduce the definition to "a calling requiring specialized knowledge".

Even allowing for prostitution requiring specialized knowledge it would seem that hunting or perhaps farming is the worlds oldest profession.

The earliest evidence for prostitution we have under any definition is 18th Century BC, according to Wikipedia (expanded on in Sklivvz's answer). By contrast, humans were hunting using specialized knowledge starting from some 80,000 to 70,000 years ago. To quote from Wikipedia:

Starting at the transition between the Middle to Upper Paleolithic period, some 80,000 to 70,000 years ago, some hunter-gatherers bands began to specialize, concentrating on hunting a smaller selection of (often larger than had previously been hunted) game and gathering a smaller selection of food. This specialization of work also involved creating specialized tools like fishing nets and hooks and bone harpoons.

Hunting meets the definition of a profession as it is being used in this context and pre-dates prostitution as a profession by some 50,000 years, at least.

Hunting may not be the oldest profession, but it is far older than prostitution.

Not the answer you're looking for? Browse other questions tagged history sexuality sociology anthropology .

9
Which are the oldest pyramids?
8
When is the origin of Datura in India?
14
Does swearing give people the impression that you are from a lower social class?
2
Is the Dome of Rock the oldest Islamic building in existence?
12
Do “Soupeurs” exist?