Does global warming make for milder winters? What about specifically North America?

(You often hear people extol global warming for giving us mild winters. Is there evidence of a causal link?)

Two examples claims of global warming causing mild winters in New York, and Tibet are linked in the comments. However, my question is whether this is a global phenomenon.

This is a tricky question to answer because weather, what you experience at your house right now, is not really that same thing as climate, the patterns of global air and sea movements that bring weather.

Since the mid 1970s, global temperatures have been warming at around 0.2 degrees Celsius per decade. However, weather imposes its own dramatic ups and downs over the long term trend. We expect to see record cold temperatures even during global warming. Nevertheless over the last decade, daily record high temperatures occurred twice as often as record lows. This tendency towards hotter days is expected to increase as global warming continues into the 21st Century.

Vladimir Petoukhov, a climate scientist at the Potsdam Institute for Climate Impact Research, has recently completed a study on the effect of climate change on winter. According to Petoukhov,

These anomalies could triple the probability of cold winter extremes in Europe and northern Asia. Recent severe winters like last year's or the one of 2005-06 do not conflict with the global warming picture, but rather supplement it.

Weather being a local response to climatic conditions means that you have to understand what has changed in the climatic patterns in your region. What are your local weather drivers? How have they changed since the 1970s?

Thus, you could end up with some areas experiencing colder winters; due to greater moisture levels in the air, more precipitation of snow, greater heat loss at night due to clear skies, etc. Or you could have an area that will experience milder temps in winter due to warmer air currents, warmer oceans, localised heat island impacts, etc.

For further information you should investigate the weather and climate agencies publications for your area.

Global warming, by definition, means higher temperatures on average. Since warmer winters are described as "milder" the answer is yes, on average winters are milder in a warmer world. That does not preclude cold winters in many years or in many places. But the changes year to year are volatile compared with the overall rise in temperatures, even when averaged over half the globe.

See these charts from Wood for Trees for northern hemisphere temperature anomalies, taken from the Hadley Centre/Climatic Research Unit data series. The red line is for (I think) January anomalies and the green line for July anomalies. The trend from the 1970s to the 1990s is fairly clear. 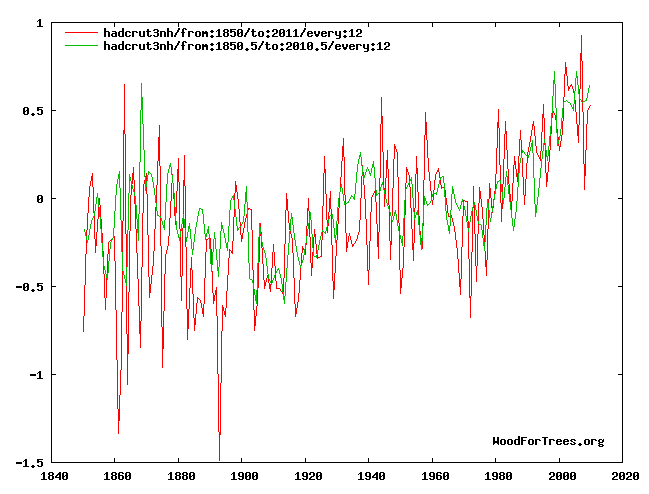