Are 50% to 90% of prostitutes in the Netherlands sex slaves?

In Does Legalizing Prostitution Work?, the author says that even after prostitution is legal, a lot of women are still forced into prostitution.

These women are Amsterdam's leading tourist attraction (followed by the coffee shops that sell marijuana). But an estimated 50 to 90 percent of them are actually sex slaves, raped on a daily basis with police idly standing by.

Maybe all this time I was wrong. Maybe most prostitution are indeed forced. I thought otherwise.

Well, can anyone verify?

So far, I have been unable to find any estimates that reach the 50-90% figure quoted.

The Eighth report of the Dutch National Rapporteur on Trafficking in Human Beings (2010) explains the difficulty:

There are conflicting estimates of the scale of human trafficking from different organisations and countries. It is therefore very difficult to be certain about the scale of the problem, which underlines the need for the systematic and coordinated collection and management of data.

However, they do have a detailed analysis of the reported cases of Human Trafficking in the Netherlands, and the numbers are disturbing, with over 900 victims reported in 2009.

Of these, at least 45% were being exploited in the sex industry (likely a lot higher, given the significant "unknown" figure):

Obviously, the unreported crime figures are likely to be much higher. These numbers should be compared with the number of prostitutes in the Netherlands - Wikipedia cites a number of different studies that range from 15,000 to 30,000.

As for consent, the 2004 version of the report includes figures on how the traffickers gained compliance: 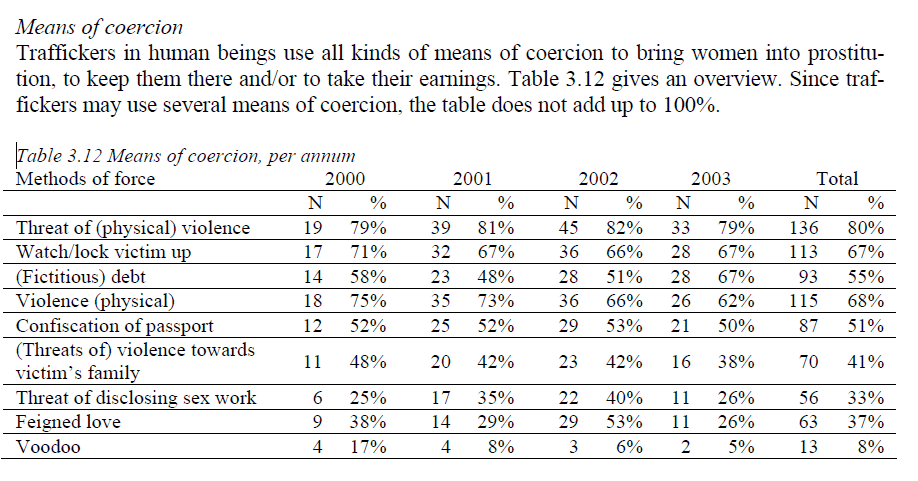 45
Does legalizing prostitution lead to an increase in human trafficking?
11
Is sex slavery active in the Saudi Arabia, Qatar, and the United Arab Emirates?