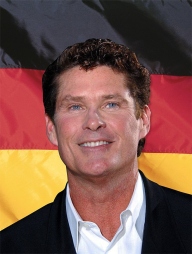 From a BBC article:

David Hasselhoff, star of the hit 80s TV series Knight Rider, is renowned in celebrity-obsessed circles for being Big In Germany; not only as an actor, but as a purveyor of soft rock anthems.

It's a common trope that Germans love David Hasselhof , e.g. in the movie Dodgeball he plays the coach of the German Dodgeball team.

My question:
Does (or did) David Hasselhoff have more fans in Germany than in other countries?

There does not seem to be any evidence that the Hoff is more popular in Germany than other countries. While living in Berlin for a few years I certainly never saw any exposure to him than what might be considered average.

The idea may have come from the fact that he was popular at the tail-end of the 80's more so than other countries and had hit , Looking for Freedom, that was at number 1 for about six months.

It could also be that he performed this song during celebrations for the wall coming down, when his popularity had already peaked in most western countries.

Not to mention Germans being enthusiastic fans of Hasselhoff is a good example of a self-propagating meme, which was no doubt helped along by Norm McDonald incorporating the trope into his skits on SNL.

This chart on the German Wikipedia shows the chart positions for Hasselhoff's different albulms. Chart positions in Germany generally trail behind Austria and seem to average out to be similar to Switzerland. Chart positions are not the only indicator of an artists popularity ion a country, but they help in giving an indication.

It doesn't look like any study has been done on this topic. Given the evidence we do have, there is nothing to indicate The Hoff is more popular in Germany than other countries.

Not the answer you're looking for? Browse other questions tagged history music television .

23
Did the biblical King David exist?
17
Was David Cameron linked to "Hang Nelson Mandela" posters in the 1980s?
4
Did the Germans invent Radar first?
4
Did Nintendo own Love Hotels?
5
Did David Ricardo make £1M from the Battle of Waterloo?