In this 2008 article, "brain piercing" is described, with a photo:

They drill small holes in your scull, then pass a metal (gold or silver) ring through them. The trick is that the ring presses the brain tissue and invokes euphoria. The whole procedure is carried under an anesthesia and after the ring is passed, it does not cause any pain.

The claims about euphoria are certainly nonsense.

First off, for a neuron to do anything, it needs to be stimulated appropriately. None of the neurons that are sensitive to touch and pressure are in the brain:

Light touch is detected by receptors in the skin. These are often found close to a hair follicle...

This means that pressing on the brain will not produce a reaction that is typically associated with activity in the pressed area.

Second, the brain areas under the "brain piercings" are nowhere near a center that could lead to pleasure. Emotional regulation is located in the limbic system (the labeled bits of the picture below, mostly blue and purple): 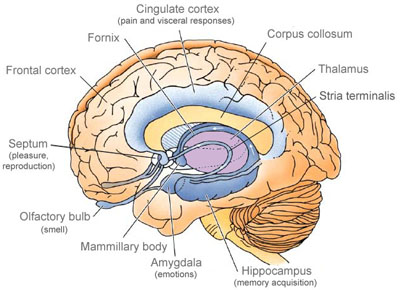 The closest thing to euphoria (a putative 'reward' center) has been attributed to the septum (labeled in the picture above as '(pleasure, reproduction)'. Also, note that stimulation in this study about the septum as a reward center, was done by way of applying electric current to the brain:

It is clear that electrical stimulation in certain parts of the brain, particularly the septal area, produces acquisition and extinction curves which compare favorably with those produced by a conventional primary reward. With other electrode placements, the stimulation appears to be neutral or punishing.

The punctured locations are not deep enough and they are not even located above the septum.

The text you linked says:

The foramens will be done on your nucha - there is an especially sensitive range of a brain.

Being an aspiring neuroscientist, I found it disturbing that I'd never heard of this especially sensitive 'range' of the brain. But it turns out the nucha is actually the neck!

The back or upper part of the neck; the nape . The nape of the neck . n . [ML . nucha , neck] The upper surface of the neck connecting the head and thorax;

Finally, anecdotal data from the neuroscience institute where I spend my days, says that the closer the species to ours, the more easily the brain inflames when the skull is left open. Monkeys are very sensitive, rats can heal well. I would guess that a human would quickly get terribly sick from a brain piercing.

Not the answer you're looking for? Browse other questions tagged neurology body-piercing .

53
Do the Left Brain and Right Brain have different functions?
111
Do we only use 10% of our brain?
8
Does brain consist of 20% Omega-3 fatty acid?
7
Are sea salt soaks beneficial for healing a body piercing?
8
Death of brain cells
10
Can your thoughts be read through monitoring brain waves?
2
Is sleep "defragmentation" for your brain?