I have seen several times people posting on Facebook about the history of wearing very low trousers. They claim that it was invented in U.S prisons. Apparently by showing a little bit of their butts inmates were letting know other inmates that they were sexually available.

This seems to me like a hoax made to convince people to dress 'properly'. Is there any truth behind this? 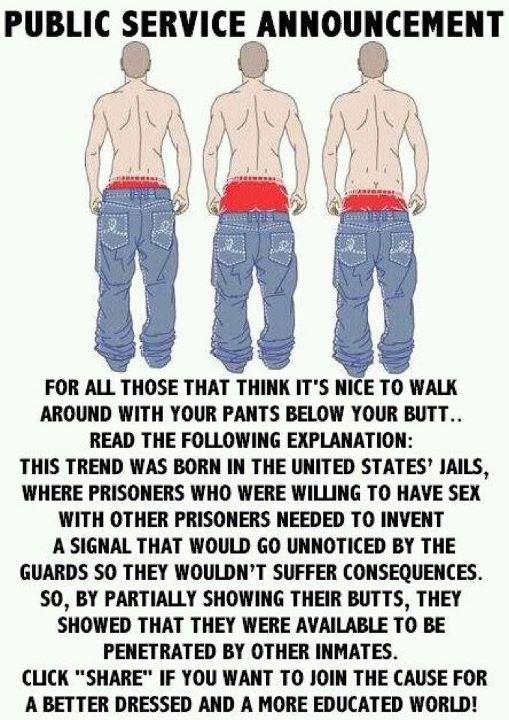 From Mark Anthony Neal, professor of African and African-American Studies at Duke University (2007):

Also, saggin' is nothing new. Long-time observers of urban youth culture can recall seeing examples of saggin' at least 20 years ago.

In those days, saggin' was linked to prison culture and the fact that prisoners were not allowed to wear belts.

For many of those first generation of saggers, the style was an emblem of their hardcore status.

but he also mentions:

Within gay subcultures, saggin' can be read as a sign of availability.

The practice of wearing low-slung, baggy or sagging trousers is thought to have begun in US prisons.

Inmates were issued with ill-fitting clothes and denied belts due to fears over use as weapons or suicide aids.

Sagging began in prison, where oversized uniforms were issued without belts to prevent suicide and their use as weapons.

It seems that the origin of "Sagging " is not known for sure, but the prevailing opinion seems to be that it began in prison, due to inmates not being allowed to wear belts.

Not the answer you're looking for? Browse other questions tagged sexuality clothing .