Einstein's brain has been the subject of much debate and speculation, because of his notable and exceptional contributions to our understanding of the universe.

The claim exists that his brain may have been unusual in some way, which could correlate with his genius. For example, quoting from Wikipedia:

The brain has attracted attention because of Einstein's reputation for being one of the foremost geniuses of the 20th century, and apparent regularities or irregularities in the brain have been used to support various ideas about correlations in neuroanatomy with general or mathematical intelligence.

I am curious as to whether this is due to a physiological phenomenon, or if it must be explained by something else.

Was the brain of Albert Einstein physiologically different than that of most other humans?

There are 3 published scientific studies that have examined Einstein's brain. 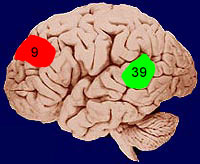 ... The ratios of neurons to glial cells in Einstein's brain were compared to those from the brains of 11 men who died at the average age of 64.

... there were more glial cells for every neuron in Einstein's brain.

It is important to remember that the areas 9 and 39 make important connections with many other areas of the brain. To assign a particular behavior or personality to a single brain area is too simple. Parts of the brain do not act by themselves. Rather, complex behavior is the result of many areas acting together.

2) Alterations in cortical thickness and neuronal density in the frontal cortex of Albert Einstein. (1996)

Einstein's brain weighed only 1,230 grams, which is less than the average adult male brain (about 1,400 grams).

The authors also reported that the thickness of Einstein's cerebral cortex (area 9) was thinner than that of five control brains. However, the DENSITY of neurons in Einstein's brain was greater.

In other words, Einstein was able to pack more neurons in a given area of cortex.

3) The exceptional brain of Albert Einstein (1999)

In this paper, the external surface characteristics of Einstein's brain were compared to those from the brains of 35 men (average age, 57 years old).

His brain was also 15% wider than the other brains.

The researchers think that these unique brain characteristics may have allowed better connections between neurons important for math and spatial reasoning.

Although these results are interesting, it must be remembered that this study had only ONE brain in the experimental group...Albert Einstein's brain.

It remains to be seen if other mathematical geniuses also show these distinguishing brain characteristics. Moreover, the study did not investigate the brain at a microscopic level. In other words, the study says nothing about how neurons in these brains were connected and of course, could not tell if there were differences in the way the neurons functioned.

Not the answer you're looking for? Browse other questions tagged physiology intelligence albert-einstein .

158
Was Einstein a poor student?
44
Are different prices in wines justified by taste?
16
Does brain mass have any correlation to intelligence?
32
Does the brain use more energy during mental work?
37
Does the tongue have different taste zones?
11
Will holding in your sneeze kill brain cells?
12
Was Einstein's riddle (the zebra puzzle) created by Albert Einstein?
5
Did Einstein's brain weigh less than the average?