Have there been any credible reports of unidentified flying objects?

My criteria for a credible UFO report would include:

Of course, as reasoned skeptics, you are free to apply any criteria you deem relevant.

No UFO has ever been revealed to be an alien spacecraft. That said, we can't explain all UFOs through natural phenomena. In some cases the sightings remain mysterious.

From 1947 to 1969 a project called "Blue Book" was run by the USAF to investigate UFO sightings. The results are the following:

From 1947 to 1969, the Air Force investigated Unidentified Flying Objects under Project Blue Book. The project, headquartered at Wright-Patterson Air Force Base, Ohio, was terminated Dec. 17, 1969. Of a total of 12,618 sightings reported to Project Blue Book, 701 remained "unidentified."
-- source

As such, I would say that, yes, unidentified flying phenomena that cannot readily be explained away are quite common, 1 every 11 days on average (in the United States alone).

You can now browse the Project Blue Book files online as they have been disclosed.

They are not flying and they are not objects.
But people saw them :)
(you can find a colection of reports of events in my site)

Because I've been always skeptic I studied this subject several years ago (during months),
and I concluded that two classes of UFO events can be physically explained. (edit add: I decided to offline the content because no one care to know what I found)
IMO they are just Aerial Phenomenons. If you are so skeptic as I am you will have to study what I've explained there.
I'm expecting some comments if you deny my view point and downvote.
(the physical papers that I've consulted in relation to ice crystals and contrails... will be included in the site in the future)

quote from "Pilot Survey Results” at NARCAP.ORG (the site is offline in the moment of writing)

This paper presents the results of a confidential aircrew survey presented to 298 currently rated and flying commercial pilots employed by a U. S. airline. Table 5

If there are about 600,000 commercial pilots currently flying in the U.S.A. and 23 percent of them saw something they couldn’t identify this amounts to 138,000 witnesses.

colections of reports on UFOs:
COMETA report (French association) detail the results of a study by the Institute of Higher Studies for National Defense
COMETA_part1.pdf 23 pages
COMETA_part2.pdf 47 pages

The Scientists have been divorced of the UFO problem:
Society for Scientific Exploration: Report on a Survey of the Membership of the American Astronomical Society Concerning the UFO Problem: (1994) : Part 1 and Part 2

Not reported, but it is true:
No one noticed that the path of flight was in the directon of the Full Moon, South India, and the contrail was above Switzerland (cold atmosphere, no wind for sure at the time of the event). The contrail stood straight for long enough time and transported the light of Full Moon, below the horizon, to the cockpit.
Just check the images bellow, obtained with help of HPlanet - Home Planet software and Google Maps)

Physical explanation:
A contrail is made of ice crystals that in non turbulent atmosphere descend slowly exposing the bigger faces (frequently hexagonal) parallel to the ground (they go down like a large leave falling from a tree). The normal to that face oscilates around 8º max and they offer a continuous mirror for light that jump from crystal to crystal without leaving the contrail when light is injected along the longitudinal axis of the contrail. The total reflection in the faces are due to the low angle of incidence providing a 'natural low loss optical fiber'. And that was the case of this report. The pilots usually can not see the contrails made by their own jets. This case is an exception. The contrail was there in the right direction and the moon light (full moon) made the impossible: for brief moments the pilots saw the moon. Most of the UFO lights seen by night are made by some invisible contrail in the right direction to sunlight or, the less frequent moonlight, when the sun or moon are already below the horizon.

Position of full moon over South India at the time of the event. 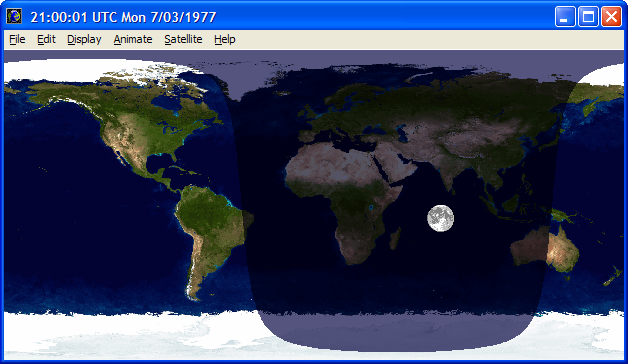 Local path of the flight over France and Switzerland 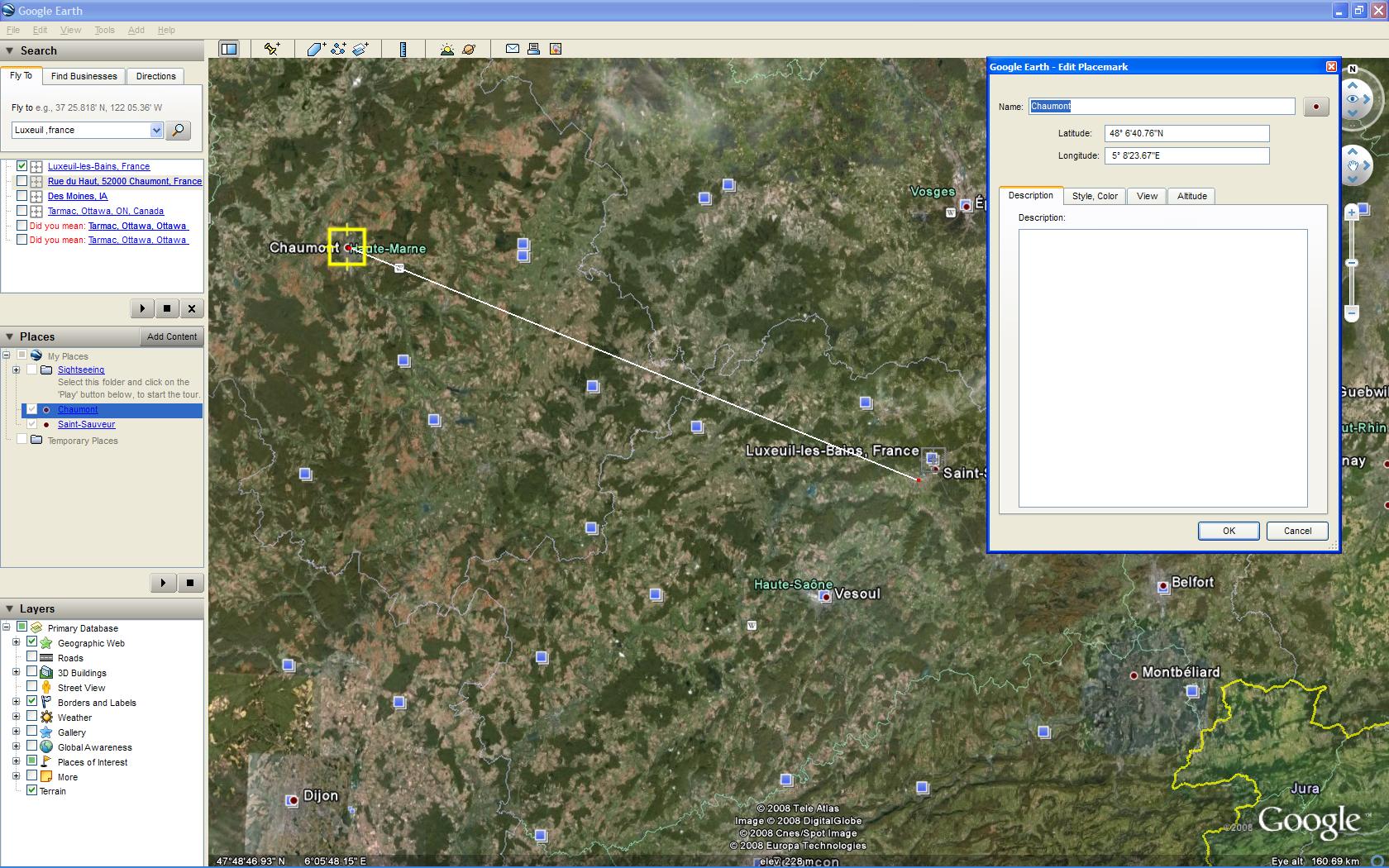 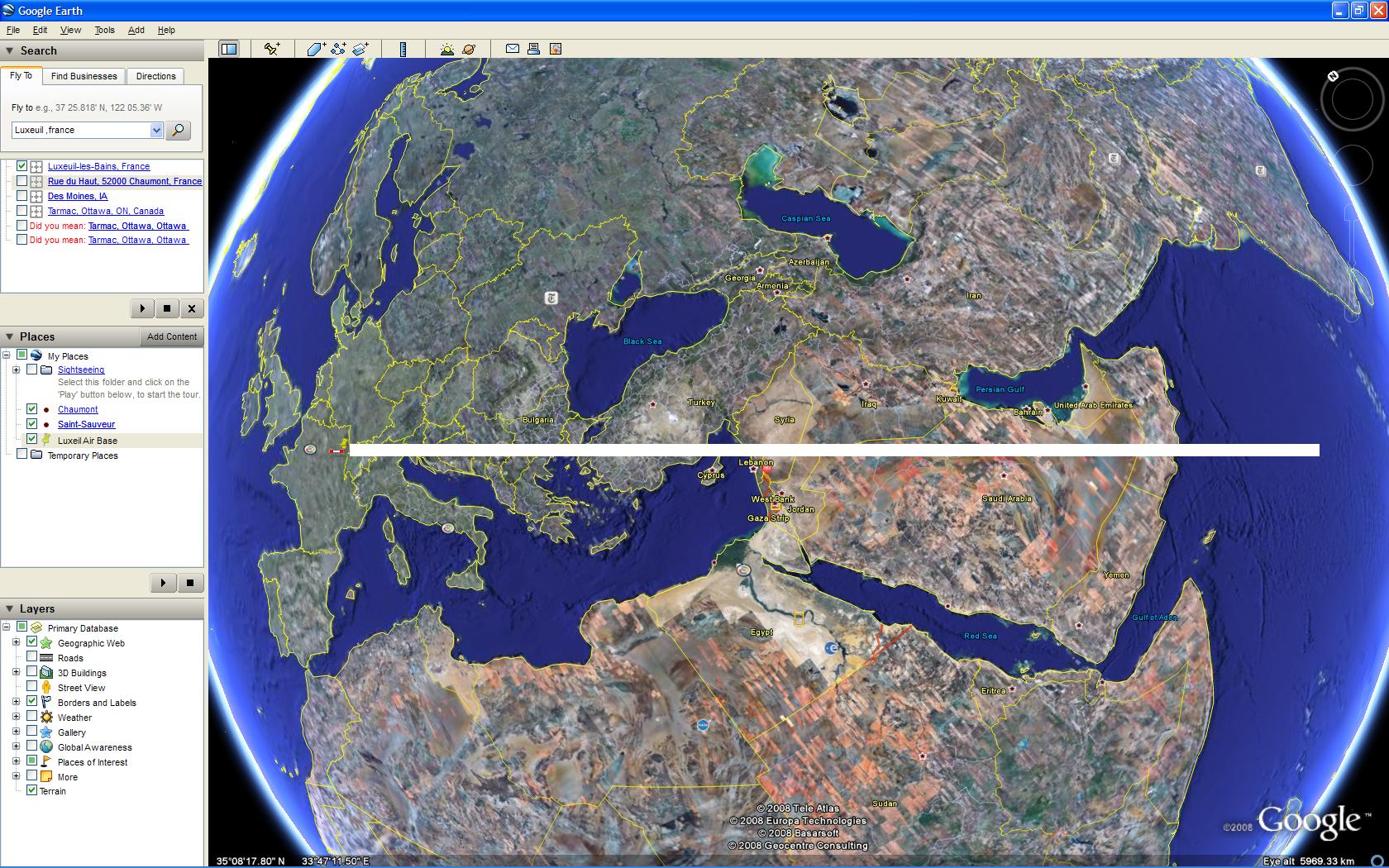 Check the report of the pilot:

They noticed a brilliant light coming towards their Mirage from their exact right and on a collision course with them, and first thought it may be a jet fighter, but when they radioed to the ground control at Contrex?ville for reporting it and getting it identified, they learned that the ground radar showed nothing and that no other aircraft was known to be in that area. The ground controller asked them to check their oxygen, which indicates that he thought the pilots may be hallucinating.

The light appeared bigger and bigger as it approached their aircraft from their rear right. The pilot was flying at Mach 0.98 and made a turn to the right and then to the left to make sure the light was not a reflection of some sort on the cockpit. As he did these maneuvers, both of the crew could distinguish that the light was the front of a dark solid object. Despite the evasive maneuver, the unidentified object managed to stay exactly behind them for a few seconds, a very dangerous situation if the unknown object were to be hostile. The then object made a turn to the North-West at an estimated speed of Mach II, and went away to the left of the Mirage IV.

and reappeared 45 secs later to tease again the pilots.

In my oppinion this report of the pilots is credible. Also credible is the existence of the contrails, even if we can not see them by night time. Incredible, IMO, is the lack of imagination of the scientific community and others, that in the absence of a theory try to put down the testimonys, or waiting for help from some alien people.

By day time the testimonys are mostly correct but the physical explanation is based in the well known (in this moment I dont have the name in my head)... effect, and ....

They report 'objects' but they saw 'light'.
Find a suitable source of Light and a path thru the medium (atmosphere).

Christopher Melon, a former U.S. Department of Defence employee, now on the board of UFODATA, and recipient of the National Reconnaissance Office Gold Medal and the Defense Intelligence Agency Director’s Medal, whose background includes:

At DoD, Chris served on a small committee that provided oversight of all DoD special access programs, in order to eliminate potential waste and duplication. The oversight included visits to Area 51 and other sensitive facilities. He also spent over a decade on the Senate Intelligence Committee, involved in oversight of NRO, CIA, NSA and other intelligence organizations. He became the first Congressional official to review all of the NSA’s compartmented programs.

Chris responded to a question a recent article as follows:

Q. Which credible UFO incidents have you found particularly impressive and convincing?

A. A few stand out in my mind. In November 1989, thirteen police officers and hundreds of other witnesses saw two silent triangular craft gliding over Belgium. This was the beginning of a wave of sightings there lasting well over a year. Ground and air radar data were acquired as well. The Belgian Air Force investigated the events in cooperation with a team of scientists and consulted with the US and NATO countries, but could not find a conventional explanation.

On the night of March 30, 1993, over a hundred witnesses in England, including police officers and military personnel, saw a triangular-shaped craft able to rapidly accelerate in seconds from a hovering position. The British Ministry of Defense stated that “none of the usual explanations put forward to explain UFO sightings seem applicable” and concluded that the evidence showed that “an unidentified object (or objects) of unknown origin was operating over the UK.”

Similarly, multiple police officers in Southern Illinois saw an object in January 2000 that looked and behaved very similarly to the Belgian and British UFOs. In fact, the Illinois police officers’ drawings of the craft are uncannily similar to the depictions of triangular craft produced by Belgian law enforcement officers a decade earlier, as well as many others since.

In 2006, pilots and airport personnel witnessed a disc-shaped object hovering over O’Hare airport for over five minutes, yet no government investigation was undertaken.

And, while most sightings have conventional explanations, I think it is stunning how many reports come in regularly to groups like MUFON, with impressive detail, including photos or videos. I often hear from skeptics, “If UFOs are out there how come nobody ever gets a video with all the smartphones around?” That is ignorant, it happens all the time!

In all though, I thought it was an interesting enough article to quote in response to this question, an article worth reading in its entirety.

Not the answer you're looking for? Browse other questions tagged astronomy aviation ufo .

1
Have extra-terrestrials ever been in contact with humans?
4
Is the recent media attention given to the USS Nimitz UFO incident a disinformation scheme?

16
Is there “vastly more matter than anti-matter” in the Universe?
8
Are there pine trees on Mars?
4
Could meteors have been been formed with lead, and mislead radiometric dating?
22
Have airlines as a whole been unprofitable over their history?
6
Is there any evidence of Planet X / Nibiru?
38
Are there too few Supernova Remnants to support the Milky Way being billions of years old?
6
Is this a credible video footage of an unidentified flying object or unidentified aerial phenomena?
2
Is there any evidence that laptops in airplanes might be used for terrorist attack?