Are BMW Owners the worst drivers?

BMW drivers are widely thought to be poor drivers. For example, in a poll for Auto Trader:

Around 21,000 motorists were quizzed, and 45 per cent said BMW drivers were the worst on the road.

Is this perception accurate? Are BMW owners more likely than owners of other cars to be involved in accidents or more likely to have convictions for driving offenses?

BMW drivers are not the worst on the road:

I found a comparison of accident rates for drivers of different cars.

The website looked at over almost a million car insurance quotes in order to produce the analysis. The data looks at different car manufacturers and car colours and correlates these with claimed driver accident rates in the five year period before the quote was run. 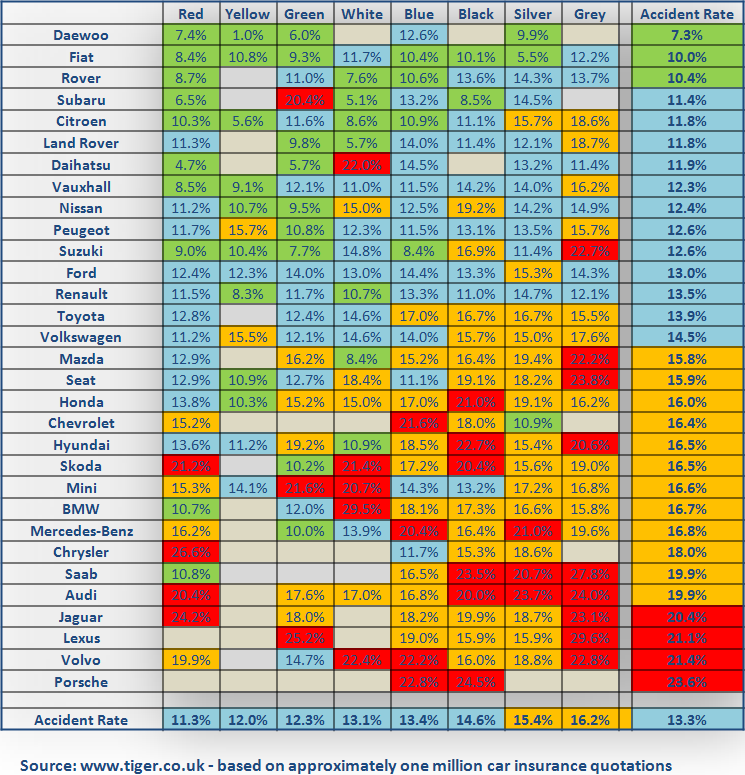 I find these types of issues interesting, although it can be hard to answer the question as many different answers are possible depending on how you look at it.

For example, how is driving ability to be measured? Speeding tickets? Accident rate? Surveys of the general driving population?

Perhaps car accidents are a decent indicator given that it is widely accepted that human error is the cause of most accidents. This study states:

A 1985 report based on British and American crash data found driver error, intoxication and other human factors contribute wholly or partly to about 93% of crashes

I have had a lot of trouble finding reliable statistics on car accidents per manufacturer.

I did find this article (which doesn't show the source of its data) which states that for data collected over 12 months from 2011 to 2011, the top 3 most accident prone cars according to this data were the Honda FR-V, the Volvo XC90 and in third place the Lexus RX.

It is important to note that this in no way indicates that BMW are not the worst drivers (using accidents as a metric) due to the limited amount of data I was able to find. However I could find nothing to support the claim that BMW drivers are the worst, or even any worse than drivers of cars from other manufacturers.

Recently a Dutch tv channel reported on speeding on Dutch roads.The conclusions were based on the number of camera tickets issued between October 2010 and October 2011. They linked speeding to car make. Interestingly, the most speeding drivers are in the age frame 50-59. So if you consider speeding bad driving, there is some "data" (see side node below).

According to their report the drivers of grey mercedes' are the worst followed by Audi and then the BMW.

Some side notes remain. First the journalists who conducted this study only mention absolute numbers without correcting for the distribution of the car models on the Dutch highways. They also only report on their findings without releasing the actual data.

A recent study suggests that it might not be the model, but the wealth of the driver making him a bad driver. Being an upclass model, could explain why BMW-drivers might drive more inconsiderate then others.

Not the answer you're looking for? Browse other questions tagged road-vehicles safety .

20
Do elderly drivers cause the most accidents?
24
Are big cars and SUVs safer than small cars or do they just *feel* safer?
34
Does the 'two-second rule' provide a valid minimum gap for safe driving?
20
Does marijuana impair driving?
8
How effective are reflectors at preventing pedestrian deaths?
8
Is the self-driving car technology of 2017 less lethal than human drivers?
12
Are American standards on automotive turn signals demonstrably less safe than European ones?