Does a lobster feel little/no pain when boiled alive? 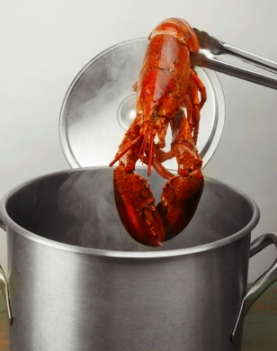 I have just read Cracked.com's "9 Ridiculous Cooking Myths You Probably Believe", that claims:

[...] because [the lobster's] nervous system isn't very complex, so it's feeling little to no pain.

It references an ABC News article:

But animals with simple nervous systems, like lobsters, snails and worms, do not have the ability to process emotional information and therefore do not experience suffering, say most researchers.

... The nervous system of a lobster is very simple – not unlike that of an insect. Neither insects nor lobsters have brains.

For an organism to perceive pain it must have a more complex nervous system. Neurophysiologists tell us that lobsters, like insects, do not process pain.

Contrary to claims made by seafood sellers, scientists have determined that lobsters, like all animals, can feel pain.

"As an invertebrate zoologist who has studied crustaceans for a number of years, I can tell you the lobster has a rather sophisticated nervous system that, among other things, allows it to sense actions that will cause it harm. … [Lobsters] can, I am sure, sense pain."
—Jaren G. Horsley, Ph.D

Is the neurosphysiology of a lobster complex enough to allow it to feel pain?

I'm consciously not giving a specific *definition* of pain here, because neither of the above do. But I'm aware that the answer may differ depending on how pain is defined.

In short, we can assume that they do.

There are two layers to this problem:

The second question is really hard to answer, and I would say, fundamentally philosophical. When does rubbing become scratching?

So please bear in mind that I would find very surprising that a good answer can be given to the second question.

The first question is quite easy to answer and the latest studies confirm (convincingly) that crustaceans do feel stimuli corresponding to noxious actions and that they take action to avoid the stimuli.

The first study I will mention is "Nociception or pain in a decapod crustacean?".

In this experiment prawns were subjected to negative stimuli (sodium hydroxide on their antennae) to see if they affected short- and long- term behaviour. They did. The scientists also used benzocaine (a painkiller) to test if it pain-killers were effective. They were.

These results indicate an awareness of the location of the noxious stimuli, and the prolonged complex responses indicate a central involvement in their organization. The inhibition by a local anaesthetic is similar to observations on vertebrates and is consistent with the idea that these crustaceans can experience pain.

The second study that I present is "Pain experience in hermit crabs?" 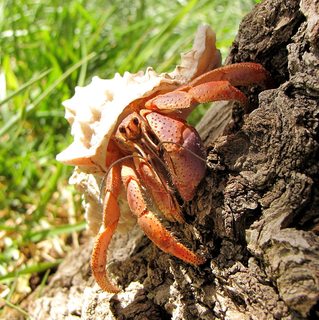 In this experiment, electric shocks were given to hermit crabs inside their shells and observe that:

Only crabs given shocks evacuated their shells indicating the aversive nature of the stimulus, but fewer crabs evacuated from a preferred species of shell indicating a motivational trade-off. Some crabs that evacuated attacked the shell in the manner seen in a shell fight. Most crabs, however, did not evacuate at the stimulus level we used, but when these were subsequently offered a new shell, shocked crabs were more likely to approach and enter the new shell. Furthermore, they approached that shell more quickly, investigated it for a shorter time and used fewer cheliped probes within the aperture prior to moving in.

Thus the experience of the shock altered future behaviour in a manner consistent with a marked shift in motivation to get a new shell to replace the one occupied. The results are consistent with the idea of pain in these animals.

Not the answer you're looking for? Browse other questions tagged biology physiology zoology cooking .

20
Do you feel pain in a life-threatening situation?
41
Can a frog be slowly boiled alive without it noticing?
23
Does your heart stop beating when you sneeze?
15
Does plucking the feathers from live and conscious birds cause them pain?
9
Do red-headed people feel pain differently?
12
Do fish feel pain?
1
Did the Garuda Purana explain the formation of embryo and consciousness before modern science?