Does our brain make ourselves look five times more beautiful than we really are?

This "random fact" has been going on for a few days and no one seems to know it's source or if it's supported by any reliable research. If the research does exist I'd be much interested in checking what's the criteria to measure beauty. 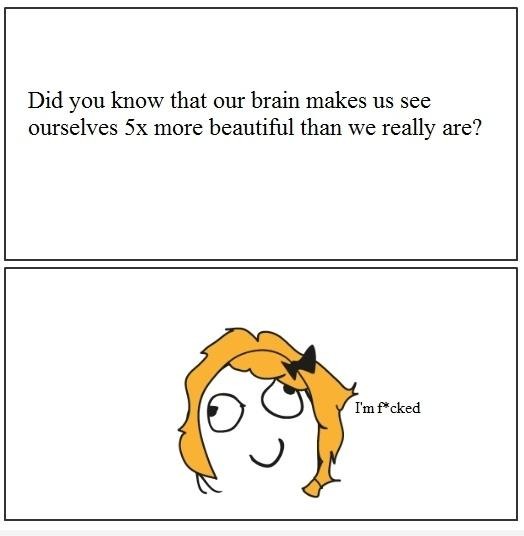 "Did you know that our brain makes us see ourselves 5x more beautiful than we really are?"

As has been pointed out in the comment above, the specific claim that we see ourselves as exactly five times more attractive is a little absurd. There are no units measuring beauty, that I am aware of.

Leaving at that, however, is leaving much unanswered. There is, I think, a vaguer but still quite interesting claim to investigate: Do we overestimate our own attractiveness?

That question has an answer, and the answer is yes.

According to the authors of The Invisible Gorilla: And Other Ways Our Intuitions Deceive Us, relating the findings of Narcissistic Illusions in Self-Evaluations of Intelligence and Attractiveness,

The study itself is unfortunately locked behind a paywall, but the abstract does support this:

Both males and females overestimated their own intelligence, with males, but not females, also overestimating their attractiveness. ... Males showed greater positive illusions than females, with this effect at least partly attributable to observed gender differences in narcissism

The theory that we overestimate our own beauty is supported by another study: Mirror, Mirror on the Wall: Enhancement in Self-Recognition.

Researchers took photos of undergraduate students and then invited those students back to the laboratory two to four weeks later to identify their face out of an assortment of eleven images. Out of those eleven pictures, five were altered to make the subject less attractive than the original and five were altered to make the subject more attractive. The eleventh one was the original, unaltered picture

The result? The majority of participants picked one of the pictures that was altered to be more attractive than the original picture, overestimating the attractiveness by six to twelve percent.

The researchers then did a similar experiment, but this time they asked the participants to evaluate friends and strangers, in order to see if we also overestimate other people's attractiveness or only our own. In the end, subjects overestimated their friend's attractiveness but not the stranger's.

TL;DR: We do overestimate our own beauty, but not by anything close to a magnitude of five times.

Not the answer you're looking for? Browse other questions tagged psychology neurology .

21
Beer goggles: Can alcohol make people look more attractive?
32
Does the brain use more energy during mental work?
4
Are consumer brain-wave devices faster than keyboard/mouse?
13
Are men 6 times more likely to be struck by lightning than women?
44
How long is it possible to maintain concentration?
8
Are our minds quantum entangled with people we are (emotionally) close to?
8
Does browsing Facebook make people more sad than browsing the Internet?
3
Does salt (or sodium) not make you thirsty?