Was the “hole in the ozone” caused by CFCs?

Burt Rutan (the aviator) has put out a critique of climate change:

On page 7, this caught my eye:

I seem to have missed that memo. Wikipedia still mentions CFCs as a cause.

The details of polar ozone hole formation differ from that of mid-latitude thinning, but the most important process in both is catalytic destruction of ozone by atomic halogens. The main source of these halogen atoms in the stratosphere is photodissociation of man-made halocarbon refrigerants (CFCs, freons, halons). These compounds are transported into the stratosphere after being emitted at the surface. Both types of ozone depletion were observed to increase as emissions of halo-carbons increased.

Is there any credible backing for Mr. Rutan's offhand claim?

While the consensus is that CFCs cause the ozone hole, there is recent evidence that we don't understand it as well as we thought

When I first read the Rutan comments I though he had simply gone nuts in his general skeptical approach to scares (on Skeptics.se we should applaud his skeptical approach unless his evidence is nonsense), but then I uncovered some recent science that might give some grounds for his claim (though not the degree of certainty he expresses).

As far as I can tell the original source is from a Nature news story in 2007 which points out that some recent reevaluations of the reaction kinetics of some of the key reactions involved in ozone depletion had given radically different results to those used in the original models of ozone depletion. As one of the scientists reviewing the results said:

If the measurements are correct we can basically no longer say we understand how ozone holes come into being.

This view had widespread coverage in the press and blogs. But perhaps the most significant comment on a related topic was by James Lovelock and reported on this blog. Lovelock (intimately involved in the science as he invented the key method for detecting small amounts of things like CFCs) is commenting on the recently revealed Climategate emails and their implication of disreputable behaviour by some climate scientists:

We should have been warned by the CFC/ozone affair because the corruption of science in that was so bad that something like 80% of the measurements being made during that time were either faked, or incompetently done.

His comments are interesting as they suggest we reached consensus on the ozone hole a little quickly and, once the bandwagon was established a lot of poor science was done (which, despite being a believer in the consensus of global warming he also thinks is happening there).

More significantly his comments have been widely reported in climate-related blogs and might be read as arguing that CFCs didn't cause the hole. A more careful reading would be that though most experts think they did, we are no longer clear how.

Yes, it is indeed. The ozone hole is still there, and will not recover for another 40 years. Meanwhile, CFCs and other ozone depletion substances (ODS) are banned by the Montreal Protocol.

A 2011 study on the implementation of the Montreal protocol and the effectiveness of the ban is "Science and Diplomacy: Montreal Protocol on Substances that Deplete the Ozone Layer":

The Montreal Protocol on Substances that Deplete the Ozone Layer seeks worldwide phaseout of the production and consumption of ODS. Scientists confirmed that the protocol is working and that the ozone layer is on its way to recovery around the year 2050.

The Ozone Hole web site provides reporting on the ozone layer hole, and as you can see, it's still there in 2011. 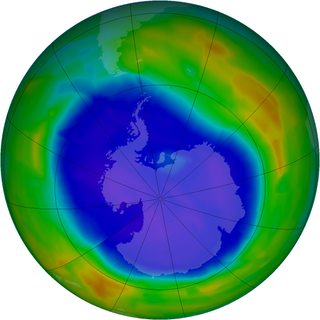 Then, there is the UN-backed "International Day for the Presevation of the Ozone Layer", to keep the attention up. In reality, HCFCs are hundreds of different substances that need to be phased out. We are gradually getting there.

alas ... since oxygen-2 is diamagnetic it will be attracted to the poles. the more oxygen-2 up there the larger the area or volume of the oxygen-2. when oxygen-3 breaks down into oxygen-2 the -2 heads to the poles and forces the -3 away from the poles forming a 'hole' for lack of better terms.

oxygen-3 (Ozone) breaks down for many reasons. CFCs are just one. but the problem is the chlorine is a catalyst and can cause a geometrically larger increase for contribution than say CME coronal mass ejections. the shift to FCs has helped return the o-2/0-3 to the natural state.

13
Is the Amazon being cleared at the rate of X football fields a minute?
23
Is banning plastic bags beneficial to the environment?
24
Is replacing paper towels with electric hand dryer blowers beneficial to the environment?
18
Can indoor plants recycle the air we breathe?
11
Was Greenpeace ever sponsored by KGB?
16
Is 90% of the large fish biomass gone, when compared to pre-industrial levels?
5
Must Japan's population pay for any accident caused by nuclear power plants sold abroad by Japanese companies?
8
Does one Volcanic eruption release more CFC's into the atmosphere than all man made CFC's combined since their invention?
7
Is water vapor responsible for 95% of the greenhouse effect?