One of the arguments I've seen levied against nuclear power is that it's not economically viable.

Compared with some modern renewable energy sources, nuclear power has mixed fortunes: for example it is more expensive than wind, about the same price as hydroelectric power and cogeneration with gasified wood, and cheaper than solar energy using photovoltaic (PV) cells (Öko Institute, 1997 [possible ref]).

Therefore, it isn't a reasonable replacement for coal over wind, co-gen, etc.
For example, US nuclear power generation is federally subsidized, but how does that stack up against the extra burden imposed by complying with additional regulation?

The lower-end of the linked claim by the Friends of the Earth is supported by the US Government figures.

The key claim in the linked article is:

Today the costs of nuclear power are estimated to be, on average, between 2 and 4 times more expensive than electricity generated by burning fossil fuels, about $0.05-0.07/kWh.

The US Energy Information Administration (part of the US Department of Energy) published the "Levelized Cost of New Generation Resources in the Annual Energy Outlook 2011" in November 2010.

Translated into English ("levelized"?!), that means "What cost would energy have in 2016, if we started building a new power-plant with today's technology, without any taxation subsidies?" 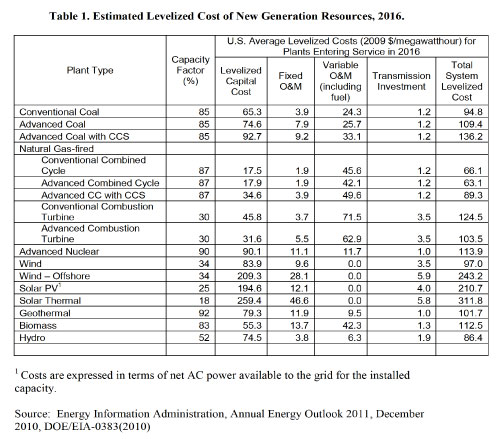 As can be seen, some variants of fossil fuel are in the upper end of that $0.05-0.07/kWh range. (Slightly confusingly, but appropriately for this question, the prices are in 2009 dollars.)

Advanced Nuclear prices are indeed just a smidgin under double that, at around $0.11/kWh.

So, these government figures don't support "4 times more expensive", but they are within a stone's throw of double - i.e. the lower end of the original claim.

Of course, the raw price isn't the only factor, as extrinsic costs must be considered including greenhouse gases, radioactivity, waste disposal, human safety, etc.

Not the answer you're looking for? Browse other questions tagged economics nuclear-energy .