Is carob healthier than chocolate?

It's not hard to find websites claiming carob is better for you than chocolate/cocoa. Many others that say there isn't a difference other than taste.

The reasons I've heard against cocoa is that it's fermented which can cause carcinogens. It's left out to dry in the sun where it can be contaminated by animals. Also that the caffeine and theobromine in cocoa are bad for you and addicting. And that carob has more vitamins and is "alkalising".

Another thing I've seen is that carob is naturally sweeter than cocoa so requires less sugar to sweeten. This sounds reasonable, but if you don't plan to add sugar then doesn't that make unsweetened carob worse than unsweetened cocoa?

This article claims quite a lot of bad things about cocoa, though the way it's written and lack of sources make me think it's bollocks.

This article mentions a few things the other article doesn't, also without sources.

Is there any truth behind carob being healthier than cocoa? To me it seems that cocoa should be healthier.

TL;DR version: Yes, you could say carob is healthier than chocolate. However, I wouldn't call it a "health food" since the difference isn't large and carob isn't exactly a nutritional powerhouse.

I'll try to address your concerns one by one, since you make a lot:

"Cocoa is fermented and contains carcinogens"
"The first stage of chocolate production consists of... fermentation."

There is a microbial succession of a wide range of yeasts, lactic-acid, and acetic-acid bacteria during which high temperatures of up to 50 degrees C and microbial products, such as ethanol, lactic acid, and acetic acid, kill the beans and cause production of flavor precursors. Over-fermentation leads to a rise in bacilli and filamentous fungi that can cause off-flavors.

Ethanol is the alcohol in all alcoholic beverages (not to be confused with methanol, which is very toxic), acetic acid is the main component of vinegar, and lactic acid is used in anaerobic respiration within your muscles while exercising. So as far as "carcinogens" - not from the fermentation product. That's not to say that cocoa/chocolate doesn't contain any carcinogens - there are dozens of compounds in almost everything we eat, but are there any in significant quantities in cocoa? Well, probably not:

Although there was no difference in the incidence of benign mammary gland fibroadenomas in female rats between the control group and any [cocoa powder]-fed group, a marginally significant (P = 0.04) trend test was apparent. The significance of this finding is doubtful, since the incidence of this lesion in the highest dose group was well within the historical control range for this strain of rats. No evidence of carcinogenicity from dietary CP was found in either sex.

"The beans are left out in the sun where they can be contaminated by animals."
Yes, they are. However, like coffee beans - cocoa beans (after being dried) are roasted.

"..caffeine and theobromine are bad for you..."
Well, what do you consider bad? Caffeine is widely used and unregulated, and a dark chocolate bar contains about 30mg of caffeine - less than a cup of tea - which means you'd have to eat about 20 dark chocolate bars in less than a day to enter the "danger zone":

How caffeine affects people varies with their size, their sex, and how sensitive they are to caffeine’s effects. Experts agree that 600mg (four to seven cups of coffee [or 20 chocolate bars]) of caffeine or more each day is too much.

Howevder, that recommendation is far, far below the LD-50 - which is between 125mg/kg and 200mg/kg in animal testing. Although, estimates put LD-50 for humans at between 3g and 20g. You'll note that's between 5x and 30x the amount physicians recommend (or between 20 and 120 cups of espresso). Personally, I wouldn't be worried. Although the claim that caffeine is addictive is correct (see the FDA sheet above), the withdrawal period is a whole 2-3 days and might involve headaches.

As for Theobromine? Well, if you're a Sandostatin patient you may want to avoid it:

Xanthines and theobromines, as well as various foods and wines, contain substances that are provocative for carcinoid crisis and hence can interfere with the effectiveness of Sandostatin. I do agree with Dr. Woltering in recommending carcinoid patients avoid these agents.

A normal person? Well, here's a clip from a Royal Society of Chemistry podcast:

Theobromine is also poisonous to humans, though not to same the degree as dogs and shouldn't cause too much concern. Almost everything is poisonous in a large enough dose (even water, for example) and toxicity is all about dosage. In the case of theobromine, humans have about three times the resistance per kg of bodyweight as does a dog, and are significantly heavier, so we are much less likely to be damaged by our treats. A fatal dose for an adult human would involve eating more than 5kg of milk chocolate. 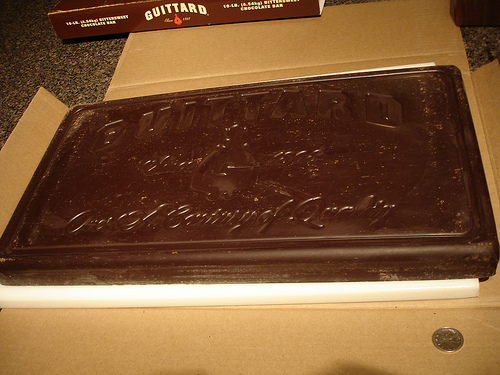 "Carob is more nutritious and requires less sugar than chocolate."

Well, taking some nutrition facts from some 15g of Sunspire unsweetened carob chips (presumably similar to what you'd replace chocolate with):

So, nutritionally speaking, carob does win out. It is ~10% less energy dense and has more Calcium, Sodium, and Dietary Fiber. Though, it's worth it to point out that the 15g of carob chips above only contribute 8% of your Calcium, 2% of your Sodium, and 8% of your Dietary Fiber according to FDA recommendations - making Carob/Cocoa/Chocolate a fairly minor contributor to the overall nutritional makeup of the foods you (ideally) eat.

18
Does changing your pH balance change your mood?

24
Are artificial hormones in beef something to worry about?
27
High Fructose Corn Syrup vs Cane Sugar (aka Battle of the Bulge)
29
Is margarine healthier for you than butter?
23
Is whole-grain bread healthier than white bread?
11
Is waiting until 6 months to introduce solids to babies better?
18
Is brown rice healthier than white rice?
23
Is this description of the processes which take place in the body for an hour after drinking Coca Cola accurate?
2
Can reducing DHT by dietary means reduce or reverse hair loss?
7
Does drinking coffee interfere with magnesium absorption?