Does eating meat increase your risk for cancer?

I just read an article in the german magazine "Der Spiegel" about a recent study claiming that 40% of all cancers are preventable. The article states specifically that one of the factors is the consumption of red meat:

Translated to english this passage reads as

I knew that meat consumption is said to contribute to some health conditions, but I haven't heard about the association with cancer yet.

Is there solid scientific evidence to link the consumption of meat with a higher risk for developing cancer?

According to the study eating meat is a risk factor, although other factors (e.g. smoking) are more significant. 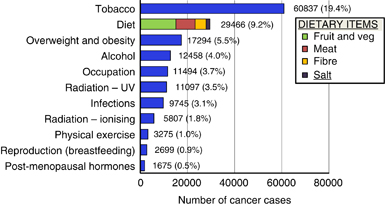 To briefly answer your question: meat consumption is correlated with some cancers.

In the answer to the question Is a vegetarian (vegan) diet more healthy?, I cited an epidemiological study that may be found in Am J Clin Nutr September 1988 vol. 48 no. 3 739-748 (which you may read in full. It compares a large number (n=27,529) of Seventh-Day Adventists.

Please look at my answer at https://skeptics.stackexchange.com/a/2058/1403, where I deal with the math (a little) and describe the differences between correlation and causation.

There are bunch of recent meta-analyses about red meat consumption and various cancers done by Alexander et al. Pretty much every one says the same:

The available epidemiologic data are not sufficient to support an independent and unequivocal positive association between red meat intake and CRC. This conclusion is based on summary associations that are weak in magnitude, heterogeneity across studies, inconsistent patterns of associations across the subgroup analyses, and the likely influence of confounding by other dietary and lifestyle factors.

Overall, summary associations were weak in magnitude (i.e. most less than 1.20), processed meat definitions and analytical comparisons were highly variable across studies, and isolating the independent effects of processed meat intake is difficult, given the likely influence of confounding by other dietary and lifestyle factors. Therefore, the currently available epidemiologic evidence is not sufficient to support a clear and unequivocal independent positive association between processed meat consumption and CRC.

Overall, weak positive summary associations were observed across all meta-analysis models, with the majority being non-statistically significant. Heterogeneity was evident in most analyses, summary associations were sensitive to the choice of analytical model (fixed v. random effects), and publication bias appeared to have produced slightly elevated summary associations. On the basis of this quantitative assessment, red meat and processed meat intake does not appear to be independently associated with increasing the risk of breast cancer, although further investigations of potential effect modifiers, such as analyses by hormone receptor status, may provide valuable insight to potential patterns of associations.

Similarly, no association with red meat was observed for advanced prostate cancer (SRRE = 1.01, 95% CI: 0.94-1.09). A weakly elevated summary association between processed meat and total prostate cancer was found (SRRE = 1.05, 95% CI: 0.99-1.12), although heterogeneity was present, the association was attenuated in a sub-group analysis of studies that adjusted for multiple potential confounding factors, and publication bias likely affected the summary effect. In conclusion, the results of this meta-analysis are not supportive of an independent positive association between red or processed meat intake and prostate cancer.

To reiterate all these papers have at least one researcher in common, so there is possible bias. Also I currently don't have access to full texts so I do not know the funding of these studies and I do not have the expertise to analyze the statistical side much.

Earlier study, Meat consumption and risk of colorectal cancer: a meta-analysis of prospective studies, by different researcher found that:

The possible cancer effects seem fairly small considering that the evidence is epidemiologic. The last paper I mentioned offers risk ratio of 1.28, so somewhat small increase. To put this into perspective CDC claims that smokers are 15-30 times more likely to get lung cancer compared to non-smokers.

95
Is a vegetarian (vegan) diet more healthy?
26
Is salt "white death"?
19
Does a high protein diet increase your risk for cancer?
13
Is red meat responsible for one in ten early deaths?