Is the 2-3-fold rise in HDD price an effect of false shortage?

Beyond any doubt Thailand floods have affected HDD market. However, some analysts say that the effect on the market should be a 10-30% price increase. Meanwhile in the consumer market the increase is 150-300%. 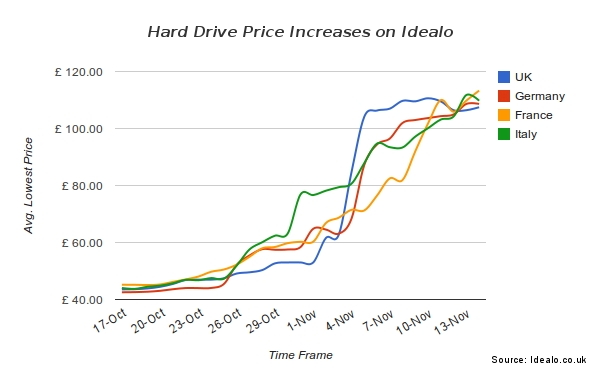 There are claims that this is in fact caused more by big distributors creating false shortage by excessive stockpiling, rather than only the effect of the floods.

Example of such claim:

According to Sander van Veen, storage product manager at Samsung, this increased production cost of Samsung HDDs by 7 to 8 percent. Samsung could not pass that up, because there were already agreements with distributors.

Despite this, the retail prices of Samsung HDDs, as well as those of other manufacturers such as Seagate and Western Digital, increased enormously.

Is there evidence to prove or deny that claim?

It turns out that the spike may be because warranties lengths are to be reduced by two major manufacturers in the future.

The current (i.e. expensive) drives have a significantly longer warranty period than future ones from the beginning of 2012.

Seagate's warranties on certain drives will be reduced as of Dec. 31, and WD will follow beginning Jan. 2. All drives shipped prior to those dates will continue to carry the current warranty term associated with the products.

So the OP may be right: These drives will likely command a premium over those with the 1 year warranty after first of the year.

So while this does not actually answer the question of why it definitely gives motive to horde hard drives with longer warranties that can be expected to command premium prices as over time people will expect that the shorter warranty period will imply low quality product. (Second source(pay walled) that backs up the claim of warranty inferring quality)

Not the answer you're looking for? Browse other questions tagged economics computers price .

13
Does every act of piracy impact revenue by the current content price?
3
Did US Consumer Confidence Index rise up to the highest level in more than 15 years in December 2016?
43
Is "Earth Overshoot Day" a useful or reliable metric of humanity's effect on the world?
7
Would a no-deal Brexit cause the grocery shopping bill of an average UK family to rise by £800/year?