Is this story about someone taking revenge on his cheating ex-girlfriend by tattooing excrement on her back true?

This one is making the rounds on the Internet currently and I'm having trouble finding any reliable source. Most people seem to be citing the following unsourced tumblr post

Tattoo artist Ryan Fitzgerald from Dayton, OH was hit with a $100,000 lawsuit last week by his ex-girlfriend Rossie Brovent. She claims that her boyfriend was supposed to tattoo a scene from Narnia on her back but instead tattooed an image of a pile of excrement with flies buzzing around it.

I've found one post that uses that image from as early as 2009-12-16 (not that it shows much of anything, but might be helpful), the image is also all over image blogspam since that date.

If this story had happened in the past five years, it is reasonable to expect the story would have made the local papers.

The major daily in Dayton, Ohio is the Dayton Daily News.

The searchable archive of the Dayton Daily News goes back at least five years.

Searching the site for tattoo fitzgerald returns a number of unrelated results, but, crucially, demonstrates the archive search function works.

Searching the site for [tattoo Brovent] reveals nothing ("Brovent" being the unusual surname of the woman involved.)

Absence of evidence - where evidence is expected - is evidence of absence.

I conclude this story did not occur in the last five years, with the names given, in the location given.

Via Snopes, the Daily Mail reports there are no corroborating court documents, while the Smoking Gun adds there are no people with those names in the Nexis database, and no registered tattoo artists by that name.

The Smoking Gun suggests that this is a piece of fake news which originates with the following image.

As seen above, the photo appears legitimate. In fact, it first surfaced online about 18 months ago as part of a “Worst Tattoo of the Day” post on the blog I Am Bored.

A review of court indices, of course, shows no such civil complaint has ever been filed (either in federal or state court) by “Brovent.” James Druber, administrator of the Montgomery County Common Pleas Court (where Dayton residents file their six-figure complaints), said that he had heard nothing about the purported tattoo lawsuit.

Additionally, a review of the Nexis database turns up no “Rossie Brovent,” or, in fact, anyone with that surname. And a search for “Ryan Fitzjerald” (with or without the middle initial “L”) turns up nobody with that name. 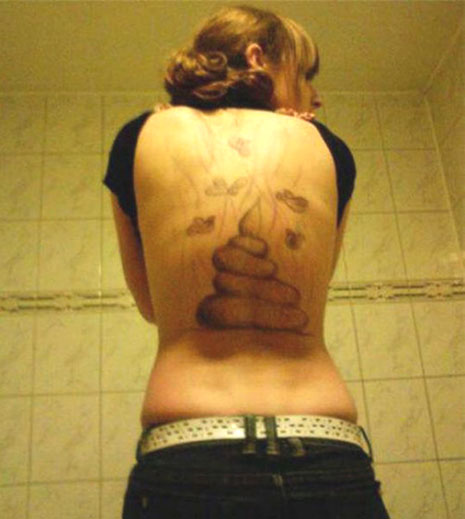 However, looking at the EXIF data you can see the image has been manipulated in Photoshop.

So, using the power of Google I was lead to a French blog post that pointed me to UgliestTattoos.com:

Finally, the page was down, but I was able to retrieve a copy via the magnificient Wayback Machine. The page was cached on January 14th 2010, thus pretty much timestamping the image to the end of 2009.

The following is the (presumably) original image. Note the ugly writings at the bottom, which have been removed in later copies. 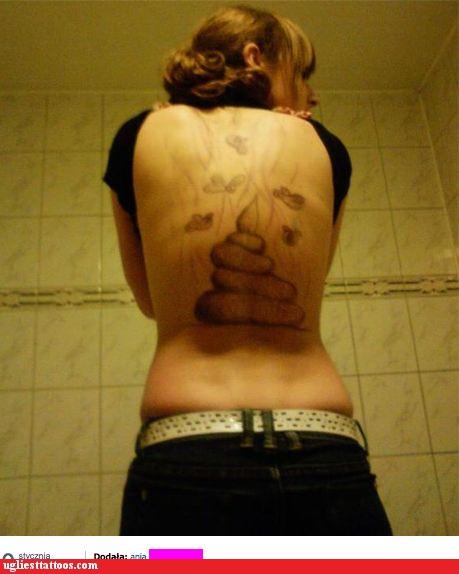 UgliestTattoos.com says it was uploaded directly to the site.

Submitted by: nasza-klasa via Submission Page

This story seem to be false as it states:

Tattoo artist Ryan Fitzgerald from Dayton, OH was hit with a $100,000 lawsuit last week by his ex-girlfriend Rossie Brovent.

Not the answer you're looking for? Browse other questions tagged social-media .