Do McKitrick's criticisms of the IPCC accurately represent their processes?

Whatever your position on climate change the most significant results about the scientific consensus are supposed to emerge from the International Panel on Climate Change (the IPCC). It is an international UN overseen body with the intent, at least, of bringing together the best scientific opinion about a topic of major significance to world governments.

A recent article by Ross McKitrick (one of the better known "climate agnostics" in his own words) analyses and criticises the way the IPCC works. For example, he argues:

IPCC report-writing teams are cherry-picked in an opaque process by a secretive bureau in Geneva, with no effective requirements to ensure representation of diverse viewpoints. Environmentalist campaign groups are heavily overrepresented in the resulting author lists. Conflicts of interest abound throughout the report-writing process, whereby select authors are asked to review their own work and that of their critics, inevitably concluding in their own favour. The expert review process has become little more than elegant stagecraft, creating an illusion of adversarial cross-examination while concealing the reality of unchecked author bias. Unlike in regular academic peer review procedures, IPCC authors are allowed to overrule reviewers, and even to rewrite the text after the close of the peer review process.

These seem like significant criticisms of a supposedly objective process.

His report is called: What is Wrong With the IPCC? Proposals for a Radical Reform and he has written an editorial summarising it in a Canada's Financial Post.

So My question here is: are his criticisms an accurate description of the IPCC process?

NB This question is not about climate change or the historic reliability of the IPCC's reports. It is about whether a critic is honest in identifying flaws in a supposedly objective critical process.

McKitrick's report gives a number of case studies which, he claims, describe issues in the IPCC processes.

A recent case is Sven Teske, a climate campaigner for Greenpeace who was selected by the IPCC as a Lead Author for its recent report on renewable energy (SRREN), which led to the controversies noted above, when a non peer-reviewed Greenpeace report he coauthored became the basis for central claims in the report highlighted in the press release announcing its publication.

Teske was indeed, one of the nine lead authors listed chapter 10 of the report. This chapter cites two articles by Teske, one peer reviewed and one not. However, the scenario mentioned in the IPCC's press release is attributed to the peer-reviewed paper, not the non-peer reviewed one: McKitrick's description here is inaccurate.

Another particularly notable case is Sari Kovats, who, far from being at the “top of her profession,”, was selected to serve as an IPCC Contributing Author in 1994 when she was 25 years old, had no Ph.D. and no academic publications, and was just starting a job as a research assistant at the London School of Hygiene and Tropical Medicine. She began a part-time Ph.D. program in 2001, at which time she was promoted to a term as an IPCC Lead Author. The IPCC Bureau appointed her a third time as Lead or Contributing Author for a total of four chapters of the AR4, as well as expert reviewer. Her Ph.D. thesis wasn’t completed until three years after the AR4 was published.

Contributing authors are at the low-end of the IPCC spectrum. At the time, Kovats was working on editing a review of the topic for the World Health Organisation - this would have meant that she would be reasonable position to be familiar with the literature on the subject. By the time she was selected as a Lead Author, she had authored quite a number of peer-reviewed articles, a fact that McKitrick curiously neglects to mention.

McKitrick quotes from comments submitted to the InterAcademcy Council's review. Some of these comments do suggest real concerns about the IPCC process - but McKitrick's contribution is limited to some quotemining. For example:

Writing of the chapter of which I was a part was dominated by the leading authors – as might be expected. The team members from the developing countries (including myself) were made to feel welcome and accepted as part of the team. In reality we were out of our intellectual depth as meaningful contributors to the process.) Despite this, I am not suggesting that the process of including developing country scientists should be changed – from a point of view of strengthening scientific community, the learning experience of participating in high level science, and from the point of view of political legitimacy, the process of inclusiveness has great value to the IPCC. [the part in italics was excluded by McKitrick]

The next issue McKitrick has is with the number of authors who were also associated with the World Wildlife Fund's "Climate Witness campaign".

It strains credulity to suppose that this overlap is mere coincidence. A more credible explanation is that scientists who openly ally themselves with environmentalist organizations like Greenpeace and the WWF thereby increase their likelihood of being recruited to serve as IPCC Lead Authors.

McKitrick here simply confuses correlation with causation: he immediately leaps to a conclusion that being associated with the WWF causes IPCC authorships, completely ignoring the possibility that, for example, being a top expert in the field would increase your chances of being an attractive recruit to both the IPCC and WWF.

The next section concerns the various stages of the IPCC review process. First, the lead authors and coordinating lead authors write a first draft. This draft is sent out for expert review, and the comments are used to prepare the second draft. The second draft is reviewed by governments and experts, and the comments used to prepare a final draft. This final draft is now subject to acceptance by the appropriate working group. The authors must also work with the review editors; they play a role similar to that of peer reviewers.

McKitrick ignores the existence of the working group sessions and the role of the review editors at this stage; his next few examples (3.1-3.5) are based on the assertion that the final draft goes unreviewed. This is false.

Next, McKitrick discusses figure 2.21 from the Third Assessment Report. In this, he claims that post-1960 data was deleted from Briffa's reconstruction (see below) in order to mask the "divergence problem" known to affect tree ring temperature proxies in the latter half of the 20th century. McKitrick cites a number of climategate emails, claiming that they relate to the divergence problem.

However, as was revealed on Deep Climate, this is not correct. The emails were very selectively quoted to imply that the discussion was about the divergence problem, when actually they concerned discrepancies between the reconstructions during the 17th and 19th centuries. Removing the late-20th century data would not have "fixed" that.

For example, McIntyre (in the post referenced by McKitrick) quotes Climategate email 0938018124.txt, sent by Michael Mann to Keith Briffa, Chris Folland, and Phil Jones. The relevant paragraphs are below, with the parts that McIntyre choose to include in italics. I have also added bold for emphasis:

I am perfectly amenable to keeping Keith's series in the plot, and can ask Ian Macadam (Chris?) to add it to the plot he has been preparing (nobody liked my own color/plotting conventions so I've given up doing this myself). The key thing is making sure the series are vertically aligned in a reasonable way. I had been using the entire 20th century, but in the case of Keith's, we need to align the first half of the 20th century w/ the corresponding mean values of the other series, due to the late 20th century decline. [Jivlain: This email was sent before Briffa's 2000 paper was published. Here, Mann explicitly wants to keep Briffa's 1999 data in the IPCC report, including the part that diverges from the instrumental record]

So if Chris and Tom (?) are ok with this, I would be happy to add Keith's series. That having been said, it does raise a conundrum: We demonstrate (through comparining an exatropical averaging of our nothern hemisphere patterns with Phil's more extratropical series) that the major discrepancies between Phil's and our series can be explained in terms of spatial sampling/latitudinal emphasis (seasonality seems to be secondary here, but probably explains much of the residual differences). But that explanation certainly can't rectify why Keith's series, which has similar seasonality and latitudinal emphasis to Phil's series, differs in large part in exactly the opposite direction that Phil's does from ours [Jivlain: You can see the original draft of the graph (using Briffa 1999) below. You can see that both Briffa's and Phil Jones' data differ from Mann's data, during the 17th and 19th centuries, in the opposite direction. In the late 20th century, Jones' data is consistent with Mann's.] This is the problem we all problem we all picked up on (everyone in the room at IPCC was in agreement that this was a problem and a potential distraction/detraction from the reasonably concensus viewpoint we'd like to show w/ the Jones et al and Mann et al series.

So, if we show Keith's series in this plot, we have to comment that "something else" is responsible for the discrepancies in this case. Perhaps Keith can help us out a bit by explaining the processing that went into the series and the potential factors that might lead to it being "warmer" than the Jones et al and Mann et al series?? [Jivlain: Briffa's series is warmer in the 17th and 19th centuries, and colder in the late 20th century. Again, it's clear that they are discussing the 17th and 19th centuries here] We would need to put in a few words in this regard. Otherwise, the skeptics have an field day casting doubt on our ability to understand the factors that influence these estimates and, thus, can undermine faith in the paleoestimates. I don't think that doubt is scientifically justified, and I'd hate to be the one to have to give it fodder! 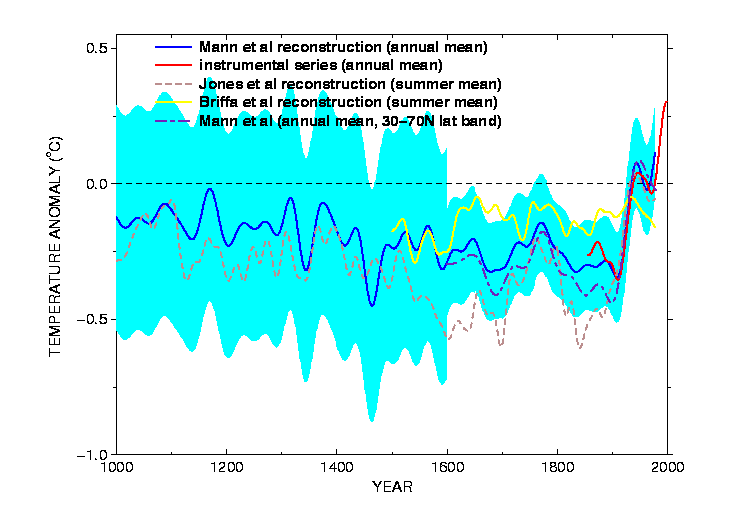 15
What are the greatest successes of long term climate prediction?
3
Will reducing atmospheric CO₂ reverse the effects of climate change over a few decades?
13
Are the IPCC climate change models overestimating sensitivity to carbon dioxide?
9
Did the IPCC obfuscate the evidence in a way that obscures the discrepancy between previous climate models and recent observations?
48
Does the logarithmic nature of global warming invalidate climate change claims?
15
Whose account of the response to Michael Mann's original "hockey stick" analysis is correct?
6
Is climate change causing more storms and worse storm damage?
10
Has non-TSI solar output increased over the past century in ways the IPCC climate models ignore?