Is it possible to identify where Euro banknotes are from?

Some websites claim that you can know which country printed an euro banknote, by looking at the serial number. Is that technique fool-proof ?

This really depends what you mean by where Euro banknotes are from. It can either mean by which country they are issued (which would be most logical) or where they were physically printed (note, that physically printing is not done by all Eurozone countries, and some non-Euro countries do the printing).

In either case you can find information in the numbers printed on banknotes, but only in the first case it's the serial number.

euro notes do not have a national side indicating which country issued them (which is not necessarily where they were printed). This information is instead encoded within the first character of each note's serial number. (source: Wiki)

However, where the banknotes have been physically printed can be determined by another number:

On each of the seven denominations of the banknote, there is a small six-character printing code which uniquely identifies the printing information of each banknote. These printing codes have an initial letter, followed by three digits, followed by a single letter, and ending in a digit, for example, "G013B6". The initial letter identifies the printing facility, as described below. (source: Wiki)

Printing code is bit harder to see than the serial number: 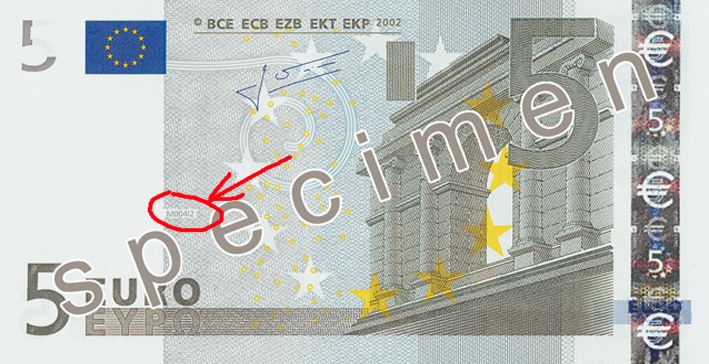 In case of the banknotes issued by Greece, they may have been physically printed in 5 different locations: Austria, Netherlands, Germany (both locations) and the Greece itself.

In the above pictured partial sample banknote, the letter code "S" means that Banca d'Italia (Italy's central bank) commissioned the printing; for Greece, there would be a letter "Y" instead. I've included the complete list of country codes (which shouldn't be confused with the ISO's list of official international country codes), which is also included on that web page, here for your convenience:

(1) Uncirculated euro banknotes issued by the Banque centrale du Luxembourg bear the code of the central banks of the countries where the banknotes for Luxembourg are produced.

Not the answer you're looking for? Browse other questions tagged economics currency .

5
Does the weather affect the selling of your house?
7
Do Americans spend 49 billion dollars a year on pets?
12
Are the specific claims from the “WSJ 16” climate skeptics true?
6
For the same size, is real estate cheaper in Australia than Japan?
12
Did DR Congo use banknotes with hole where Mobuto's face used to be after he was deposed?
13
Do one in three workers in Romania work for minimum wage?
10
Can Technical Analysis (TA) predict future market prices?