Did travelers by troika throw passengers before the wolves, to save others?

In several places, I have seen reference to the story that in the past in Russia, travelers by troika might throw one of the travelers before chasing wolves in order to save the other travelers (wolves will be busy for a little while eating one of the children, troika races on to safety). I like the story, but I'm sceptical still, since wolves don't really tend to chase people. Or did they in the past?

I have seen several references, but none reliable. I know it from the Dutch song "Dodenrit" (original in Dutch, or translated to English via Google Translate), as well as arabnews.com, to mention a couple.

I'd love to read some article digging into the background of this :)

Edit: source from the article, that is mirrored at several places

The troika hurtles across the frozen plain. The wolves are close behind, and from time to time a peasant is hurled from the sleigh in the hope of letting the more important people escape. But nothing distracts the pack for long, not even when the occupants of the sleigh move up the pecking order and throw a couple of minor aristocrats to the wolves.

Wait! What’s this? They have thrown a newspaper to the wolves? An entire newspaper, with two hundred full-time employees and hundreds more freelance contributors? How do they think that that will help them to get away?

The troika is called News International, the newspaper wing of Rupert Murdoch’s globe-spanning media empire. The paper that has just been sacrificed is the News of the World, a Sunday tabloid that claims to have more readers than any other paper in the English-speaking world.

The NoW makes a tidy profit, but this Sunday’s edition will be its last. After 168 years, the institution that pioneered the art of persuading the emerging class of semi-literate English people to buy newspapers has been shut down by its owners.

Being a Russian myself I read the article, you quoted, with curiosity. I never heard anything about throwing passengers from troikas to wolves. And there is a major error there: aristocrats never rode together with peasants. 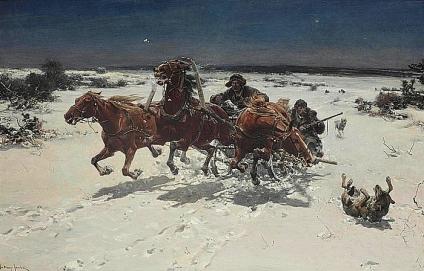 Trying to answer your last question:

Yes, there is. There is a Russian idiom: "to throw to the wolves". In the times of famine, peasants left their little children, whom they couldn't feed, in the wood, where they were eaten by wolves.

This situation is also described in the German folklore. In the fairy tale "Hansel and Gretel":

When a great famine settles over the land, the woodcutter's second, abusive wife decides to take the children into the woods and leave them there to be by themselves, so that she and her husband will not starve to death

Not the answer you're looking for? Browse other questions tagged history zoology .

33
Did Hitler survive until 1962?
13
Did audiences throw tomatoes at performers they disliked?
15
Did a radio DJ lock himself in the studio and play the same song on repeat?
2
Did the Britons start growing crops before 1500 BC?
21
Did the ballet/orchestral work 'The Rite of Spring' provoke a riot?
7
Did lions in Ethiopia save a 12 year old girl from rape?
60
Were Mermaid passengers shipwrecked by 5 different vessels before being successfully rescued?
5
Did a Chinese zookeeper lick a monkey's anus for an hour in order to save its life?
14
Did passengers of the Titanic predict/foreshadow its sinking?