However, Wikipedia states that it is still being considered and investigated and so has apparently not been completely dismissed.

Interest in Lamarckism has recently increased, as several studies in the field of epigenetics have highlighted the possible inheritance of behavioral traits acquired by the previous generation

I am getting out of my depth here, however I thought epigenetics was genes being suppressed or influenced by the environment which is similar but separate from learned traits being passed on.

Is Lamarckian evolution disproven and being conflated with epigenetics here, or is there still credence being given to the theory that traits acquired in a lifetime can be passed on?

I’m sorry, this is a long one. Unfortunately, the topic is complicated and I try to make it as understandable as possible. I’ll omit most of the technical details since they are hard to explain and don’t add a lot.

Epigenetic modifications do not constitute, nor enable, Lamarckian inheritance. Papers and reviews that claim this use a convoluted and ultimately useless definition of Lamarckism and inheritance.

However, a paper from December 2011 does actually demonstrate a very specific case where Lamarckian inheritace does occur (without epigenetic involvement). It bears repeating that this does not in the least violate Darwinism. In fact, the results, though surprising, are entirely in line and predicted by Darwinism – the mechanism actually relies on Darwinism. Contrary to popular belief, Darwinism and Lamarckism are not actually in opposition.

The problem, as so often, is the unclear definition of terms: what, exactly, is Lamarckian inheritance? Ask five scientists today and you will get six answers. And Lamarck himself would have disagreed with all of them. This is simply due to the fact that Lamarck wasn’t aware of a lot of mechanistic concepts that were developed long after his death – such as the distinction between somatic cells and germline.

This distinction leads to the concept of the Weismann barrier and it’s of eminent importance for our modern understanding of inheritance (and hence Darwinism): simply put, the Weismann barrier postulates that in order for traits to be inheritable, they need to be carried in the germline. As a consequence, modifications in the soma (non-germline cells) are not inherited.

Most scientists today see this as a direct opposition to Lamarckism.

But there are of course plenty of organisms (most, in fact) that do not have a distinction between soma and germline: notably, all unicellular life. For those life-forms, all genetically acquired traits (be it through mutation or through the integration of plasmids) are heritable. This is trivially true.

Once again, there are different definitions, but the generally agreed-on definition of epigenetics today runs something like this:

Epigenetics is the study of heritable changes in cell behaviour that are not due to changes in the genetic sequence.

Notice that here, “heritable” does not refer to heritability of organisms, just of cells: the daughter cells of a dividing mother cell inherit its epigenetic traits (and once again, this isn’t Lamarckism, it’s not even Darwinism, it’s on a much lower level).

There are several known mechanism of epigenetics, notable among them methylation and histone modification. How exactly they work isn’t terribly relevant; what’s important is that they modify the accessibility of genes on the genome: they control whether a cell can actually read a section of the genome and use it.

Cells use this to determine their specificity: how do muscle cells and brain cells know which job to do? Epigenetic modifications are (part of) the answer.

How Heritable Are Epigenetics?

Epigenetics are not generally heritable (due to the Weismann barrier). There have been several papers that, using similar lines of reasoning, have tried to argue that epigenetics can lead to the inheritance of acquired traits.

I will showcase the argument using one well-known paper, Epigenetic programming by maternal behavior [1].

The paper examined two different groups of mice which were raised by two phenotypically different mothers. Group 1 had been licked and groomed by their mother in the first six days after their birth. Group 2 hadn’t. 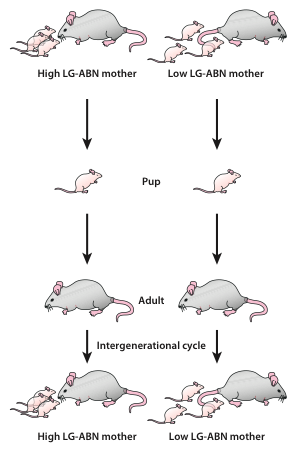 It was shown that the mechanism behind this is epigenetic: pups of a high LG/ABN mother had increased serotonin levels which in turn led to decreased methylation of some genetic regions which modified their behaviour. And since the behaviour is self-perpetuating, the authors argued that it’s a form of inheritance (“soft inheritance”).

However, this is in fact not entirely true: the “inheritance chain” could be broken simply by raising the pups away from their mother for the first six days after birth. “True” inheritance would’t be broken by that. In fact, the whole argument is similar to saying that nationality is passed on by Lamarckian inheritance because children raised by, say, French parents are themselves predominantly French, and raise French kids.

Other papers (such as [2]) fall prey to similar flaws. Jerry Coyne has aptly summarised the whole field as follows:

In nearly all of these examples, the changes disappear after one or two generations, so they couldn’t effect permanent evolutionary change. […] I am not aware of a single case in which an adaptive change in an organism – or any change that has been fixed in a species – rests on inheritance that is not based on changes in the DNA.

This is pretty damning: none of these papers demonstrate what could reasonably be termed Lamarckism.

In December 2011, there has finally been a paper which convincingly demonstrated a real case of Lamarckian inheritance: Transgenerational Inheritance of an Acquired Small RNA-Based Antiviral Response in C. elegans [3].

The paper examines C. elegans (a nematode or roundworm which serves as a model organism in biology). Normally, those nematodes don’t get infected by viruses because they have developed a highly sophisticated defence mechanism called RNA interference (RNAi). This mechanism relies on so-called small-interfering RNAs (siRNAs) produced by the cell which recognise and pair up with viral RNA that has entered the cell. Those complexes are then in turn destroyed by the cell.

The paper looked at nematodes where the RNAi mechanism had been knocked out (removed): the cells could no longer generate siRNAs, and hence had no defence against the virus invaders. Now, if you artificially put siRNAs into the cells, those cells can once again defend against a specific virus. The authors could show that under very specific circumstances, putting siRNAs into the cells was enough to trigger an inheritable virus resistance, even though the siRNA-generating mechanism was still knocked out.

The nematodes had inherited an acquired, non-genetic trait (virus resistance), and this inheritance was sustained over many generations.

Since I’ve explicitly mentioned the Weismann barrier before, I should note that this experiment does not invalidate the Weismann barrier: this heritability only occurred in very specific circumstances, namely, when all of the cells in the nematode were provided with siRNAs. This notably includes the germline cells.

Despite frequent claims to the contrary, no connection between epigenetics and Lamarckism has ever been demonstrated. Inheritance of acquired traits from epigenetic modifications is transient at best, and it’s contested whether it constitutes inheritance at all.

On the other hand, a clear example of Lamarckism has now been observed, albeit under very constrained, artificial circumstances. And while this is a very interesting result, it is not surprising: any competent biologist would have predicted the paper’s result, given the paper’s premises, and ignoring potential ways in which the experiment could go wrong, because its outcome is entirely predicted by modern biology.

There are a lot of misconceptions flying around. Articles with titles like Why everything you've been told about evolution is wrong abound. There is no nice way to put it – these pronouncements are untrue. Nothing found in the papers cited here, nor in similar papers, either directly or implicitly contradicts “conventional evolution” – Darwinism. In fact, all of these studies heavily rely on predictions made by modern evolutionary theory. It’s just blatant misreporting by the media, due to two unfortunate facts: most science journalists don’t understand the science, even rudimentarily; and most scientists can’t even explain their research clearly to their colleagues, let alone lay people.

Over the years I've heard explanations from a variety of sources, including a television documentary, that elephants have "generational memory" where the off-spring inherit certain memories of their mothers.

The following two paragraphs below (relevant text emphasized to save your time) address this as well as the idea that new traits, such as specifically switching to a nocturnal lifestyle (in this case, to avoid a hunter), can be passed on to the next generation:

Source: http://www.heise.de/tp/artikel/2/2192/1.html - Mammals and the Further Rise of Mind
(4th and 5th paragraphs from the final section entitled "Learning Machines")

Pre-human mammals not only network their informational breakthroughs across substantial distances, they also spread the tendrils of what they've learned into the future, thus penetrating both space and time. Elephants, for example, pass behavioral memes from one generation to the next. In 1919, the citrus farmers of South Africa's Addo Park wanted to get rid of a herd of 140 elephants who'd been wreaking havoc with their crops. They called in a hunter who shot the elephants painfully, one by one, while their family members watched the dying agonies. After a year, only sixteen to 20 elephants still remained. But they had adapted their lives to the hunter's presence. In a most un-elephant-like manner, they had become nocturnal, hiding in the bush until night fell, and stealing out to feed in utter darkness. The adaptation worked. The hunter eventually gave up. Then, in 1930, the elephants were granted permanent sanctuary. There were no more gunshots, no more attacks by murderous human beings. Yet 45 years later, the elephants retained their reclusive, night-time way of life. The veterans of 1919 had died off, but the group held on to patterns designed to cope with a danger that had long since past. Those patterns leaped the boundary from generation to generation and mind to mind. Implicit memes had shaped communal sensibility as surely as genes sculpt the rippling canyons of the brain.

Advanced brains were, in fact one key to the elephants' multi-generational memory. The other was the bond of motherhood and matriarchy. Elephants, like the humans who would not appear for over 20 million years, possessed a cerebral cortex of substantial size. This is less unusual than it seems. Biological anthropologist Robin Dunbar has shown that the larger the size of a social unit, the larger the cortex of each member. This is even true within a single species. Bats were one of the earliest mammals to evolve. So ancient is their pedigree that many scientists have referred to them as "living fossils." Like elephants, these flying mammals live long lives (one tagged wild bat in New England survived well over 31 years).

Further reading on this subject of genes carrying memory:

Hopefully this at least helps to answer your question about acquired traits being passed on to offspring.

6
Can phobias be genetic, but created in one generation and not by natural selection?