Was the experiment with five monkeys, a ladder, a banana and a water spray conducted?

I've found the following picture online. It is about the moral/paradigm behind consistent behavior. 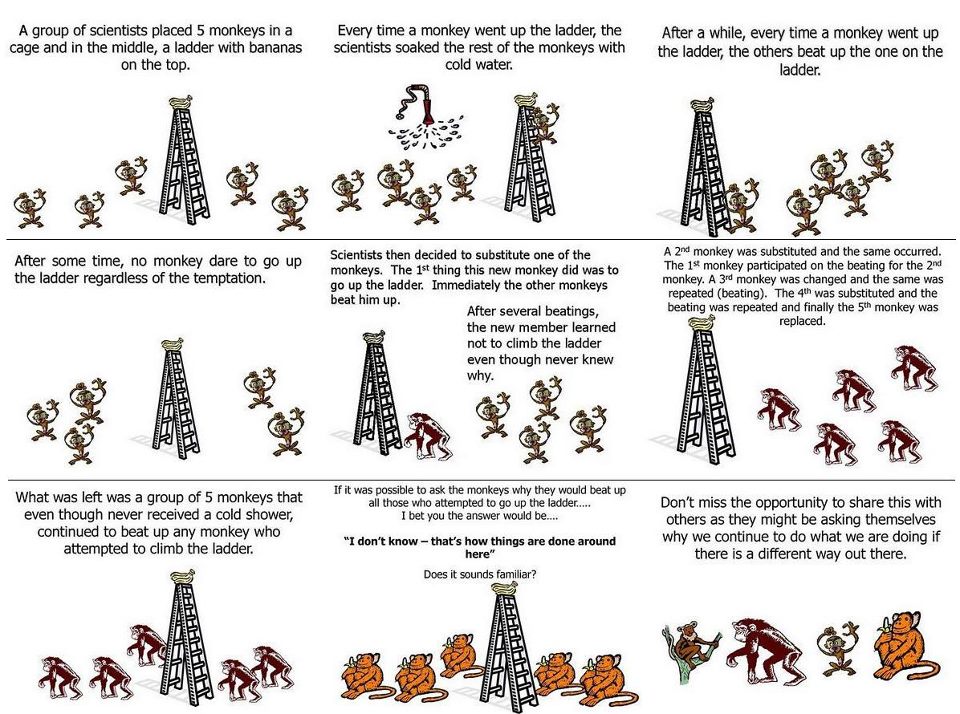 This seems like an experiment, but now I'm wondering... Was this experiment ever conducted? If not, was any similar experiment conducted that shows the same effect?

The earliest mention I could find of this experiment was in the popular business/self-help book, Competing for the future by Gary Hamel and C. K. Prahalad (1996). Here is the quote from the book:

4 monkeys in a room. In the center of the room is a tall pole with a bunch of bananas suspended from the top. One of the four monkeys scampers up the pole and grabs the bananas. Just as he does, he is hit with a torrent of cold water from an overhead shower. He runs like hell back down the pole without the bananas. Eventually, the other three try it with the same outcome. Finally, they just sit and don’t even try again. To hell with the damn bananas. But then, they remove one of the four monkeys and replace him with a new one. The new monkey enters the room, spots the bananas and decides to go for it. Just as he is about to scamper up the pole, the other three reach out and drag him back down. After a while, he gets the message. There is something wrong, bad or evil that happens if you go after those bananas. So, they kept replacing an existing monkey with a new one and each time, none of the new monkeys ever made it to the top. They each got the same message. Don’t climb that pole. None of them knew exactly why they shouldn’t climb the pole, they just knew not to. They all respected the well established precedent. EVEN AFTER THE SHOWER WAS REMOVED! (Source)

The authors did not provide a source for this claim. This story was later repeated in various other popular business/self-help books.

Every source online I could find erroneously attributed the experiment to one of the above authors. No one, anywhere, seems to have a reference to the actual experiment.

C. K. Prahalad is deceased, but Gary Hamel is still alive. I tried contacting him several times, but unfortunately both he and his secretary were very evasive. The best I could get was

Our apologies, but Professor Hamel does not have the original source information at hand in terms of your request.

Given that there seems to be no evidence anywhere of this experiment ever actually taking place, that all trails of references eventually lead to the claim in this book, and that this is the earliest available mention of the experiment, until further evidence becomes available the most reasonable conclusion is that C. K. Prahalad or Gary Hamel made up the experiment for their book.

Even if the above authors were not the creators of the myth, there is still reason to believe that, as @Chad puts it (comments above), this claim is an "extrapolation of predicted results combined with humanized responses."

Here is a quote from an "anthropology professor who's worked with hundreds of monkeys over the last 30 years." When asked what he thought of the experiment, he responded succinctly with:

If you have bananas on a pole, you'll lose your bananas.

TL;DR: It sounds like a similar monkey experiment did take place, and the results were similar to that presented in the picture, but if this is the same experiment, most of the details are wrong.

The first google result for monkeys ladder experiment contains to the following information:

Stephenson (1967) trained adult male and female rhesus monkeys to avoid manipulating an object and then placed individual naïve animals in a cage with a trained individual of the same age and sex and the object in question. In one case, a trained male actually pulled his naïve partner away from the previously punished manipulandum during their period of interaction, whereas the other two trained males exhibited what were described as "threat facial expressions while in a fear posture" when a naïve animal approached the manipulandum. When placed alone in the cage with the novel object, naïve males that had been paired with trained males showed greatly reduced manipulation of the training object in comparison with controls. Unfortunately, training and testing were not carried out using a discrimination procedure so the nature of the transmitted information cannot be determined, but the data are of considerable interest.

The above quote is found on page 88 of the 1976 document quoted above.

It is possible the claim is referring to this experiment, with diverging details, or that another experiment took place that was closer to the details in the claim.

0
A source for the monkey ladder water experiment?
16
Does a monkey/ape flee from half peeled bananas?
5
Is the "Most people are sheep" video genuine?
2
Can elephants be held by a single piece of rope if they grow up conditioned to believe they cannot break free?

5
Have any questions where the underlying cause was thought to have had both a psychological and social component been thoroughly settled?