Is Mephedrone as dangerous as UK government advice claims?

Mephedrone is an amphetamine-like designer drug that was, until recently, not strictly illegal in the UK. 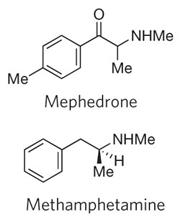 . See Nature news story here which also covers the controversy around the original ban in the UK.

Recently the head of the government's Advisory Committee on the Misuse of Drugs (ACMD), Les Iverson said (newspaper report here) commenting on recently released numbers about the safety of mephedrone:

Users are playing Russian roulette. They are buying substances marked as research chemicals. The implication is that you should do the research on yourself to find out whether they're safe or not. This is a totally uncontrolled, unregulated market.

in the past two years mephedrone had been confirmed as a factor in 42 deaths and had not been ruled out as contributing to another 56.

So that looks like a clear case that the drug is dangerous (if not at russian roulette levels of danger). But we have reasons to be suspicious. The ACMD suffered serious political interference when its previous chair was sacked for pointing out that the actual hard evidence was not consistent with government policy on a variety of illegal drugs (see the guardian report here). The original ban of mephedrone was driven more by a media campaign than by hard science (BMJ new report here).

So if we can't fully trust what advice government gives, is there evidence that mephedrone is dangerous and, if so, how dangerous?

PS don't confuse mephedrone with the other similarly spelt compounds like methadone (I spelt it wrong about half the times I used it here and I had to teach my spell checker not to change it to ephedrine or methadone).

Update David Nutt, the sacked chair of the ACMD, wrote a book on the harms of drugs, Drugs Without the Hot Air, in an attempt to present clearheaded evidence about harms and strategies to minimize them. His comments on mephedrone are worth adding (p117 in the UK paperback):

Of the dozens of deaths in 2009 that the media attributed to mephedrone, only two have been confided as being directly and solely caused by the drug.

...because many people switched to using mephedrone from cocaine, which is a much more harmful drug, it may actually have saved lives overall.

Short answer: nobody knows, because the research simply hasn't been done yet. It's a safe bet that the more hysterical responses are utter nonsense, but the safety of mephedrone (particularly in the long term) is still an unanswered question.

"Four deaths related to the drug 4-methylmethcathinone (mephedrone) are reported. [...] Of the four deaths, one was attributed to the adverse effects of mephedrone, with cardiac fibrosis and atherosclerotic coronary artery disease as a contributing factor. [...] The second death was attributed solely to mephedrone. A 19-year-old male took mephedrone as well as alcohol and “ecstasy”; analysis disclosed mephedrone (2.24 mg/L femoral venous blood) and 3-trifluoromethylphenylpiperazine (3-TFMPP). In the third fatality, a 55-year-old female was found dead in bed; the death was attributed to the combined effects of mephedrone and methadone. Analysis of femoral venous blood revealed the prescribed drugs diazepam, nordiazepam, olazepine, and chlorpromazine metabolites together with methadone (0.3 mg/L) and mephedrone (0.13 mg/L). In the fourth case, a 17-year-old male car driver was involved in a vehicular collision and died of multiple blunt force injuries. Analysis revealed mephedrone in femoral venous blood (0.24 mg/L)."

However: there have been a handful of deaths where mephedrone is unambiguously implicated. Mephedrone is not a perfectly safe drug; if you are sufficiently foolish or unlucky, it can kill you.

But the numbers are very low. Given the large-scale use of mephedrone in the UK and Europe over the last few years, the rates of acute fatality from mephedrone have actually been remarkably slight. For more detailed discussion, I'd recommend reading the series of review articles that have been produced in the last year by Winstock et al.

Based on the clinical evidence, mephedrone appears to be relatively safe in relation to many other drugs of abuse, at least from the point of view of acute toxicity. The typical pattern of mephedrone ER presentations would appear to be a patient with sympathomimetic symptoms (ie: racing heart, headache, anxiety) which is then resolved through simple bedrest, observation and sometimes the use of anxiolytic drugs (ie: tranquilisers). See a series of case reports on this. There is some clinical suggestion that mephedrone may interact in a nasty way with SSRI antidepressants (see Garrett G, Sweeney M (2011) The serotonin syndrome as a result of mephedrone toxicity. BMJ Case Reports.), but that is very speculative.

Mephedrone appears to be particularly dangerous for injecting users. Mephedrone solutions are somewhat acidic, and users routinely report that snorting or injecting mephedrone is intensely painful. A study of Irish mephedrone injectors found truly gruesome consequences were common amongst their participants.

From the abstract of that paper:

"Although participants were aware of risks and safe injecting practises, compulsive re injecting with excessive binge use over long periods of time was common. Nasal to injection route transitions, intense paranoia, violent behaviour and aggression, emergence of Parkinson type symptomatologies (in the form of spasms and ‘wobbling’), and permanent numbness in lower extremities were reported. Multi and serial drug injecting with heroin was used in efforts to manage the intense rush and avoid unpleasant comedown. Participants reported limb abscesses, vein clotting, damage and recession resulting from product toxicity, crystallisation of the products when diluted and flushing practises. Seven participants were homeless, with groin and street injecting common."

From the body of the paper:

From one of their participants:

"it clots up your veins twice as fast as anything else...that’s one thing I did learn fast from it, say you used one vein on it and got two hits out of it, you wouldn’t get the vein again, you’d have to move onto a different vein to get another hit out of it, that’s why everyone started using their groin".

Acute toxicity is not the only way in which a drug can be harmful. There is good evidence from both anecdotal user reports and ongoing neuroscientific research (not yet published, unfortunately, so I can't provide a reference...) that mephedrone is intensely addictive. There is also some evidence that regular mephedrone use may cause lasting memory impairment: see Freeman TP, Morgan CJA, Vaughn-Jones J, Hussain N, Karimi K, Curran HV (2012) Cognitive and subjective effects of mephedrone and factors influencing use of a 'new legal high'. Addiction 107: 792-800.

It would also be unsurprising to find that heavy mephedrone use causes long-term undesirable alterations in neurotransmitter systems, with possible lasting psychiatric consequences (clinical depression, most likely). But it's just too early to say: the research hasn't been done yet, and it will take several years of work before we have a reasonably accurate picture of the risks and harms of mephedrone consumption.

From the basic science perspective, very little has been done. The existing experimental neuroscience literature is limited to the following:

One study looked at dopamine and serotonin release in the nucleus accumbens (a key addiction-related area, part of the mesolimbic dopamine pathway) following low doses of mephedrone in rats, and found that it is a potent releaser of neurotransmitters in this area, with effects comparable to methamphetamine with dopamine and MDMA with serotonin: see Kehr J, Ichinose F, Yoshitake S, Goiny M, Sievertsson T, Nyberg F, Yoshitake T (2011) Mephedrone, compared to MDMA (ecstasy) and amphetamine, rapidly increases both dopamine and serotonin levels in nucleus accumbens of awake rats. Br J Pharmacol.

One study gave mice a fairly hefty binge-style treatment with mephedrone before examining their striatums (a part of the brain that is related to both movement and addiction, and is very strongly activated by mephedrone) for signs of toxicity, inflammation or adaption. They found no significant differences between the brains of their drug-treated and control animals. See Angoa-Pérez M, Kane MJ, Francescutti DM, Sykes KE, Shah MM, Mohammed AM, Thomas DM, Kuhn DM (2012) Mephedrone, an abused psychoactive component of ‘bath salts’ and methamphetamine congener, does not cause neurotoxicity to dopamine nerve endings of the striatum. Journal of Neurochemistry 120: 1097-1107.

One study did find persistent alterations in neurotransmitter systems in rats that were dosed under a "binge" paradigm. However, this study utilised fairly high dosages and elevated ambient temperatures; as mephedrone (like many other stimulants) exacerbates hyperthermia in such conditions, it's unclear whether the findings were purely due to the mephedrone or instead represent a combination of the effects of mephedrone and sustained hyperthermia. See Hadlock GC, Webb KM, McFadden LM, Chu PW, Ellis JD, Allen SC, Andrenyak DM, Vieira-Brock PL, German CL, Conrad KM, Hoonakker AJ, Gibb JW, Wilkins DG, Hanson GR, Fleckenstein AE (2011) 4-Methylmethcathinone(mephedrone): neuropharmacological effects of a designer stimulant of abuse. J Pharmacol Exp Ther.

(Note: I am one of the authors of that last paper.)

Not the answer you're looking for? Browse other questions tagged safety recreational-drugs .