This is a movie and police-procedural TV-show cliche that we all know: The police captain (or insert-your-favourite-law-enforcement-officer) realises he (I can't recall it ever being a she.) has a "situation" involving bad guys inside a building that he needs to get out. He shouts: "Somebody get me the plans to this building!". Minutes later the cops are spreading out the blueprints on the bonnet of the car to find the best entry point.

The Bourne Ultimatum is a random example:

VOSEN: Get an elevation and a floor plan, tic-tac-toe.

In that film, the blueprints were immediately sent to an agent's phone.

I know it is all exaggerated in the movies, but my question is "Is there a morsel of truth to this?"

Is it a legitimate and common police tactic to obtain copies of floor plans before embarking on planned raids? Or is this another item that cops roll their eyes at when they see it on television?

I'd accept it as a "Yes" if it was true in any major city in the world. In the absense of that, I'd (provisionally) accept it as a "No" if there were any official denials from major jurisdictions. Open to other evidence too.

It's at least possible for the police (or anyone else) to do this in Sweden, since the documents pertaining to the building permit include a complete building plan.

All documents filed with a government agency (local or national) in Sweden by default becomes parts of the public record, freely available for everyone (citizen as well as foreign), unless another law specificity puts them under secrecy. No such law protects building plans, which are handled by a branch of the municipality.

Under Swedish law, a request for such public documents must be met ASAP, i.e. if the police, or even a private citizen, comes in person to request a building plan it must be fetched and copied for them right away. Some municipalities make building permits available at public computer terminals for easy access by the public.

Sorry to say, I have no knowledge about if the Swedish police usually uses this possibility in the manner specified by the question.

Yes, it is possible to do this in the United States depending on several factors. But unless the CIA goes around the world collecting and storing blueprints (which they might), it is probably a plot device.

It would be terrible boring to watch someone file a Freedom of Information Requst (FOI) or wait for some clerk in some city track down a set of construction documents that might or might not exist. If there was an international spy in my city of 35,000 people in rural Missouri, in a building built since the 1960s, I most likely could get them a copy of a building plan. But they might wait an hour while I found it, scanned and emailed it to them. Jason Bourne would be long gone...

In the United States, it depends on the locale and the policies that govern the area. These policies can affected by local, county, state and federal regulations.

In Missouri, any record that I create can be considered a Public Record and therefore open to request by anyone who requests the information be it a citizen, police, or clandestine organization. Freedom of Information Act

A "record" is defined as any "document, book, paper, photograph, map, sound recording or other material, regardless of physical form or characteristics, made or received pursuant to law or in connection with the transaction of official business" (109.210(5) RSMo). This definition includes those records created, used and maintained in electronic form.

This includes construction documents that are submitted to Community Development for a construction permit. However, how long that document is kept or its availability is subject to other factors like retention policy.

For example, the state of Missouri does not have state enforced building codes in where as they do not conflict or meet Federal codes (usually EPA sanitary waste rules).

To ensure that a set of building documents meets all these adopted building codes, we require at least two sets of plans, an office copy and a job copy. After plan review and approval, the job copy is returned to the general contractor. This should be the document that used for construction, and it should be identical to the office copy that the city then keeps. Any changes have to be approved otherwise the construction can be halted, torn-out or face the city in court.

Once the project is completed we issue a Certificate of Occupancy and Completion (CO) that generally states that the project was completed as the city expects and meets our minimum safety laws. This is usually about a year after construction is completed due to runoff prevention (grass) not growing at the time. We then digitally scan the plans for backup on our server, and place the paper document into physical archive (annoyingly Missouri's retention policy only accepts paper or microfiche). 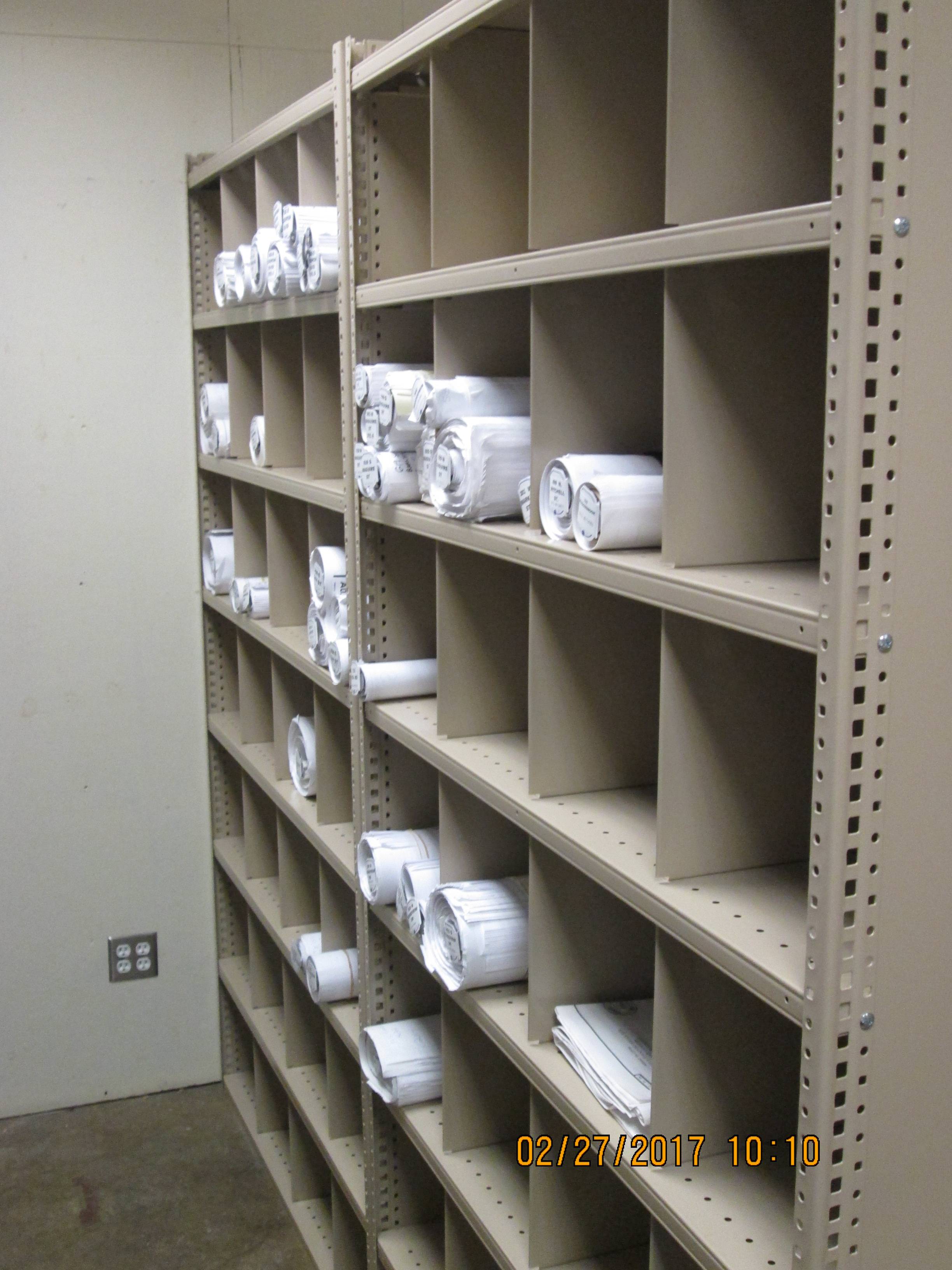 A section of the archive for storing construction documents.

The City only holds house blueprints for 8 years after CO (three years longer than the state requires) per our legal counselor. For commercial, we hold all construction documents for the lifetime of the structure though the State only requires the City to hold the documents for ten years after the CO. Missouri document retention policy (GS099). Therefore we have commercial documents that date to the start the twentieth century, though admittedly, lack procedure in the past as resulted in holes in our archive.

We have the archive of data and it is public record. Anyone could ask to see the blueprint of any structure within the city. Though we make record of the person asking and do not let them take the record form the archive room.

Our police department asks for building documents several times of year when they are planning a response or practicing. They also look at photos from code enforcement, as we may have physically been in a structure and can provide more detail. I also spent about a month creating building footprints from high-res orthophotography that PD was interested in using for response planning. Additionally, using GIS it is possible to link a footprint feature to the construction document for easy retrieval (though as the City, we are not quite there yet).

An example: A couple weeks ago there was drug bust in a structure that I had visited about nine month prior for building violations. The SERT team has the ability to request documents from my department to plan their actions against the occupants. Because the structure in question was built in the 1920s there was not a blueprint but only the recent visit by me for structural violations with photographs some of the internal layout.

Even if local code requires the availability of building plans it might still lack the interior design plan.

So it is critical to have the latest plans if you are planning to storm a building but like @Brian Knoblauch wrote- good luck finding those.

translated by google to

Not the answer you're looking for? Browse other questions tagged law-enforcement .

7
Are Police and Army training made tough to ensure that the personnel learn to follow orders?
16
Police tip lines, are they huge source of false reports?
7
Do U.S. police (sheriff) departments earn money with drug busts?
4
Is this an excerpt of a police report by Floyd Mayweather's son?
25
Do Japanese police roll drunks and criminals into giant futons?
41
Do the Swedish police have a special code for immigrant crimes?
9
Did a refugee evade arrest by three female police officers in Sweden, as shown in this video?
18
Are Swedish police banned from describing criminals?
41
Did French police fine homeless persons for not being confined at home?