Has the UN low variant for population growth been the historically correct figure?

In our research, we’ve looked at the UN’s predictions and how they have compared with real life--and in every case the “low variant” has been the most accurate.

I took a look at the stats on the UN's site and they show the actual population for historical figures, not their old projections.

So it seems to be no use to verify whether the low variant is historically the figure which lines up more accurately with population growth.

Short answer: No the accuracy of past forecasts is mixed with no clear variant being usually better

The most recent detailed analysis of how good the various projections have been was published in 2000: Beyond Six Billion: Forecasting the world's Population .

This table summarises the accuracy of past forecasts for population in the year 2000: 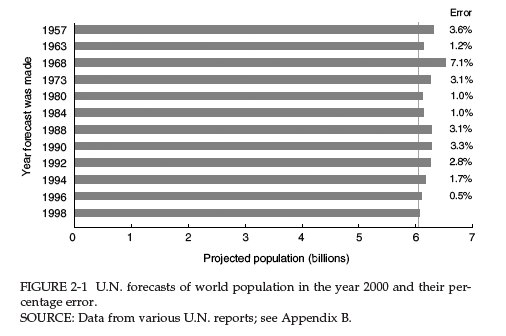 These errors are mostly quite modest, given that even the starting population for each projection was not known with exactitude.

Despite this apparent accuracy, the fact that all these past projections of the 2000 world population are too high is somewhat surprising. A major reason is that fertility in several countries has declined more rapidly than expected, and more rapidly than previous trends suggested, over the past decade

The table and comments refer to the UN mid forecasts so don't completely answer the question.

The older UN forecasts are not readily available online, but the British Library keeps hard copies (see here). The numbers I report below are from a selection of those books. 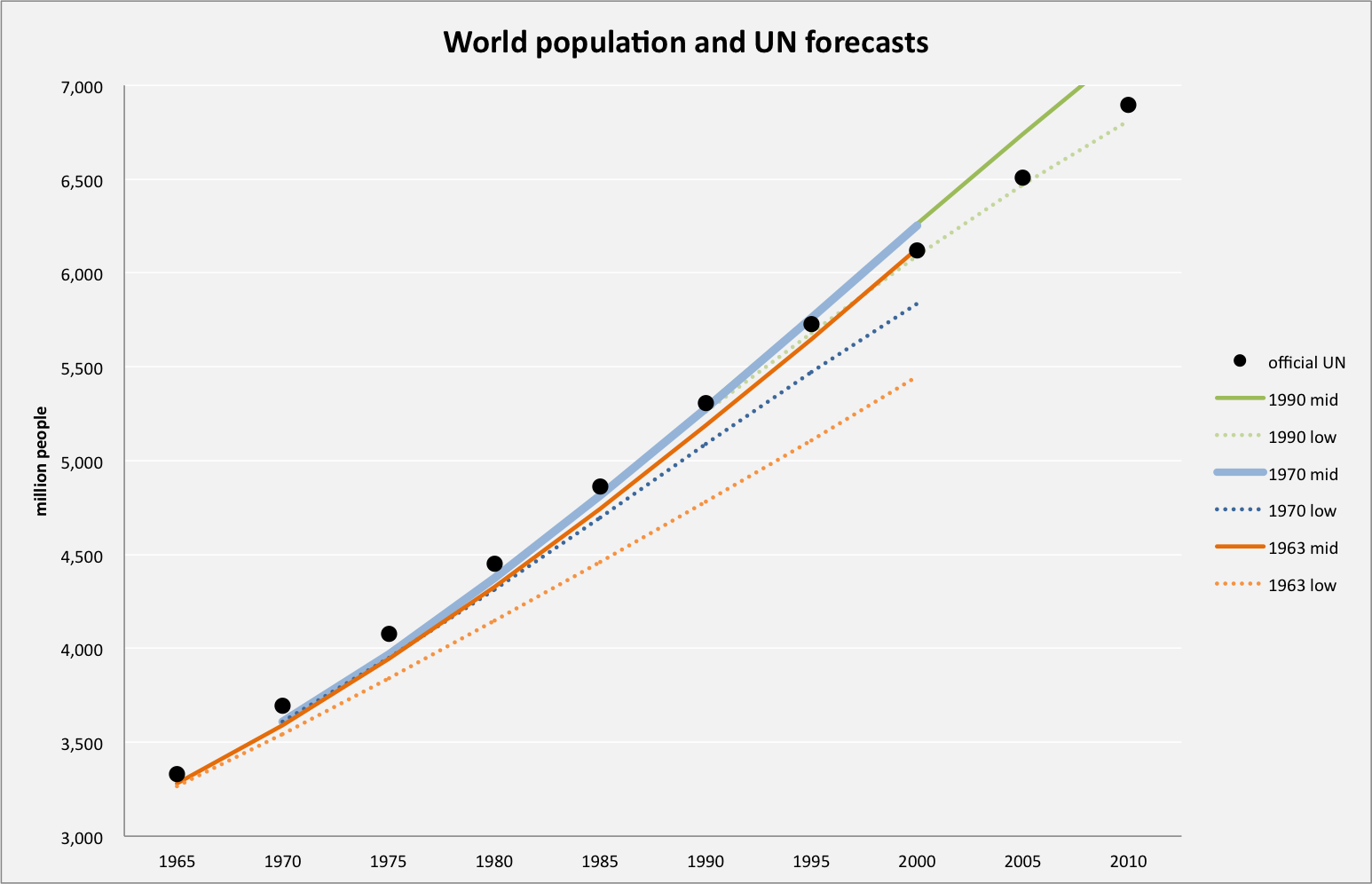 It can be seen that many of the mid estimates actually underestimate the population until relatively recently where the overestimates get bigger (though the errors are not large and the forecasts overlap on the chart). Here is a table of the underlying data:

The closest estimates to each actual are highlighted in red. It is only recently that the low forecasts seem to be the more accurate ones an mid forecasts seem to slightly overstate the actual population as the 2000 review suggested.

It is worth bearing in mind that population forecasting, despite being on of the most reliable sorts of forecast, doesn't have a good track record at the hard stuff. It is easy to project the number of 40 year-olds 20 years in the future (hint: count today's 20-year olds). The key things that are hard to predict are death rates (though they are a lot easier than they used to be) and birth rates (which have varied unpredictably for some time). A quick search of the archives of The Economist shows speculation about UK population collapse in the 1930s, population boom in the 1960s (with scary total population in the 70 millions), flat population in the 1980s and, most recently scary populations in the >70m area again (though driven as much by migration as birthrate).

Here's a table on the error in the UN's population rate forecasting from 1950-1970, from a paper published in 1981 - The Limits of Population Forecasting

What the author of the paper is doing is comparing the UN population projections for 1100 different regions to their actual population increases starting from the "jumping-off year". This table represents the root-mean-square of the error in population increase in percent, for example, if the US was predicted to grow by 50% in one year and actually grew by 54%, that would be an error of 4% or 0.04 in this table. 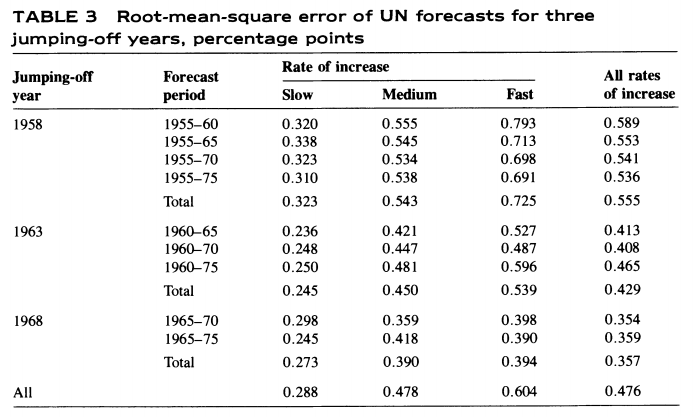 Not the answer you're looking for? Browse other questions tagged united-nations population .

28
Is overpopulation a myth?

22
Has Israel used banned weapons against the population of Palestine?