Is Mecca at a special place on the earth's surface, dictated by the Golden Mean?

Mecca considered by Muslims to be the holiest city of Islam.

This video about the Mecca makes the following claims:

Given the following definitions:

I will make the following statements:

Therefore, the only interesting concept in the entire video is the very first one, that the ratio of the distance from the South Pole to Mecca has a golden ratio proportion to the North Pole from Mecca (which itself is in significant error). Every other point is arbitrary or a simple mathematical deriviation. That there should be a relationship between an arbitrary number and the significance of a geographical place is a total non-sequitur (and also not unique to Mecca).

1 http://mathworld.wolfram.com/GoldenRatio.html: Euclid ca. 300 BC gave an equivalent definition of by defining it in terms of the so-called "extreme and mean ratios" on a line segment, i.e., such that Φ = AC/CB = AB/AC

3 http://en.wikipedia.org/wiki/Solstice: A solstice is an astronomical event that happens twice each year when the Sun's apparent position in the sky, as viewed from Earth, reaches its northernmost or southernmost extremes.

4 http://wwp.millennium-dome.com/info/conference.htm: Why does the Prime Meridian (Zero Longitude) pass through Greenwich? It dates back to October 1884. At the behest of the President of the United States of America 41 delegates from 25 nations met in Washington, DC, USA for the International Meridian Conference...

5 http://mathworld.wolfram.com/Triangle.html: If a line is drawn parallel to one side of a triangle so that it intersects the other two sides, it divides them proportionally, i.e., AX/XC = BY/YC

- I used this formula to integrate the area of the band from 21.071° to 21.423° on a sphere to estimate the size of the region of tolerance that would satisfy the requirements presented in the video for Mecca.

A user on YouTube, called TheRationalizer has examined the claim that Kaaba, in Mecca, lies upon (one of) the Golden Ratio points between the North and South pole, and between Greenwich Meridian.

His three minute YouTube video reproduces the calculations, using the freely available tools of Google Earth and Wolfram Alpha. He shows each of his calculations on-screen, with justifications.

So, even if you accept:

there is still a large error in the claim.

This is not a peer-reviewed source. I can see no errors in his approach.

also the proportion of eastern and western elongation, are equal to the Golden Mean.

First of all, Al-Masjid al-Ḥarām (The Grand Mosque) was established in Mecca in 638. That's thousand years before Greenwich observatory was established.

Secondly initial meridian is completely arbitrary. Historically there have been dozens of them. Greenwich has been established as initial meridian only in 1851 and internationally accepted in 1884. And that still wasn't universal adoption.

It's sounds ridiculous to affirm that location of The Grand Mosque is based on coordinate system that didn't exist until 1250 years later.

From OpenStreetMap I derived the Kabbah to be at 21.423° north. Here is an schematic image, how the formula is derived: 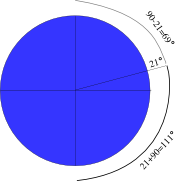 If you pan with the mouse over the map of OpenStreetMap, you can read the position in the lower right corner.

Not the answer you're looking for? Browse other questions tagged geography islam mathematics .

0
Is kabbah the center of the earth

41
Is there a place in the world where two oceans meet and they don't mix?
8
Do Qur'an verse counts correspond to the moon landing date and take-off time from the surface of moon?
4
Was Aryabhatta the first to invent place value system and zero?