Is the U.S. 90th in the world in terms of women in national legislatures?

The Miss Representation Extended Trailer makes the claim, at 6:03:

The U.S. is the 90th in the world in terms of women in national legislatures.

If people knew that Cuba, China, Iraq and Afghanistan have more women in government than the United States of America, that would get some people upset. -- Gavin Newsom, Lt. Gov, California

The on-screen stat and the voice over at minimum don't seem to really correlate to each other, as "in-government" could potentially mean anything including the cleaning staff at a government-owned gas station.

Is this claim that the U.S. is ranked 90th in the world in terms of women in national legislatures true? And if so, what does it actually mean--what metric is it measuring?

TL;DR: The claim is true within reasonable rounding margin.

According to the Inter-Parliamentary Union, the US House of Representatives has the 69th-most women among all lower houses. In terms of ranking among nations, the US is ranked 89th in terms of female members of (lower) houses out of 188 countries. The US is also ranked behind Cuba (5th), China (51th), Iraq (35th) and Afghanistan (30th). Thus, the claim appears to be true.

Shouldn't we compare members in both houses, rather than just compare lower houses?

Well, if both houses were counted together, where applicable, the US would actually lose 8 ranks: Barbados, Antigua and Barbuda, St. Lucia, Bahamas, Grenada, Swaziland, Ireland, and Zimbabwe all would get more than 17% representation.

Shouldn't we compare the US to something more relevant than, say, Bhutan, or to places were parliaments have any relevance, unlike e.g. Belarus?

As an aside, this report compiled for the parliament of Canada mentions how election procedures can help or hurt women (and other underrepresented groups):

Canada’s electoral system is a “single-member plurality” or “first-past-the-post” system. In every federal electoral district, the candidate with the most votes wins a seat in the House of Commons and represents that riding as its Member of Parliament. It has been argued that this system tends to discourage the election of women and other under-represented groups.

Here's the distribution of everybody, and the EU: 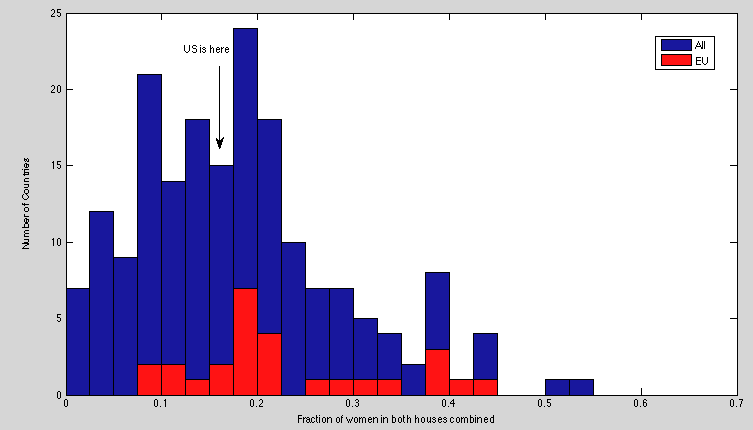 If we split the EU into three groups (low, medium, high percentage of women in legislatures), then they're topping the bottom half of the low group. Really, in whichever way you turn this, the US looks bad - unless the US strives to be totally average (i.e on the level of Venezuela and Turkmenistan; also, I mean median here) in terms of representation of women in legislatures.

Not the answer you're looking for? Browse other questions tagged united-states sexism .

41
Are there more women in government in Afghanistan than America?

44
Does the U.S. President have a red phone?
31
Did a group of U.S. women propose to send black kids instead of dogs to space?
29
Have more U.S. senators been arrested for sexual misconduct in bathrooms than trans women?
23
Did Ed Trice force the rescoring of a national standardized math test?
11
Did US forces use tens of thousands of Japanese women as sex slaves after the WWII?
7
Did the U.S. government try to rename hamburgers to "liberty sandwiches"?
4
Were additional fencing and magnetometers used on the National Mall for Trump's inauguration?
9
Does the US National Security Council have the ability to authorize assassination as described in this post?
19
Did the U.S. refuse coronavirus testing kits offered by the World Health Organisation?