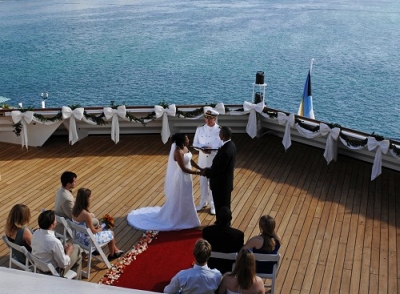 "Since the days of the first wooden vessels, all ship masters have had one happy privilege: that of uniting two people in the bonds of matrimony."
— Captain James T. Kirk (*)

Due to numerous examples on TV and and in movies I have never doubted the veracity of this, but:

Captains can perform marriages, but they need a license to do so, just like anyone else would.
There are no laws that "automatically" grant captains this right.

StraightDope has this one dissected pretty thoroughly.

TL;DR: No, there's nothing special about ship's captain job that lets them officiate a marriage, at least in the US Law.

In other words, a ship's Captain can officiate a marriage only in the same circumstances that anyone else on the ship can - e.g. the couple would either have to be under jurisdiction of a state that recognizes common-law marriage, or the person doing the marrying (captain or not) has to be a clergy member or JD or other qualification recognized by the state.

"The commanding officer shall not perform a marriage ceremony on board his ship or aircraft. He shall not permit a marriage ceremony to be performed on board when the ship or aircraft is outside the territory of the United States, except: (a) In accordance with local laws … and (b) In the presence of a diplomatic or consular official of the United States."

Similarly, the official logbook supplied to ships' captains by the British Mercantile Marine Office warns that shipboard marriages performed by the captain are not legal. If the ship is registered in New York state, the captain can be fined or imprisoned.

They also further discuss Fisher vs. Fisher. court decision and why it doesn't mean that this myth is true.

Please note that what may cause the confusion are 2 facts:

Not the answer you're looking for? Browse other questions tagged marriage .

22
Do married people live longer than single people?
46
Is it prohibited to marry more than one woman in US?
3
Is Ellen DeGeneres legally married because of Obama?