Do sharks quickly respond to blood in the water?

This seems to be portrayed in movies and TV quite often: we find a group of travelers desperately stranded on a small boat or raft. For one reason or another someone becomes injured and blood is spilled into the seawater. Without fail (sometimes even minutes later) we find our hapless individuals surrounded by one or more hungry sharks.

Question -- Is a shark's ability to "smell" blood, or their numbers and vicinity, exaggerated here (and as such just a convenient plot device)? Or should I really expect at least one shark to arrive nearly every time, if ever in that situation myself? 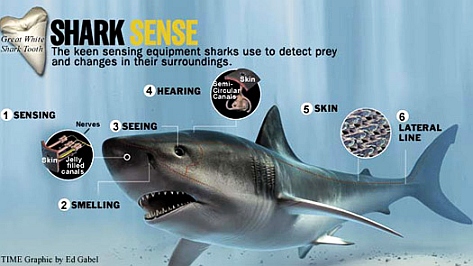 To detect blood the smell first has to reach the shark.

From The Naked Scientist:

Water molecules in general are carried to the shark by water currents.
If there are no water currents then it is molecular diffusion, the random movement of molecules that disperses the odour away from the source.

In general the travel time of odour depends entirely on the local water velocity.

From the ReefQuest Center for Shark Research:

A shark's lateral line system enables it to detect subtle water movements. Therefore, when a shark's acute olfactory system detects an attractive chemical, all it needs to do is turn into the current. Sooner or later, this will bring a shark to the source of the odor.

The notion that the mighty great white can smell blood from a great distance has been central to modern shark mythology.

They can detect some scents at concentrations as low as 1 part per 25 million, which translates to about a third of a mile away in the open ocean.

From an Interview with shark expert Samuel Gruber:

It comes down to the concentration of the stimulating chemical at the nose's receptor cell that determines if an animal will detect a smell. That level is parts per million in sharks.

From the American Museum of Natural History:

The lemon shark can detect tuna oil at one part per 25 million--that's equivalent to about 10 drops in an average-sized home swimming pool.

Other types of sharks can detect their prey at one part per 10 billion; that's one drop in an Olympic-sized swimming pool!

Some sharks can detect these low concentrations of chemicals at prodigious distances--up to several hundred meters (the length of several football fields)—depending on a number of factors, particularly the speed and direction of the water current.

From Sharks of the Atlantic Research and Conservation Coalition (ShARCC):

Some species are able to detect as little as one part per million of blood in seawater.

... however, it is suggested that sharks are not stimulated by mammal blood (e.g. from humans) in the same way as they are by fish blood.

Is it exaggerated? Sure.

Does it happen? Yes.

It is recognized that most if not all species of sharks possess a keen sense of smell which is used in detecting dead and wounded prey or other edible material during their well-known scavenging operations. [...] This tracking ability is well recognized by skin divers and fishermen who have involuntarily attracted sharks by retaining speared fish or by discarding trash fish and offal from their boats.

There's been plenty of research on shark olfaction.

There is a technique used in shark-fishing of dragging a "burley bag" or "burley bucket" of bait behind the boat to attract sharks. (I found lots of mentions on the web, but nothing particularly citable.)

Not the answer you're looking for? Browse other questions tagged biology safety sharks .