Are slick bicycle tires more slippery in the wet?

I always assumed slick (tread-less) tires were more prone to loss of traction in the wet. That is until I read this answer on the bicycles SE which claims that bicycle tires are too thin, round and firm to experience hydroplaning. Is there any research to back these claims?

Jobst Brandt, author of "The Bicycle Wheel" (which explains how to build strong bike wheels and which includes a finite-element analysis of spoked wheels) lays out the argument at Sheldon Brown's site:

Commercial aircraft, and especially motorcycles, demonstrate that a round cross section tire, like the bicycle tire, has an ideal shape to prevent hydroplaning. The contact patch, a pointed canoe shape, displaces water exceptionally well.

A window-cleaning squeegee demonstrates this effect well. Even with a new sharp edge, it glides effortlessly over wet glass leaving a microscopic layer of water behind to evaporate. On a second swipe, the squeegee sticks to the dry glass. This example should make apparent that the lubricating water layer cannot be removed by tire tread, and that only the micro-grit of the road surface can penetrate this layer to give traction. For this reason, metal plates, paint stripes, and railway tracks are incorrigibly slippery.

Besides having better wet and dry traction, smooth tread also has lower rolling resistance, because its rubber does not deform into tread voids. Rubber being essentially incompressible, deforms like a water filled balloon, changing shape, but not volume. For a tire with tread voids, its rubber bulges under load and rebounds with less force than the deforming force. This internal damping causes the energy losses of rolling resistance. In contrast the smooth tread transmits the load to the loss-free pneumatic compliance of the tire.

In curves, tread features squirm to allow walking and ultimately, early breakout. This is best demonstrated on knobby MTB tires, some of which track so poorly that they are difficult to ride no-hands.

I've ridden both but mostly slicks. I haven't had significant trouble with either on wet tarmac, though I really notice a difference between 25mm and 28mm wide tires on wet mountain descents. The wider tire (and hence larger contact patch) gives much more traction on turns and seems to have a much greater effect than the tire surface pattern.

That said, I doubt many cyclists get fast enough to hydroplane on wet roads. I've done above 45 mph (75 kph) downhill on dry tarmac in good visibility which is more than fast enough to hydroplane a rectangular cross-section tire, but I would never do that in the rain because water hides potholes. Even if that weren't a problem and I had visibility around turns, in the rain you have to pump brakes to keep your rims (which the brake pads grip on almost all road bikes) clear of water which has the side effect of limiting speed.

I copied my answer to the Bikes.SE question.

Just to add on to what Wilka said about hydroplaning, people involved with the physics of planes landing are particularly interested in hydroplaning. Sheldon Brown of course talks about this.

Even with automobiles, actual hydroplaning is very rare. It is a much more real problem for aircraft landing on wet runways. The aviation industry has studied this problem very carefully, and has come up with a general guideline as to when hydroplaning is a risk. The formula used in the aviation industry is: Speed (in knots) = 9 X the square root of the tire pressure (in psi.)

I've found a chart here which on page 9 includes this plot: 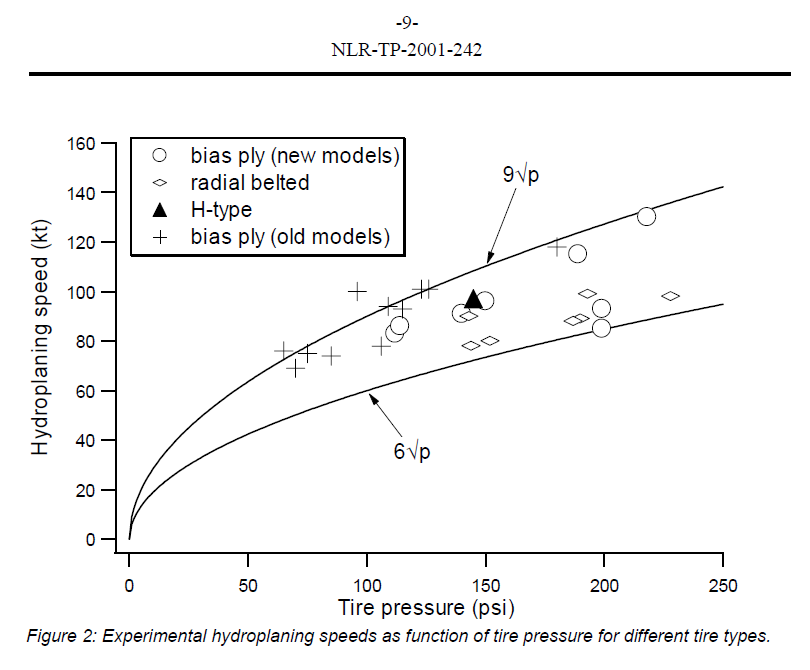 You can see that at the pressures we operate at ones risk of hydroplaning is negligible.

Regarding your concerns about flipping, Sheldon Brown has a very informative page, "Won't I Go Over The Bars?", which details why you should not be concerned with flipping over the handlebars if you are using your front brake appropriately, and shows that when traction is not an issue using just your front brake is the fastest way you can stop. He also speaks about braking in the conditions your asking about (traction impaired).

As long as I am not braking on a manhole cover I have never had issues stopping in the rain on 23C slick tires using just my front brake.

Cyclists will warn you that although you won't actually hydroplane, nevertheless you have less traction on wet surfaces: and that some surfaces (painted lines, and metal man-hole covers and streetcar rails) are especially slippery.

The Pro4 Grip has a few features designed to keep you rolling in the wet. Sipes are cut into the tread, not to clear water as many might think, but to increase pressure and therefore grip by reducing the contact patch of the tire. Margadonna gave the analogy of a football player with a size 14 shoe and a little girl with a high heel; "the girl's heel is putting more pressure on the ground because the contact patch is much smaller," Margadonna said.

Of course a soft rubber would squish and negate some of that benefit, so a higher-durometer rubber is used.

Grip in the wet, Michelin claims, is 15 percent better than the regular Pro4.

Using that study, of aircraft tires, to conclude that it is impossible or even unlikely for a bicycle to hydroplane is dubious, at best. There are significant differences between the two situations that are not being accounted for, or even mentioned. You cannot simply take an unrelated study and assume that it applies to another case.

Among other things, the macrotexture constant is going to be far different for a tire with a tiny contact patch, versus a comparatively huge aircraft tire. A pavement inconsistency that is irrelevant to an airplane might occupy the entire contact patch of a bike tire.

Also, for the record, the predicted hydroplanning speeds in that study differed substantially from their experimental results for modern tires. In other words, the model didn't even work for different aircraft tires... and you are trying to apply it to a completely different scenario.

If you believe that it is impossible for a given tire ( on any vehicle ) to hydroplane, then can you explain how and why that tire will slide on a wet surface at a lower speed than it will on a dry surface? Or, if you don't believe even that is true, explain why wet lap times are slower than dry times in all forms of wheeled sport.

Rubber tires grip pavement by deforming into the microscopic imperfections in the surface... whether or not the tire features a tread pattern. That effect is reduced in wet conditions because the "wet" fills in those imperfections. In other words, the tire partially hydroplanes, one little square millimeter at a time. That is why you can't go as fast in the wet, as in the dry, without losing traction... and losing traction due to a wet surface is hydroplaning. If you have an alternate explanation, please share it.

Finally, I can't believe you are still spreading the nonsense about weight/pressure equaling contact patch. If tires were balloons, that would be true, but they are not, they have structure. That equation has been experimentally disproved ( by Avon Tires, among others... http://www.performancesimulations.com/fact-or-fiction-tires-1.htm ). Note the difference between what happens when you inflate a structure-less tire tube, and a structured tire.

79
Does wearing a bicycle helmet make the cyclist safer?
14
Are ion heaters significantly more efficient then normal electric heaters?
15
Are ceramic heaters more efficient than convection heaters?
13
Are you more likely to suffer a head injury walking than cycling?
43
Does a human on a bicycle travel more efficiently than any other species?
23
Are roads more dangerous when it first rains?