Is skin cancer the leading cause of cancer death of young adult women?

"If everyone knew the true dangers of tanning beds, they'd be shocked. Skin cancer is a rising epidemic and the leading cause of cancer death for women between 25 and 29."

Edit: I read it wrong... It is just Cancer deaths. I still have difficulty believing that skin cancer is greater danger than leukemia, breast, or colon cancer.

The CDC provides data files containing cancer statistics for the US that you can break down a number of ways. I downloaded the 1999-2007 file, took the BYAGE.txt file within it, replaced the tildes with zeroes (which is what they represent), and imported it into Excel (note, if you import into Excel 2003 or lower, you will hit the limit for maximum number of rows, so you'll need to remove some of the rows which are irrelevant for our purposes here).

Putting it into a data table, I applied the following filters:

And sorted by rate. You can download my spreadsheet. Having done so, I find that "Melanomas of the Skin" is well down the list. It varies year-by-year, but 9th is most common and the highest it gets it 7th in 2005 and 2007.

Now, the results could be different if you're just looking at California, but xiaohouzi79's data suggest otherwise. Another factor is that there are a couple of other types of skin cancer - such as basal cell carcinomas and squamous cell cancer - but those are much less fatal than melanomas. Basically, it looks as though Lieu's statement was incorrect.

This site allows you to explore some statistics (statistics provided are US specific) about different kinds of cancer. If we think about overall cancer death rates for a moment we find the following death rates (all are US deaths per 100,000 people per year, and I'm just quoting women, since that what was asked about).

So skin looks like its a long way down he list. But now let's look at age, and finding the percentage of deaths at age 20-34 (that's the category the figures give us).

So it looks as if the stats don't back this up. However there's a few things. First the site I used didn't break deaths down by age and sex. If the deaths by age figures are biased towards women in the 20-34 age range, that might make a difference. Second, the age categories don't correspond exactly with the ones the original quote uses. Third, this is US wide and the figures for California might be very different (easy to imagine there being more skin cancer in California than Minnesota). Fourth we are dealing with very small numbers. There might well be a perfectly sound study that gives the result that Mr Lieu stated.

According to the US Centers for Disease Control and Prevention page on US Cancer Statistics: An interactive atlas

The rate of skin cancer deaths for CA is 1.5 and the US national rate is 1.7: 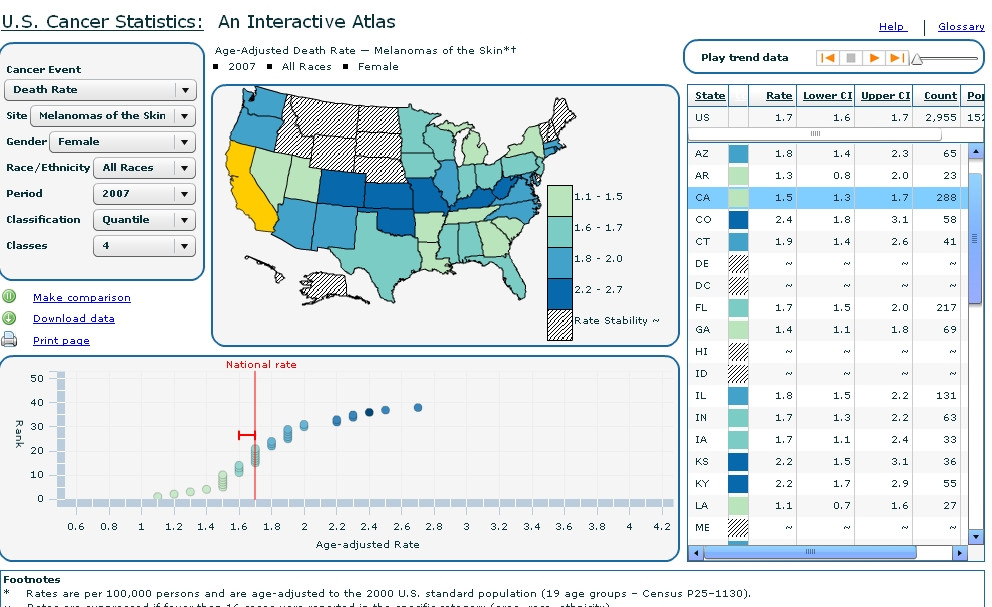 This doesn't even rate compared to other cancers: 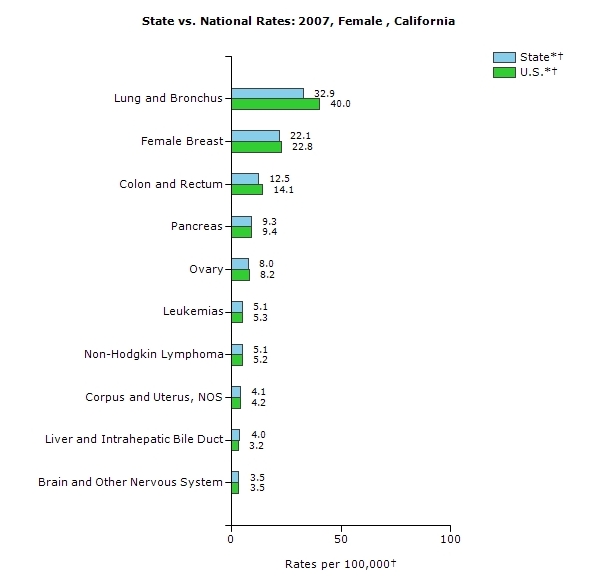 What also worth noting and can be accessed from information in the same link; for the same period the rate of incidence (incidence per 100,000 skin cancer in CA) for men is much larger than women:

Not the answer you're looking for? Browse other questions tagged medical-science cancer .

16
Is routine screening for breast cancer for asymptomatic women worthwhile?
19
Does smoking cigarettes cause lung cancer?
10
Does heat from a laptop cause cancer?
13
Do fingerprint scanners cause skin cancer?
5
Does the HPV cause cervical cancer?
3
Is the cause of stomach cancer known?
15
Is medical error the third leading cause of death in the US?
2
Can wood dust cause cancer?