Is this photo of Occupy Wall Street authentic? 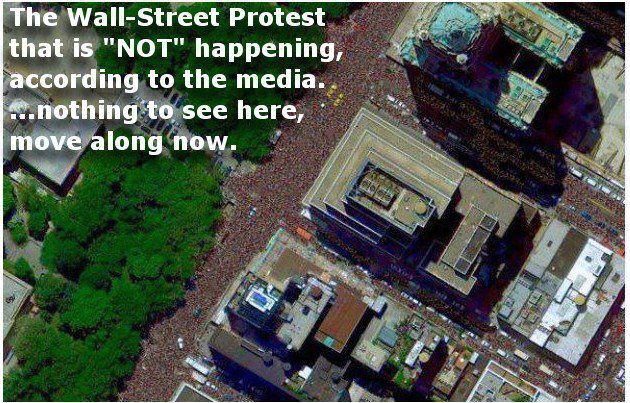 This photo is actually getting pulled off Facebook...so, the photographer added a lil text and renamed the file. Pass it on. I'm SURE the media doesn't want this one out there. Share it as much as you can.

Leaving aside the claim that the image is being pulled from Facebook, or that "the media" denies the protest is happening, is this an accurate photograph of the Occupy Wall Street protest?

It doesn't ring true to me: It seems far more populated than other photos of the event would suggest, and I would have thought more flags and placards would be visible, but I don't know.

This blog post that did some investigation on that photograph quite clearly shows that it is a photoshop job. Furthermore, the originator of the photoshop job has as much admitted to it being photoshop, and he did it to bring attention to the movement, even though he is not involved in it.

“yes its photoshopped I was hyping the event lol you do know the news is lying to us all day long. So they have CNN and Fox the 99% have me lol

If you peruse the two blog posts (I know, not the most reliable sources), they do a lot of research for us. They link to the original photographs from google and highlight how the photoshop was done.

70
Did smiling, female Israeli soldiers pose with "We kill Children" placards during Gaza War?
14
Does this photo show large crowds of protestors in Mexico?

14
Is a photo of Rick Perry's college transcript authentic?
32
Stock Market Crash of 1929: Did Wall Street investors jump off buildings?
14
Does this photo show large crowds of protestors in Mexico?
76
Does the Wall Street Journal change headlines based on location?
1
Does this photo depict the Sabra and Shatila massacre?
4
Is this a photo of Trump's inauguration crowd?
71
Is this photo of Jeremy Corbyn and caption accurate?
23
Have Democrats attacked Trump's proposed wall as "medieval"?
9
Is this letter from Madame de Sévigné authentic?
51
Is this colour footage of Breslau in 1939 authentic?