Do Americans spend 49 billion dollars a year on pets?

I heard that people in Germany spend billions on pets and didn't believe it. But actually Germans spend around 3.3 billion Euro a year. The source seems serious.

The only hint I found for US is this site, speaking of a whopping 49 billion US dollars.

This looks exorbitantly high to me when comparing the US population to Germany's, and when considering that Germany is a very pet friendly country. Can someone show a serious source listing e.g. ratio of absolute number and type of animals in US (vs. Germany)? I would really like to know how one can explain this high difference between the two countries and in which fields it arises. Do animals used in US farming contribute to the 49 billion?

on comments: Im not trying to moralize. This anyway depends on your subjective valueing of 4$/day. I was more suprised by the absolute amount (the german overall government budget is around 300 billion a year!) and the relative difference to Germany compared with population ratio (311:80) Most of pet food is very cheap meat waste from production of human food. So (to me) already the 3.3 billion Euro (1% of german government budget) is pretty much. A lot of jobless people in Germany (roughly 1 of 10) would be glad to have additionally $120/month ($1440/year). I don't have to mention people in 3rd world. It would be interesting to know where this overhead of costs comes from: too expensive food (profiteering), contributing of animals in farming (I dont think they belong to pet industry) or very expensive vets. There seems also to exist very expensive dogsitting/dog disco (rofl) trends in New York. People having a dog, but paying other to care about (?) :)

YES, apparently that number is in the correct ballpark.

Accoring to the American Pet Products Association the estimated number for 2011 is $50.84 billion. 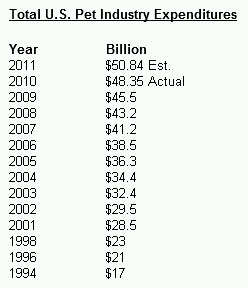 Breakdown of estimated 2011 Sales within the U.S. Market:

For more statistics click the link above.
(I don't know if farm animals are included in these numbers)

That means hotels instead of kennels, braces to fix crooked teeth, and frilly canine ball gowns.

Pet owners are becoming increasingly demanding consumers who won't put up with substandard products, unstimulating environments, or shoddy service for their animals. But the escalating volume and cost of services, especially in the realm of animal medicine, raises ethical issues about how far all this loving should go.

Not the answer you're looking for? Browse other questions tagged economics zoology .

25
Can we end poverty for $US175 billion per year?
6
Do Americans spend 9.14 billion hours on government paperwork every year?
10
Are pets as bad for environment as cars?
67
Has the Red Cross raised half a billion dollars for Haiti to build 6 houses?
16
Does the fossil fuel industry benefit from trillions of dollars of subsidy from governments every year?
50
Do 643,000 Americans go bankrupt every year due to medical bills?
9
Did China import 2 billion masks earlier this year to control Covid-19?