Do speed bumps cause more deaths than they save?

After a few speeding incidents in a residential neighborhood, some residents will clamor for speed bumps.

In case your municipality does not have one, here is a picture of a speed bump (also AE sleeping policeman, BE road hump, road bump): 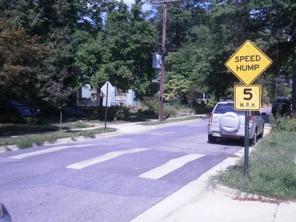 A Connecticut government site has considered damage to vehicles, and this anti-speed bump flyer cites the difficulties with emergency vehicles navigating speed bumps, replete with pull quotes from unnamed emergency personnel. It also cites "well researched reports," but alas, the link is dead.

Do the speed bump detractors have any merit? Or are they off track / up in the air / (insert appropriate pun here)?

Let me oppose science to political propaganda and flyers:

Methods. We conducted a matched case–control study over a 5-year period among children seen in a pediatric emergency department after being struck by an automobile.

Results. A multivariate conditional logistic regression analysis showed that speed humps were associated with lower odds of children being injured within their neighborhood (adjusted odds ratio [OR] = 0.47) and being struck in front of their home (adjusted OR = 0.40). Ethnicity (but not socioeconomic status) was independently associated with child pedestrian injuries and was adjusted for in the regression model.

The 20 mph zones have successfully reduced accidents by about 60 per cent and vehicle speeds by over 9 mph.

According to wikipedia there is one retracted statement by a London ambulance driver that speed bumps may affect the effectiveness of emergency services—I cannot verify that source because the link is dead—however, skeptically speaking this is a no-brainer.

Suggesting that it is better to have more injuries and the emergency services arrive faster is... not smart.

This doesn't answer the question. I offer it as partially-digested research that may be useful to others generating a full answer.

In August 1997, the Montgomery County Fire and Rescue Commission produced a report called "The Effects of Speed Humps and Traffic Circules on Responding Fire-Rescue Apparatus in Mongomery County, Maryland."

They conducted an experiment to see how much effect speed-bumps had on their response times. The results are complex:

The amount of delay was found to be dependent upon three factors - vehicle type/size, type of traffic calming device, and driver discretion regarding speed.

For some situations, the delay "is equivalent to responding from a station .05 mile per speed hump further away from the incident location along an unimpeded route." (For the civilised world, that corresponds to about 80 metres.)

So, yes, there are — as we might expect — real delays. But the real question is "how many lives are lost due to this delay?" so we can compare it with the figures in Sklivvz's answer. Neither Sklivvz nor I have found an answer to that question. Is it out there?

It is hard to prove there has been no research on a topic — especially as an amateur in the field. One way to address this is to show some experts have looked and not found any.

One report in a 2008 Road Safety seminar hosted by the UK Deportment for Transport, Behavioural Research in Road Safety 2008 Eighteenth Seminar was a prelimary study (including surveys of drivers) called "Risk and the driving of emergency vehicles" by Tomás Walsh, Barbara Hannigan and Ray Fuller.

Road humps Speed humps and other road features designed to restrain speed, such as speed tables and cushions, are recognised to cause delay, but the trade-off in reductions in road accidents is also admitted:

They do make a claim that there is no evidence to help us answer this question:

It might be noted that there does not appear to have been any analysis published which attempts to estimate the size of this possible trade-off.

Consistent with that understanding that the data has not been collected is a 2003 letter from Peter Bradley, Chief Executive of the London Ambulance Service.

The tone of the letter is generally warning of the risks of speed bumps in slowing response times:

This Service believes that it could probably save more lives if the overall traffic flow were to be improved. Just among the 5000 cardiac care victims that we try to resuscitate this could possibly save about 500 lives. In addition a minute gained in reaching other life threatening cases could potentially save hundreds of lives.

However, it also admits that there is a dearth of relevant information:

We believe there have been a number of studies relating to ‘speed humps’ but at this time the LAS is not aware of any significant UK-based report that has made any scientific study into the overall effects of speed humps, including their impact on ambulance response times; the potential consequences of delayed responses by emergency vehicles to ‘life threatening’ situations; and their effect on the comfort of patients being conveyed to hospital.

We would welcome the opportunity to be involved in any such research if it were to be commissioned.

Apparently there is less correlation than one would think between the EMS times and survival rate. Why? Because it matters only in particular cases like cardiac arrest:

Study objective
The first hour after the onset of out-of-hospital traumatic injury is referred to as the “golden hour,” yet the relationship between time and outcome remains unclear. We evaluate the association between emergency medical services (EMS) intervals and mortality among trauma patients with field-based physiologic abnormality.

Methods
This was a secondary analysis of an out-of-hospital, prospective cohort registry of adult (aged ≥15 years) trauma patients transported by 146 EMS agencies to 51 Level I and II trauma hospitals in 10 sites across North America from December 1, 2005, through March 31, 2007. Inclusion criteria were systolic blood pressure less than or equal to 90 mm Hg, respiratory rate less than 10 or greater than 29 breaths/min, Glasgow Coma Scale score less than or equal to 12, or advanced airway intervention. The outcome was inhospital mortality. We evaluated EMS intervals (activation, response, on-scene, transport, and total time) with logistic regression and 2-step instrumental variable models, adjusted for field-based confounders.

Conclusion
In this North American sample, there was no association between EMS intervals and mortality among injured patients with physiologic abnormality in the field.

18
Are Hummers more environmentally friendly than Prius?
8
Seat belts in cars save the lives of occupants in cars, but do they lead to lower deaths for all road users?
13
Will increased speed limits on motorways (or highways) cause significant harm?
35
Are old car models more reliable than new ones?
5
Do modern turbo-diesel car engines fail significantly more often than gasoline ones?
19
Does the establishment of a legal upper speed limit on highways lead to a reduction in traffic deaths and accidents?
30
Is gearing down more energy efficient than braking?
8
Would lowering the speed limit in NYC by 5mph lower the number of pedestrian deaths by a factor of 2?