Are cancer recovery rates the same as they were in 1920?

I ran across the movie Cut Poison Burn, who's abstract is as follows:

Cut Poison Burn is a controversial, eye opening, and sometimes heartbreaking documentary that puts the business of cancer treatment under the microscope. Follow the frustrating journeys of critically ill cancer patients as they try to navigate the confusing and dangerous maze of treatment and encounter formidable obstacles in the “cancer industrial complex.” A compelling critique of the influence of medical monopolies, the power of pharmaceutical companies and government agencies, Cut Poison Burn is essential viewing for anyone and everyone touched by cancer.

The movie may advocate (haven't watched the whole thing) some kind of new, pennies-per-session treatment a la Burzynski, or at least Dr. Mercola is using it to do so.

There are a myriad of claims in the movie, I'm sure (I only watched the first 10min), but I'd like to address one in particular that struck me (occurs starting at the 7min mark). It is made by Charles B. Simone, M.MS, M.D., founder of the Simone Protective Cancer Center (transcripted by me; may contain small errors):

From 1920 to the present time, we have made little or no progress in the treatment of adult cancers. So a person who gets prostate cancer or breast cancer today will live as long as a person who got it in 1920. No big change. With all the radiation therapy that began in the 10's and 20's, combination chemotherapy in the 60's, immunotherapy that began in the 70's, PET scans, MRI scans, you name it, billions and billions and billions of research dollar that we've thrown into this whole area of cancer research and treatment... little or no significant progress in the treatment of adult cancers.

Is this the case? Has no treatment since 1920 done anything to increase the chance of [long-term] survival of adults who have cancer?

Women patients with metastatic breast cancer (for example) lived much longer after diagnosis in 1995 compared to 1920.

This 1983 study describes an interesting aspect to this question:

However, over the next twenty years, improvements were more limited:

Despite the use of combination drug programs in the 1970s, the percentage of these patients remaining alive at 5 years remained near 25%. Firm conclusions cannot be made from a retrospective study spanning 60 years, although the trends depicted and lack of continued improvement indicate that our current therapeutic approach to metastatic breast cancer may not result in dramatic improvement in overall survival.

Taking over from there was another study:

It compared cause-specific survival from metastatic breast cancer for two periods: 1981-1985 and 1991-1995. It looked at the results from two areas: Connecticut and San Francisco-Oakland. It found that back in 1981-1985, both regions has similar results, but there was an improvement in survival for the San Francisco-Oakland registry patients a decade later and no improvement in Connecticut.

Beware of the confounding effects of earlier/better detection of disease.

Noted skeptic PZ Myers addressed a similar issue on his Pharyngula blog. He shows how the survival rates for childhood cancers have increased dramatically.

It doesn't directly answer the question, because it deals with childhood cancers (the original quote was about cancer in adults), and because it is poorly referenced. However, the graphs are quite dramatic, and one could expect to see similar results in adults. 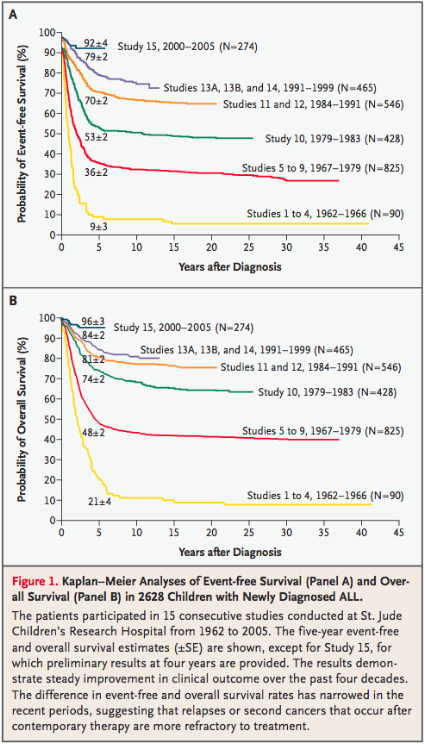 19
Have any "cures" been invented since the 1950's or so?
25
Does Burzynski have a miracle cancer cure being suppressed by the FDA?
14
Is there an epidemic of cancer?

13
Are mitochondria "natural cancer fighting cells"?
8
Are there documented cases of people that were cured from cancer without surgery,radiation and/or chemotherapy?
18
Did nuclear tests on the Marshall Islands cause increased cancer rates?
10
Is skin cancer the leading cause of cancer death of young adult women?
7
Are tattoos (particularly Japanese) carcinogenic and do they prevent sweating?
8
Are child thyroid cancer rates around Fukushima 20—50x higher?
1
Are artificial football pitches linked to cancer?