Does some apple juice contain dangerous amounts of arsenic?

Several news media (Fox News, Huffington Post and ABC News) reported about an episode of "The Dr. Oz Show" in which Dr. Oz stated that many apple juices contain dangerously high levels of arsenic. The FDA had advance knowledge of this episode and disputed this claim, arguing that the measured amounts were for total arsenic, while only inorganic arsenic is dangerous.

Is organic arsenic harmless as the FDA claims? Are the arsenic levels present in apple juice dangerous or harmless?

No, apple juice does not contain dangerous levels of arsenic.

The US Food and Drug Administration (FDA) has been monitoring both the arsenic levels in apple juice, and the claims by Dr. Oz.

They have suggested it would be "irresponsible and misleading to suggest that apple juice contains unsafe amounts of arsenic based on tests for total arsenic". This is exactly what Dr. Oz has done, despite being warned earlier in a letter from the FDA.

They explain that they have:

every confidence in the safety of apple juice.

and that there is:

no evidence of any public health risk from drinking these juices [...] FDA has been testing them for years.

The FDA resources go onto explain that organic arsenic has a far different toxicity to inorganic arsenic, and that measuring, as Dr Oz does, for total arsenic is misleading. It also explains the reasons for the difference between acceptable levels in water and apple juice: basically, water (including added to food) contributes to a far greater percentage of daily intake.

Is the FDA right about that? Well, the Agency for Toxic Substances and Disease Registry (ATSDR, part of the US's CDC) agrees that inorganic arsenic is toxic.

Inorganic arsenic has been recognized as a human poison since ancient times, and large oral doses (above 60,000 ppb in water which is 10,000 times higher than 80% of U.S. drinking water arsenic levels) can result in death. If you swallow lower levels of inorganic arsenic (ranging from about 300 to 30,000 ppb in water; 100–10,000 times higher than most U.S. drinking water levels), you may experience irritation of your stomach and intestines, with symptoms such as stomachache, nausea, vomiting, and diarrhea.

(They goes on to describe much more nastiness involved with ingestion and inhalation of inorganic arsenic.)

When it comes to organic arsenic, they are more vague:

They contrast the length of time the two types of arsenic stay in the body:

As a complement to the answer given by oddthinking:

When the Dr. Oz Show gave the FDA information suggesting that apple juice samples it had tested showed results as high as 36 parts per billion (ppb) of total arsenic, the FDA obtained its own samples of apple juice—including a sample of the same lot of apple juice purportedly containing 36 ppb—for analysis. The FDA’s test results do not support the findings of the Dr. Oz Show, and, in fact, are significantly less (2 to 6 ppb) than the levels found by the television program’s analysis. 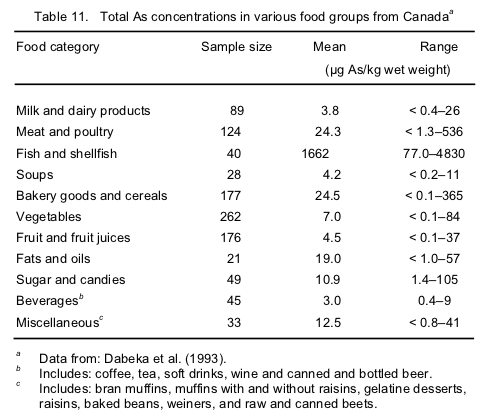 From these data it seems that the 2-6 ppb (microg/kg) in apple juice will not lead to a much higher total intake of total arsenic. You should rather start worrying about eating fish.

Not the answer you're looking for? Browse other questions tagged medical-science nutrition mehmet-oz .

33
Does an "apple a day keep the doctor away"?
13
Do apple seeds contain arsenic?
8
Does any U.S.-sold brand of "100% pure" fruit juice contain added HFCS?
18
Does bread contain traces of alcohol?
5
Does chicken meat from the US contain arsenic?
5
Does drinking juice help to remove toxins?
57
Does Condensed Milk Contain Milk?
26
Does Skippy chunky peanut butter contain trans fat?
4
Does non alcoholic beer have roughly the same alcohol as orange juice or a ripe banana contain at .5% alcohol?
4
Does carrot juice cure cancer?