Has it been mathematicaly determined that the Voynich Manuscript is not gibberish? 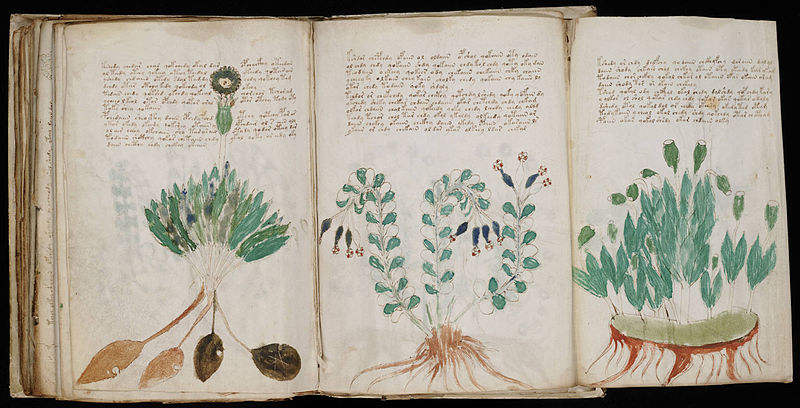 A post on the CthulhuTech forum makes the following claim about the Voynich Manuscript:

Actually doing abit of digging and the view is very spilt those who feel its a cipher of some kind have shown mathmaticly that its not gibberish. But it can be argued its possible (but would require masses of work esp. without calculaters ) to make something that would work (but there is no proof that the required knowledge existed at that point that it is belived to have been made.

What analysis was done to "prove" the manuscript is a legitimate cipher script, and how can such an analysis discern between a real cipher and carefully crafted "gibberish"?

The Voynich Manuscript is a handwritten book of about 240 pages believed to have been created in the early 15th century. It has been generally assumed to be a cipher text, but the author and purpose of the book are completely unknown. In 2009, researchers at the University of Arizona used carbon dating to confirm that the vellum pages date between 1404 and 1438. Additionally, the McCrone Research Institute in Chicago determined that the ink was "not added in a later period." This enforces the theory that the document is not an anachronistic hoax, but does not prove that the script contains a decipherable message.

A PDF presentation by Kevin Knight, Information Science Institute, University of Southern California, provides additional historical background of the document and an overview of some cryptanalysis that has been done on the document in an attempt to decipher the script. The analysis reviews patterns of individual symbols and patterns of whole words, which are inconclusive.

For more background refer to the Wikipedia entry, the Kevin Knight presentation, the WikiBooks entry, or google "Voynich Manuscript".

Rather the opposite, in 2004 a breakthrough was made in how such a manuscript could've been generated with such apparent linguistic regularity yet actually be gibberish by Dr. Gordon Rugg at Keele University:

'The manuscript exhibits so much linguistic structure that a hoax appears to require almost as much sophistication as an unbreakable code,' says Rugg in his paper.

But now the computer expert and his team believe they have found the secret of the Voynich manuscript.

They have shown that its various word, which appear regularly throughout the script, could have been created using table and grille techniques. The different syllables that make up words are written in columns, and a grille - a piece of cardboard with three squares cut out in a diagonal pattern - is slid along the columns.

The three syllables exposed form a word. The grille is pushed along to expose three new syllables, and a new word is exposed.

Rugg's conclusion is that Voynichese - the language of the Voynich manuscript - is utter gibberish, put together as random assemblies of different syllables.

In 2007 Dr. Andreas Schinner at Johannes Kepler University did further analysis, published in the journal Cryptologia, reaffirming the possibility:

In this article, I analyze the Voynich manuscript, using random walk mapping and token/syllable repetition statistics. The results significantly tighten the boundaries for possible interpretations; they suggest that the text has been generated by a stochastic process rather than by encoding or encryption of language

However, it is definitely not known to not be a hoax.

Maybe but heavily leaning towards yes, a newly published article (as of June 21, 2013) in the peer-reviewed open-access PLOS ONE journal. The article itself is actually quite in depth and includes the math that was involved with the analysis, but the follow section from the discussion is the crux of their argument,

One of the strongest clues in this puzzle is the fact that the frequency of words in the Voynich text obeys Zipf’s law. Despite that it has been shown that long random texts exhibit an approximate form of this law, the profile of frequency-rank distributions in human languages differs significantly from that of random symbolic sequences. Precise features of Zipf’s law in languages do not emerge in simple random sequences and generally require interplay between multiplicative and additive processes. Moreover, Zipf’s law was discovered centuries after the accepted date of creation of the Voynich text. Thus, proposed solutions like the use of sixteenth-century cipher methods, although not impossible, can hardly account for the presence of Zipf’s law in the Voynich text.

Since Zipf's law plays a major role in their argument, it bares noting that, as succinctly defined by the NIST, Zipf's law is,

The probability of occurrence of words or other items starts high and tapers off. Thus, a few occur very often while many others occur rarely.

Thus, a significant amount of the argument by the authors that there is likely a genuine message in the book is due to the fact that the "words" behave in this manner which would be difficult to accomplish using a stochastic process unless you were already aware of Zipf's law. Furthermore the authors also note in other parts of the article that:

Which also factor into their conclusion that there is "support to the presence of a genuine message inside the book." So it appears that more research is needed into the Voynich manuscript as there isn't definitive proof that it is an encoded document and that there is mathematical evidence to support that it is not a hoax.

Has it? Well yes and no, as explained in rjzii's answer. Regarding the last line of the question though:

What analysis was done to "prove" the manuscript is a legitimate cipher script, and how can such an analysis discern between a real cipher and carefully crafted "gibberish"?

there have been other, less well-known, statistical tests performed on the Voynich Ms. than conformance with Zipf's law; of which René Zandbergen gives a fairly comprehensive account on his site.

From René's list, let me just mention the letter serial correlation (LSC) test, which was applied to the Voynich Ms. by Mark Perakh, even before Dr. Rugg published his own paper. The test discriminates conclusively between the kind of pseudo-Voynichese that Rugg's method could produce, and the real thing (more precisely, a transcription to computer-readable form preserved by d'Imperio).

I believe LSC deserves special mention because, if I understand it right, it will land some kinds of gibberish to the same basket as meaningful text: e. g. text that accumulated scribal errors from successive copies.

So, back to the original question: mathematical analysis cannot tell if a given string of text has a meaning in some natural language; however, it can disprove that a given string was output by one of the automatic gibberish generators available in the pre-computer era. At least, those of pre-Enlightment make: it is not clear if math alone could tell genuine literature from the kind engineered under the chaperonage of 18th Cent. flying saucers.

Not the answer you're looking for? Browse other questions tagged books cryptography .