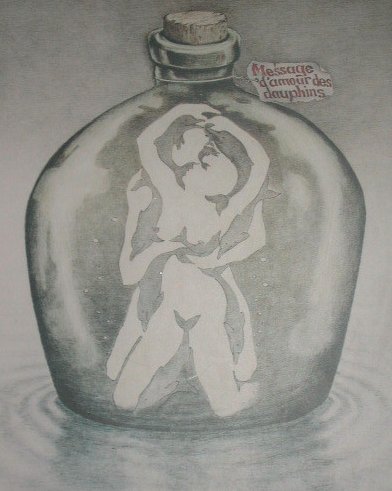 You may have seen this image on the web or in an email with the following description:

Is this a pervert test? If it's not, what's the best way to refute the claim? The beauty of this test is that trying to refute it makes you look like a pervert.

The picture is an optical illusion created by Sandro Del Prete. He is an artist specialising in this kind of endeavours. In his own words:

“Everything we see can be seen in another way. Therefore, I ask myself; isn't everything an illusion anyway? Reality is but a question of perception, and perception inevitably varies according to one’s viewpoint. Different viewpoints lead to different dimensions.”

If you look up the image on his web site, you will see that he confirms this, and that the image is certainly not a "pervert" test.

He does state that probably kids will be more likely to see dolphins and adults the sensual embrace, however he does not say this is backed up by any scientific research, so I am going to take that statement as artistic speculation and not hard fact.

This illustration incorporates a figure/ground perceptual reversal, and is an excellent example of one’s viewpoint being primed through experience. If one is young and innocent, they will most likely perceive a group of dolphins. Adults, on the other hand, will probably see a couple in a suggestive embrace.

Not the answer you're looking for? Browse other questions tagged psychology optical-illusions .