Is carbon-14 still increasing in the atmosphere?

One argument used to support the idea that the age of the earth is on the order of 10,000 years old (the 'young earth hypothesis') is that radiocarbon dating is confounded by the fact that the levels are not stable, and that the concentration of carbon-14 in the atmosphere is still increasing in our current atmosphere.

This argument is presented by Dr. Kent Hovind and his ministry of Christian Science Evangelism in two writings posted at his website, (www.drdino.com):

Present testing shows the amount of C-14 in the atmosphere has been increasing since it was first measured in the 1950s.

No sources were provided of course, thus I'm interested in knowing: Are the current levels of carbon-14 on the rise? and how can one test for this?

There are two major sources of 14C in the atmosphere:

There are also sources of CO2 that is depleted in 14C relative to the atmosphere. Atmospheric 14C can be reduced by the release of low 14C carbon, because this input dilutes the atmospheric signature. Because 14C has a half life of 5000 years, only 0.5^(age_x/5000) times the initial 14C will remain at age_x.

CO2 that is depleted in 14C comes from:

There are two major sinks of CO2 from the atmosphere, these sinks remove 14C CO2 in proportion to its atmospheric concentration:

Finally, the average time that a molecule of CO2 remains in the atmosphere is between 5 and 200 years (IPCC 2007 table 2.14), so after an anomalous change, the concentration of 14C in the atmosphere will return to equilibrium with sources and sinks over time. This can be seen in first figure below.

In the figures below, the y axis is Δ14C. Δ14C is the per-mil (parts per thousand) deviation in the 14C content of CO2 relative to the pre-weapons testing atmosphere (c. 1950).

[14Catm] has been declining since the bomb spike

14C increased sharply (first figure) from the 1940s through the early 1960's due to the peak in nuclear tests. Since the atomic weapons ban treaty, atmospheric 14C levels have been steadily declining, but the rate of this decline has been slowing as atmospheric 14C reaches equilibrium with other sources and sinks. This is primarily the result of:

A classic paper on this is Nydal and Lövseth (1983), who report records of 14C in the atmosphere - observed at a range of sites from 78N to 21S between 1960 to 1981. They demonstrate that the shape of the 14C 'bomb spike' is consistent across latitudes as well as the expected effects of atmospheric mixing between hemispheres and between the free atmosphere and the ocean surface.

Measurements at the ocean surface are relatively lower because this is where CO2 from the atmosphere is being exchanged with CO2 from the ocean, which much older and more depleted on average.

Plenty of recent studies demonstrate that the decline continues to present. For example, Levin and Kromer (2004) provide a more recent analysis demonstrating that this trend continued into the 2000s: 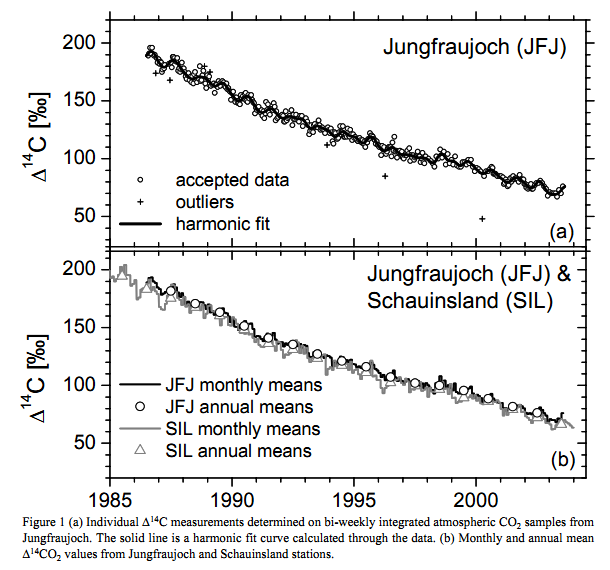 14C has been declining over longer time scales as well, as explained by Hughen et al 2004, resulting from a combination of changes in the earth's magnetic field, the release of 14C depleted CO2 from the deep ocean, and the coupling of atmospheric 14C-CO2 uptake by plants and old C release from soils that occurred during glacial retreat from 12ky ago to present.

For consistency with the above figures (keeping time from left to right), the direction of the x-axis in the figure below (years before present) is reversed. Original data available from NOAA. You can see the decline in 14C_atm that has accompanied the melting of the ice sheets (the last glacial maximum occurred approximately 20-25kya). 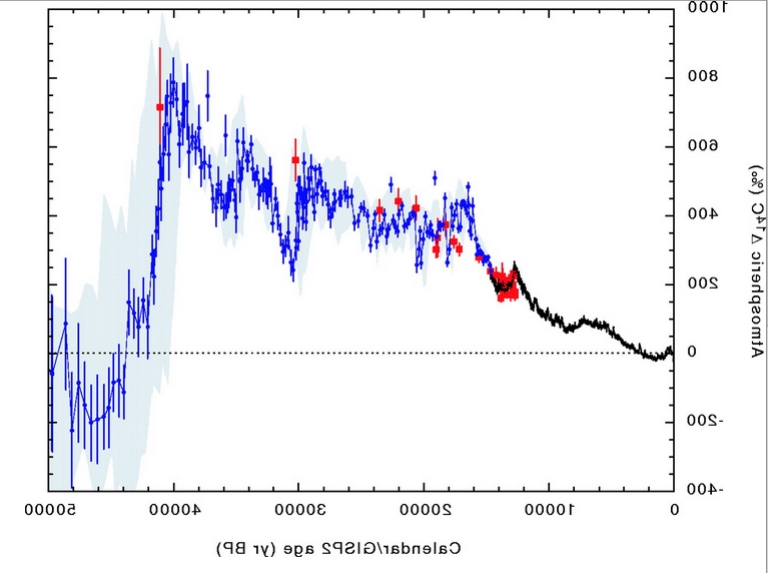 To answer the secondary question 'How do you test for this', the simple answer is 'you count the percentage of radiocarbon atoms in a sample of air. Because there is not a great record of air (the amount in ice cores is too small for radiometric analysis), researchers often use plant material that was produced in a known year, reflecting the level of radiocarbon in the atmosphere when it was fixed by the plant.

what is measured if air is not available?

Wines (Burchuladze et al 1989; Schonhofer, 1992; Palstra et al 2008) and tree rings (Suess 1955) have been commonly used as proxies for atmospheric radiocarbon content at the time the plant material was produced.

Here is a comparison of 14C in wines (solid) and atmospheric (dotted) samples from Burchuladze et al (1989): 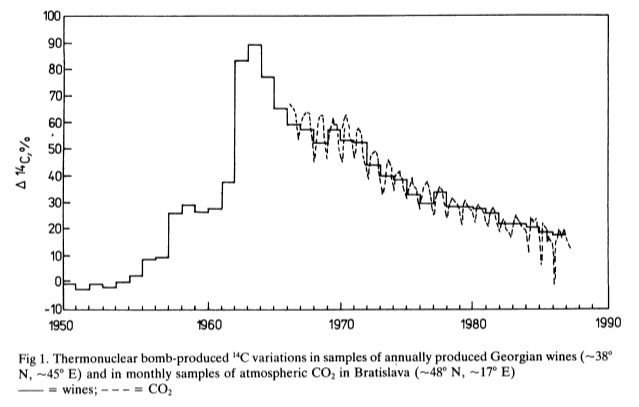 how is it measured The machine used to count the proportion of 14C is called an Accelerator Mass Spectrometer, an image from the Orange County Register is shown below: 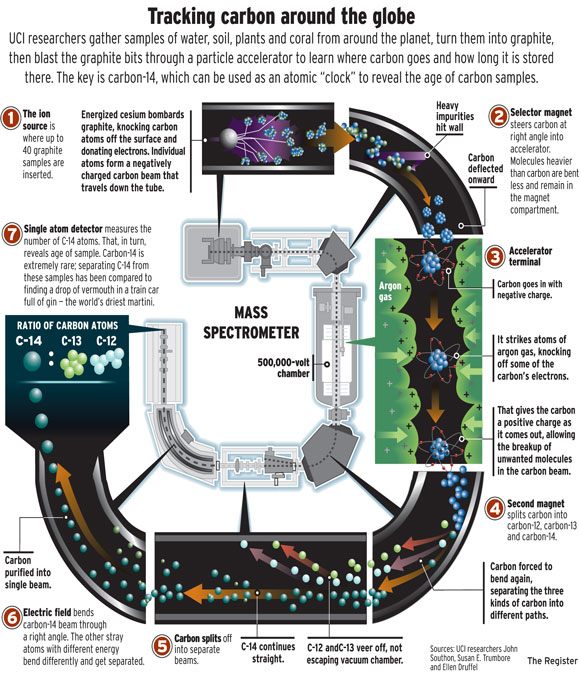 C-14 has error margins of a few thousand ans is accurate only up to 50.000 years. There are a few cases where the results are inconsistent, and these are the only experiments that are mentioned by your source or creationists generally. For example the The (2300 year old) mollusk incident is explained in full detail by Keith and Anderson (1963), and has no impact on the general reliability of carbon dating.

Even with the worst kind of error margin applied to some of the older datings, it's nowhere near the proposed 6000-10000 years, creationists talk about.

According to paleontologist Niles Eldredge (1982:103), there have been thousands of dating tests performed by independent laboratories and a wide variety of radioisotopes. Virtually all of the results correlate with evolutionary expectations. The comparatively few anomalies in radiometric dating tend to vanish when the samples are reanalyzed.

Using carbon-14 to find out the age of the world is unsuited, as the upper-age-limit is about 50.000 years. But there are other radioisotopes that allows more accurate dating for dating really old material.

Scientists used Uranium-lead dating to specify the age of the earth. Meteorids have been tested undependently and the result is an age of about 4.54 Billion years. Of course, scientists can't pin the origin of earth down to a single year, as the error margins are about 1.2%, that means ±50 Million years. That sounds like a lot but:

A few million years sounds like a huge error, but a couple of million years one way or the other is a small error compared with the huge age calculated. Saying '380 million years plus or minus two million' is like thinking back to April from December and saying you can't remember whether something happened on the 19th, 20th, or 21st. (Eldredge 1982:103)

24
Does the radioactivity on Hiroshima's soil affect radiometric dating?
9
Did the Earth have so little oxygen that dinosaurs couldn't exist?
0
Carbon 14 in Coal

36
Is alcohol for consumption tested for carbon-14 radioactivity to be considered legal?
14
Does the wind direction affect the audibility of distant sounds?
5
Does physics give a climate sensitivity to carbon dioxide of about 3°C?
31
Does the Gravitational constant fluctuate?
11
Do extreme homeopathic dilutions still retain quantities of the starting materials?
0
Has the CERN LHC Muon Detector caused mini singularities within Earths atmosphere?
4
Is the laser built in Măgurele, România, the most powerful in the world?