What is monoatomic gold?

Over the weekend I heard an acquaintance mention something called "monoatomic gold", followed by a bevy of fantastic and surprising claims about the substance, what it does, and how it was discovered.

My subsequent Google searching has returned a lot of pages with mysticism and conspiracy theories, but not much by way of solid definition. For example, my top Google hit states:

That "not to be confused with colloidal gold" rules out the one legitimate form that I figured it could be.

What is "monoatomic gold"? What is it claimed to do? Is there any scientific validity or study behind those claims?

Basically there is very little real science on this topic because the whole premise seems to be based on magical thinking.

Not only is mono-atomic gold unstudied and unproven, not only is it lacking a plausible mechanism of action, but from what I seem to be finding it might not even exist anymore,(because it looks like the product, its "discoverer" and its proponents are likely responsible for at least one death).

In an attempt to cut to the chase, I visited a number of sites touting the product and listing it as for sale, and while some of them appeared slightly disreputable, I was willing to purchase a little in the name of science. However, nearly every link I clicked yielded:

or a similar screen.

Quite by chance, the mysteries of this long-forgotten science were rediscovered quite recently. Not only did mfkzt re-emerge to find its place at the forefront of quantum physics research, but the stories of the Ark of the Covenant, the accounts of lightning, levitation and other godly attributes of the ancient texts, quite suddenly became modern scientific reality.

In 1996, the story of this initial discovery was reported in NEXUS articles by the Phoenix, Arizona, crop farmer David Hudson ]. He explained that his soil suffered from a high sodium content, which caused the surface to be hard and impenetrable by water. To combat this (back in 1976), he was injecting sulphuric acid into the ground so as to break down the crust to a manageable consistency, but, on testing soil constituents that were not dissolved by the acid, he found that one particular material had a most unusual quality. When heat-dried in the Arizona sun, it would flare into a great blaze of white light and totally disappear. Under spectroscopic analysis, however, the substance registered as "pure nothing"!

Following unsuccessful tests at Cornell University, a sample was sent to Harwell Laboratories in Oxfordshire, England, for neutron activation analysis, but even they could not obtain a suitable reading. Eventually, with assistance from the Soviet Academy of Sciences, it was determined that the mysterious, glowing white substance was composed entirely of platinum group metals in a form hitherto unknown to science.

In the course of continued research, the material was regularly heated and cooled, with a resultant fluctuation in its gravitational weight. It was also discovered that, at a certain temperature, the white bead would fall apart to become a monatomic (single atom) powder--at which point its weight fell dramatically to 56% of its starting weight. Further heating at 1160º centigrade then transformed the precious substance into a wonderfully clear glass, at which point the material weight returned to its original 100%. It was seemingly impossible, but it happened time and time again!

Totally bewildered, the scientists continued their investigations. When they repeatedly heated and cooled the sample under inert gases, they found that the cooling processes took the sample to an amazing 400% of its starting weight; but when they heated it again, they found it weighed less than nothing--way below zero. When they removed the sample from the pan, they discovered that the pan actually weighed more than it did with the material in it, and they perceived that the sample had the ability to transfer its weightlessness to its supporting host. In other words, even the pan was levitating! This was precisely in accordance with the old Alexandrian alchemical text which had discussed the golden Paradise Stone over 2,000 years before: that the material could outweigh its original quantity of gold, but, when transposed to powder, even a feather would tip the scales against it.

The substance was also determined to be a natural superconductor with a null magnetic field, repelling both north and south magnetic poles, while having the ability to levitate and store any amount of light and energy within itself

To say the least, skepticism is warranted, but much to my surprise, I did find some preprints on the topic from around 1998, however:

Electronic structure and dimerization of a single monatomic gold wire

Obviously none of that has anything to do with medicinal uses.

The whole monoatomic gold thing seems to have its genesis with that Arizona farmer, David Radius Hudson (take a look around his site for the typical pseudoscientific woo), 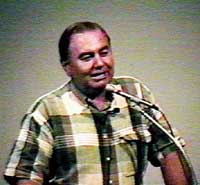 and an excerpt from one of his lectures:

"Superconductivity and Modern Alchemy" "Has the Philosopher's Stone Been Found?

And when you really find out what the white powder of gold is, you begin to really appreciate that statement. So, anyway, as I began to research this further, I found out about the history of it, I found out that it has been associated with the ancient peoples over in the Tigris-Euphrates valley. It was knowledge that was given to them by, they claimed, the gods. It is always depicted in the literature as a triangular shaped stone, but it's about twice as tall as it is wide, kind of an elongated pyramidal shape, like this. I think Zecharia Sitchin refers to it as the "athinder? stone". Ah, but all of their sacred text always began with it. Curious enough, in the ancient Egyptian text it was always referred to as the "What is it?", and if you read in the papyrus of Ani that was found in the tomb of Pepe the 2nd in old kingdom Egypt, it says, "I am purified of all imperfections, what is it, I ascend like the golden hawk of Horus, what is it, I come by the immortals without dying, what is it, I come before my father's throne, what is it, and she goes on and on, page after page, talking about all these attributes that you acquire as you ascend, but they always stop and ask the question, "What is it"? source

I am almost hesitant to include the above quote, as it could be considered an ad hominem attack on Hudson, but there is very little real science done on his findings, and I hope showing that his whole premise is based entirely on magical thinking will enlighten some.

However, this article from the Phoenix New Times puts the whole thing in perspective...(pay special attention to the first paragraph and remember that Payne was the one who administered the compound to the desperate, dying patient) 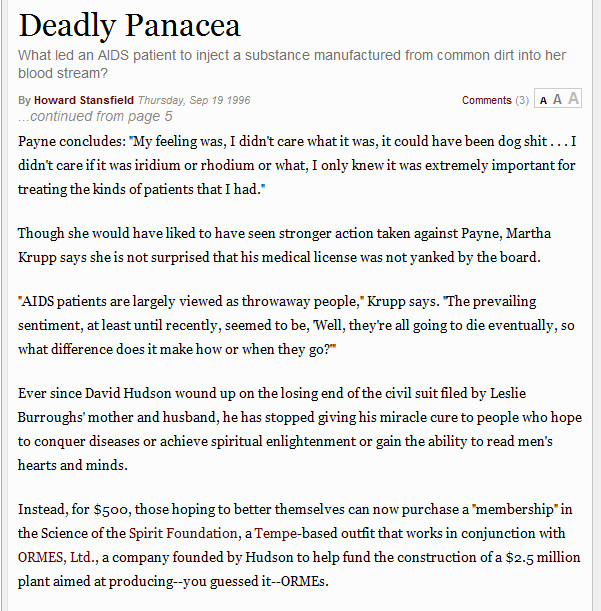 So, while I typically would go a little more in depth with an answer I have too much to do today and may edit later. But it seems that this product (and its proponents) have caused at least one verifiable death. I'll leave you with a little more from the same article...

At least one desperate person bet her life on these claims.....and lost 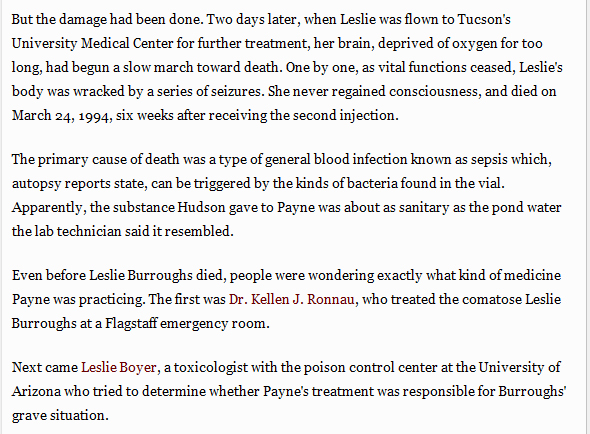 16
Are there reptilian creatures hosting the news?

31
What happens when you mix Lysol and bleach?
25
Can you melt gold in a regular campfire?
30
Is biting a gold coin a working method to verify its authenticity?
10
What do we know about red mercury?
11
Does cow urine contain gold?