I just saw this picture in Learn Something Every Day and thought of you. Some of the sites I've found reason it with gravity but doesn't explain very well. 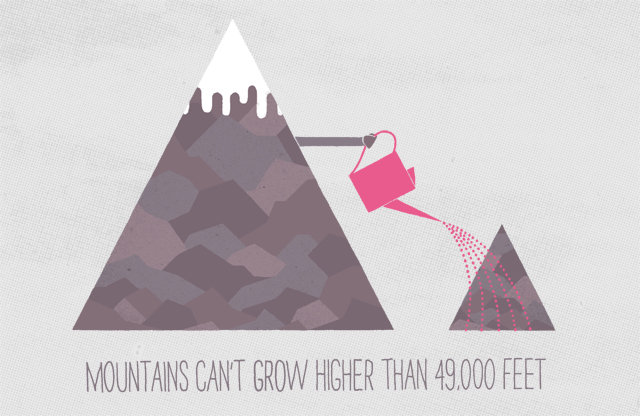 How exactly the different intrinsic and extrinsic factors interplay to shape real mountains is an active field of research. Thus, it's not possible to say exactly how high a mountain could become on earth. However, there are several limits to that.

First, there is the issue of rock stability itself. Rock has a limited compressive strength, but quite a bit of weight (relative rock density is on the order of 2.5), so if a mountain becomes too high, the rock at the base will simply crumble or melt from the pressure.

Terzagi (1962); Géotechnique, Volume 12, Issue 4, pages 251 –270 calculated the theoretical height of the tallest vertical cliff as H=strength/weight[N/m^3], which comes out to about 7.5 km for granite. Of course, a mountain is not a vertical cliff, and when you double the Granite value, you get the about 15km in the OP (full disclaimer: I'm not 100% sure how exactly adding slopes on the side gets you a factor of 2, but I'm running out of time here). Note that the above formula takes into account the weight of the rock, which means that smaller planets can have higher mountains.

In reality, these numbers are not readily achievable on earth. There are numerous intrinsic factors that limit rock stability - cracks, folds, etc., as detailed in e.g. Cruden (2003). The shapes of cold, high mountains in sedimentary rocks. Geomorphology 55:249, or in Schmidt and Montgomery (1997). Limits to relief. Science, 270:617.

Furthermore, it has been argued in Brozovitch et al. (1997). Climatic Limits on Landscape Development in the Northwestern Himalaya. Science 276:571 that it is really erosion through glaciation that ends up limiting mountain height.

The interaction between tectonism and erosion produces rugged landscapes in actively deforming regions. In the northwestern Himalaya, the form of the landscape was found to be largely independent of exhumation rates, but regional trends in mean and modal elevations, hypsometry (frequency distribution of altitude), and slope distributions were correlated with the extent of glaciation. These observations imply that in mountain belts that intersect the snowline, glacial and periglacial processes place an upper limit on altitude, relief, and the development of topography irrespective of the rate of tectonic processes operating.

This has recently been supported by Egholm et al. (2009). Glacial effects limiting mountain height. Nature 460:884, who do a more large-scale analysis. The abstract of this paper which summarizes the above much better than I do:

The height of mountain ranges reflects the balance between tectonic rock uplift, crustal strength and surface denudation. Tectonic deformation and surface denudation are interdependent, however, and feedback mechanisms—in particular, the potential link to climate—are subjects of intense debate(1, 2). Spatial variations in fluvial denudation rate caused by precipitation gradients are known to provide first-order controls on mountain range width, crustal deformation rates and rock uplift(3, 4). Moreover, limits to crustal strength(5) are thought to constrain the maximum elevation of large continental plateaus, such as those in Tibet and the central Andes. There are indications that the general height of mountain ranges is also directly influenced by the extent of glaciation through an efficient denudation mechanism known as the glacial buzzsaw(6, 7, 8, 9). Here we use a global analysis of topography and show that variations in maximum mountain height correlate closely with climate-controlled gradients in snowline altitude for many high mountain ranges across orogenic ages and tectonic styles. With the aid of a numerical model, we further demonstrate how a combination of erosional destruction of topography above the snowline by glacier-sliding and commensurate isostatic landscape uplift caused by erosional unloading can explain observations of maximum mountain height by driving elevations towards an altitude window just below the snowline. The model thereby self-consistently produces the hypsometric signature of the glacial buzzsaw, and suggests that differences in the height of mountain ranges mainly reflect variations in local climate rather than tectonic forces.

Here's the link to ref#5, which doesn't unfortunately, calculate the maximum theoretical height of a mountain. I guess geologists may mention these things in talks, but not in high-end journal publications.

In summary: The 15km limit may be plausible, but it's unlikely to ever be attained by real-earth mountains, even the 10km ones that hide from most of erosion in the sea.

An engineer and instructor from NASA posting on Quora had this to say about maximal height of mountains on Earth:

There are three more significant constraints and they all relate to the geology:

1) What is the mountain made of? Put enough rocks on top of other rocks and the ones at the bottom will fail.

2) What is the shear strength of the mountain? No structure is perfect and given enough shear, a fracture will cause the mountain to break and the top to slide off. The wider the mountain the greater the impact of shear, the thinner the lesser impact.

3) What is below the mountain? Make the mountain massive enough and it will subside (sink) into the structure below. On Earth, we have floating tectonic plates. Mountains are limited by this - not coincidentally, it is believed that Mt. Everest sits atop two overlapping plates so it doesn't sink into the liquid.

One of the equations I've seen that attempts to solve this problem is:

So, we can see that gravity is certainly a player, many mountains will be limited by their components.

This answer would seem to confirm Jonas's explanation. However, it does not address some exogeological formations, such as Olympus Mons on Mars, which is approximately three times larger than similar formations found on Earth even though Martian gravity is about 53% that of Earth's. This seems to indicate that the relationship between gravity, geology, and maximal height may be too complex to be accurately summarized in a single rule of thumb or simple equation.

The original post on Quora can be found here, but a Quora account is necessary in order to view it.

The NASA response with a "rule of thumb" on maximum mountain height is probably as good as it gets without a big grant and a lot of work. The Hawaiian Islands and Everest are very different circumstances. Suppose that Hawaii forms between the ancient Indian continent and the Asian continent. Hawaii rises above a hot spot in the thin oceanic basaltic crust. The magmas that builds the islands change composition to lighter weight magmas due to changes in heat and pressure as they rise and decompress. The overall compressive force of the mountain would be dependent on the average density of the mountain within its footprint, plus the weight of the column of water and atmosphere above it. The Hawaiian Islands move north on the Indian plate as it slides over the hotspot and eventually collide with the Asian continent. The sea floor is subducted in the collision, sinking through the mantle, and the Hawaiian Islands are "scraped-off" the subducted plate to become ophiolitic terranes on the Asian continent. Now you've got heavy mafic rocks where lighter rocks are the norm. A bigger collision follows when India hits and overides Asia and pushes these heavy rocks up into a continental Mount Everest due to the collision compression and the rise of buoyant granite batholiths from the partial melt of the subducting plate and mantle wedge. Our continental mountain now sits on thick continental (two-ply) rock that "float" on the mantle. The mantle is not "liquid". It is "plastic" and therefore deformable under compression. Our two mountains (assume the same footprint) differ in the thickness of the oceanic vs. continental crust where they rest, the breaking strength of the brittle crust below each (based on rock type), the compressive strength of the "plastic" mantle below each (based on mantle composition), and the average density (translated to weight) of each mountain, the strength and duration of hotspot exposure or collision compression (translated to rate of "rise") vs. rate of erosion, and a dozen other factors I'm too ignorant to think of.

Not the answer you're looking for? Browse other questions tagged physics geology .

0
Would it have been possible for the ancients to have built a Tower of Babel?

14
How can we know meteorites found on Earth came from Mars?
8
Is Earth Crust Displacement real?
14
Was the cretaceous the last time atmospheric carbon dioxide was significantly higher than it is today?
5
If gas expands then how are stars formed from collapse of gas and dust?
13
Can a combination of wind and ice move a 700 lb (300 kg) rock?
27
Is Feynman's claim about the history of measurements of the charge of the electron after Millikan accurate?