I've heard theories that mermaid sightings were the result of sex-starved sailors mistaking manatees, dugongs or Steller's sea cows for beautiful women. History.com claims Columbus did this, "How I met your mother" has an episode named after the theory, and the taxon Sirenia got its name from the theory.

Has anyone tried to confirm or deny this theory, possibly by seeing if "mermaid" sightings were more common in locations and seasons associated with sea cows being present?

Manatees, Dugongs, and the Stellar Sea Cow (extinct) are all members of the order, Sirenia. The names themselves are pretty suggestive:

sirenian.org has a section dealing with the history of the name:

Why do we call them sirenians?

Manatees and dugongs are named after the Sirens of ancient Greek Mythology. In Homer's Odyssey, Sirens were half-woman, half-bird creatures that tried to lure Odysseus and his ship onto their island with sweet songs of love. Later, some authors confused Sirens with mermaids (mythical creatures described as half-woman, half-fish), which eventually led to naming of the scientific Order Sirenia. Early European explorers imaged manatees and dugongs were mermaids, possibly because of their pectoral breasts, dexterous forelimbs, and fish-like tails. In 1493, when Columbus wrote about the "mermaids" he had seen in the Caribbean, he commented that they were not as lovely as he had expected. Indigenous cultures in Africa, Australia, and the Americas each have their own unique creation story about how manatees and dugongs "came to be". Some legends say that manatees and dugongs came from human ancestors who were transformed into sirenians by a curse or other misfortune of living near the water.

The same site also provides a helpful map outlining the habitats of various sirenians around the world: 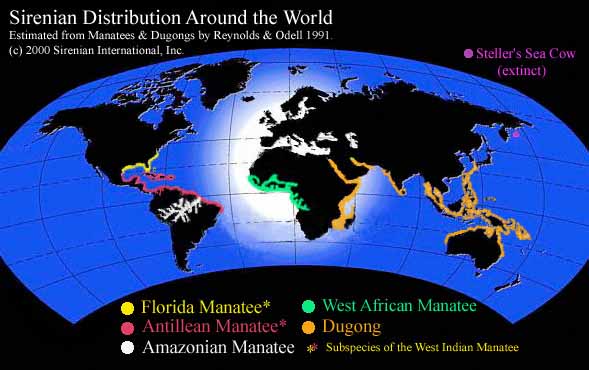 Florida's Sun Sentinel mentions that Columbus made his sighting in 1493 somewhere (now) near the Dominican Republic and that English explorer, John Smith, made his sighting in 1614 in the Caribbean. Both incidents conform geographically to the map above. The same article offers a couple of explanations on why sea cows might have been mistaken for mermaids:

Anthony Piccolo, a professor of literature at Manhattanville College in Purchase, N.Y., said Columbus was mentally primed for mermaids when he saw what history holds to be manatees. Folklore and early travelers' tales featured mermaids aplenty, and the old maps of the known world, including those Columbus consulted, "were always fringed with mermaids and monsters."

Piccolo said manatees would have appeared only more human, and enticing, to New World explorers. The Age of Exploration was also the age of Peter Paul Rubens, the Flemish painter of voluptuous models. The female ideal was much heavier then, and "deprivation of intimacy inflamed all these voyages," Piccolo said.

"Anything in the water became a projection of the sailors' need for contact."

The sailors were deprived in other ways too.

"Some were near their deaths from hunger. It's incredible to me how human beings could endure the extremes on these voyages ... when you see the ship Columbus used, it's like a little pot," Piccolo said, without heat, fresh food or anything resembling comfort.

Some of these sailors apparently conflated their desires for food and for intimacy, seeing both possibilities in the Rubenesque manatee.

... and a second viewpoint:

Even present-day observers have discerned human attributes in sea cows. In the 30 years that James Powell, a biologist with the Wildlife Trust in St. Petersburg, has worked with manatees, "there have been times when they come up out of the water and the light has been such that they did look like the head of a person."

"If you were expecting to see a mermaid," he said, "you'd see this back and tail come up with no dorsal fin" -- as many mermaids are drawn.

Timothy O'Keefe, author of "Manatees: Our Vanishing Mermaids", provides the following reasoning on his website for the association of the sea cow with the mermaid legend:

But consider how a sailor would view the manatee from hundreds of yards away on a moving ship. Then it makes more sense.

When a manatee feeds, it will sometimes bob on the surface, using its flippers to grasp the vegetation and bring it toward its mouth.

When startled in such a position, a manatee will dive head-first, its great tail almost breaking the surface as it sounds. Thus the creature does indeed to seem to have a woman's head and the tail of a fish.

Despite the manatee's unglamorous appearance, there is still something majestic, almost regal, in the way these unusual animals move and act.

In the book, "Mysterious Creatures: A Guide to Cryptozoology", author George M. Eberhart (besides citing a number of historical sightings) offers a list of possible explanations for mermaids including the following:

However, manatees and dugongs often sit vertically in the water to hold their young, which suckle the pectoral mammary glands located at the base of each flipper. Seaweed could conceivable masquerade as hair.

Eberhart also offers other explanations for sightings in the North Atlantic etc.

To conclude, yes, a lot of people have looked into the sea-cow-mermaid theory and offered some compelling explanations. Manatees do migrate. But I'm unaware of any scientific studies trying to corroborate their migratory patterns with historical sightings. However, the famous ones all occurred in regions where manatees are found.

Picture (postcard) of a "fake" mermaid at Aden, Yemen, apparently constructed from a dugong's body: 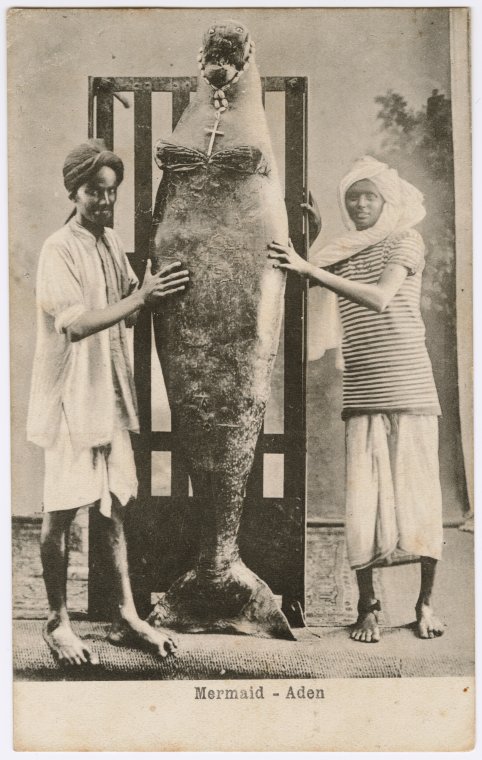 Not the answer you're looking for? Browse other questions tagged history perception hallucinations .

16
Did Gandhi express admiration for Hitler early in WW2?
23
Did Malian sailors reach the Americas in 1311 CE?
6
Did nude pictures kick off the industry for photographs?
20
Did Puritans punish people for celebrating Christmas?
14
Did Babbage write programs for the Analytical Engine prior to Lovelace?
22
Did McKinsey & Co. tell AT&T there was no market for mobile phones?
14
Did Lenin say he made a mistake, their actions caused oppression and massacres and what Russia needed was ten Francis of Assisi?
78
Did Euler make the elementary mistake ŌłÜ-2 ŌłÜ-3 = ŌłÜ6?