Are people who win the lottery more likely to go bankrupt?

It's been suggested that people who win the lottery are more likely to go bankrupt than if they had not. For example, an article on Smartmoney states:

More than 1,900 [lottery] winners went bankrupt within five years. That number implies that 1% of Florida lottery players (winners and losers) go bankrupt in any given year, about double the rate for the broader population during the study period.

The explanation is speculative, being:

The researchers offer a few theories on why so many winners went bust. Prior research has shown that lottery players have below-average incomes and education; it's no great leap to assume they tend to have limited financial literacy (even compared with a general population that has been shown to sorely lack it). Winners might also engage in something behavioral economists call mental accounting by treating their winnings less cautiously than they would their earnings. Of course, winners might simply "develop a taste for luxury goods that outlasts their money," the researchers write.

Are people who win lotteries are more likely to go bankrupt than the average population?

Just this month, Hankins, Hoekstra, and Skiba published a journal article on this subject:

This paper examines whether giving large cash transfers to financially distressed people causes them to avoid bankruptcy. A comparison of Florida Lottery winners who randomly received $50,000 to $150,000 to small winners indicates that such transfers only postpone bankruptcy rather than prevent it, a result inconsistent with the negative shock model of bankruptcy. Furthermore, the large winners who subsequently filed for bankruptcy had similar net assets and unsecured debt as small winners. Thus, our findings suggest that skepticism regarding the long-term impact of cash transfers may be warranted.

There are a number of interesting graphs and tables in the paper, but I don't think I can reproduce them here without violating copyright/fair use. This one does a good job of summarizing the results, though: 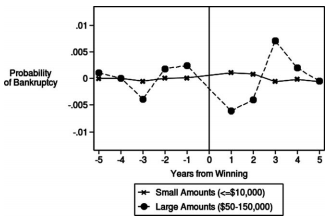 ...the bankruptcy rates of medium and large winners fall 0.87 (p = 0.023) and 1.63 (p = 0.001) percentage points in the first two years, respectively, which represent relative declines of 27% and 50%. These declines are offset, however, by increases of 0.5 (p = 0.287) and 1.21 (p = 0.049) percentage points three to five years after winning. The net result is that within five years after winning, medium and large winners are no more or less likely to file for bankruptcy than are small winners. This is true despite the fact that the median large winner won a cash prize ($65,000) that was sufficient to pay all of the unsecured debt owed by the most financially distressed lottery players ($49,000) at the time of winning.

The authors summarize their results by concluding that lump-sum payments (e.g., lottery winnings) statistically significantly reduce the probability of bankruptcy in the first two years after winning, however, this reduction is followed by a statistically significant increase in the probability of bankruptcy of similar magnitude three to five years after winning.

Note that this study only considered lump-sum winnings up to $150,000; I have not found any studies that track bankruptcies of larger cash payouts. I suspect this is due to the relatively small amount of data available on the large jackpot winners.

I read the abstracts of all of the articles cited by the Hankins/Hoekstra/Skiba paper, and none of them seem to specifically study bankruptcy frequency among lottery winners. One interesting theory arose from a paper by Thaler: He points out that one of the best predictors for one's level of consumption (i.e., spending) is one's income. Therefore, if one's income suddenly spikes due to a lump-sum lottery windfall, one might be very likely to increase one's spending, possibly taking on significant liabilities. The problem is: A lottery payout is only temporary, so once that money runs out one is unable to pay off one's debts.

Not the answer you're looking for? Browse other questions tagged psychology sociology gambling .

3
Real Risk of Bankruptcy after a Lottery Win?

16
Are people more likely to give honest responses to surveys when anonymous?
33
Do nice guys finish last?
42
Do children who kill animals turn out to be violent?
18
Is the “Asshole Effect” a phenomenon correlated with wealth?
40
Are you more likely to be struck by lightning than to win the lottery?
6
Are scammers using social media fake-news sharing behaviour to identify and target gullible people?
13
Are young liberal women more likely to have a mental health condition?