Was one-third of Pakistan flooded in August 2022?

The article later attributes the one third claim to a tweet from Pakistan's Climate Minister Sherry Rehman:

One-third of Pakistan is under water. Frankly, no one has seen this kind of downpour & flooding before,and no one country can cope alone with the multiple, cascading effects of extreme weather, climate events.

Pakistan’s government has said that more than 33 million people, around 15 % of the population, have been affected by the extreme weather.

which makes it clear that the claim is about Pakistan's land area, not population.

The Washington Post seems to disagree; they don't repeat the 1/3 claim and post this map instead, where blue area is clearly less than 1/3 of Pakistan. 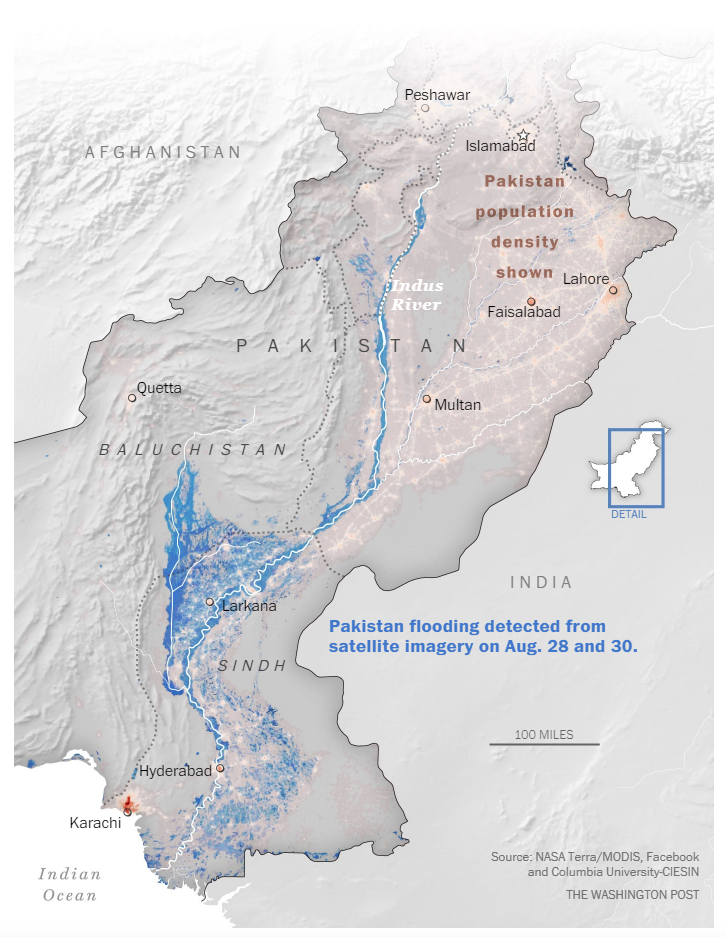 OTOH Nature in its new section repeats the 1/3 claim sans attribution (i.e. as fact) on Sep 2, but offers no analysis to back it up in terms of area. (There's data in there about homes or bridges destroyed etc., but that's not the same thing.)

ESA repeats the claim but with attribution to the Pakistani minister. They don't endorse it themselves, and the blue area in their map is clearly more "zoomed in", note the 10-50 km scale and cities names, i.e. roughly centered around Larkana and the "triangle" flooded area. 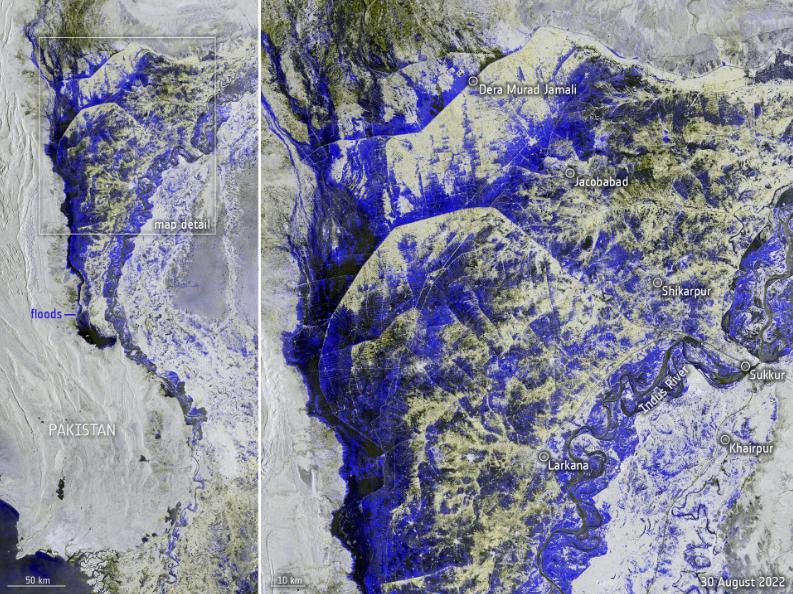 Although it seems a lot of the claim repeats include NASA imagery, NASA themselves don't repeat the 1/3 claim. Also note compared to the other answer that what you see there (on "Live Science") is the zoomed in area boxed below... 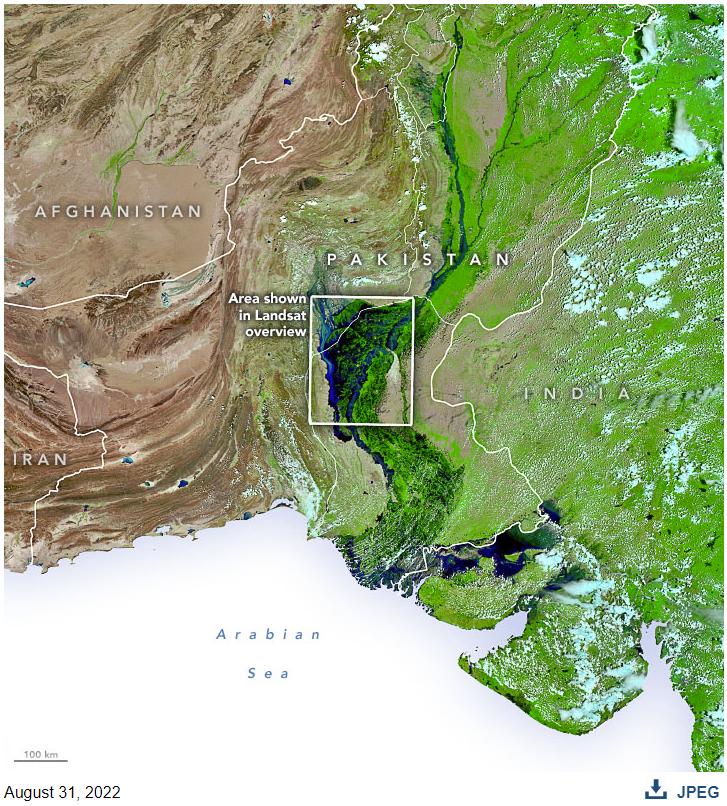 Slightly newer UN data than in the other answer, as of Sep 2 (using UN estimate up to Aug 29)

satellite detected water extents mapped by the United Nations Satellite Center (UNOSAT) indicate preliminarily that of 793,000 km2 of lands in Pakistan analysed between 1 and 29 August, around 75,000 km2 appear to be affected by floodwaters, including some 48,530 km2 that appear to be croplands.

I.e. ignoring any error for the measurements (since the source doesn't provide those), flooded area is <10% of total land area.

Based on the WaPo map, someone suggested in a comment below that the 1/3 ratio might apply to the highly populated areas (i.e. who cares if the deserts aren't flooded) but I've not found a good numerical source for this kind of calculation, and I don't want to determine myself the population-density threshold that would make the claim true, i.e. do some "reverse mathematics" (of sorts) here. OTOH, there are many, many Western sources that give the claim unqualified (esp. in headlines), so it's definitely worth evaluating just that, regardless what the minister might have intended.

FWTW, from the same UN estimate, only 10% of Pakistan's population has been affected up to Aug 29 (although 26% of the pop. in the Sindh province), so the UN is also more conservative than the Pakistani gov't 15% population-level estimate (given in the OP's quote via NBC). A later UN update published on Sep 1 (which adds two more days to the survey, i.e. up to Aug 31) has put the maximum extent flooded area to 86,603 sq km. And the population potentially exposed was bumped to 33% of Sindh province and 15% overall, matching the Pakistani's government estimate in that (latter) regard. (Area wise, 31.7% of Sindh was flooded, from the raw data [44,738 sq km out of 141,102 sq km] provided by the UN on Sep 1.)

There are satellite images from 4th August and 28th August on Live Science website.

How they calculate the "approximately on-third" is not shown, but clearly vast areas of Pakistan have flooded.

This webpage from reliefweb shows a map and analysis of the flooding from over a week ago.

This map illustrates cumulative satellite-detected water using VIIRS in Pakistan between 03 to 23 August 2022. Within the cloud free analyzed areas of about 780,000 km², a total of about 55,000 km² of lands appear to be affected with flood waters.

Wikipedia states the area of Pakistan to be 881,913 km² so the 'cloud free' zone is not far short of that.

Site rules say that 'back-of-the-envelope' calculations are not permitted, but there doesn't seem to be incontrovertible evidence from there, that the flooded area is "one third of Pakistan" at that time.

From a recent episode of BBC Radio program "More or Less" https://www.bbc.co.uk/sounds/play/p0czg85z

They traced the original statement back to the Pakistan Minister saying the proportion of regional districts that were affected by the floods.

110 districts are affected and 80 were hit by a calamity. There are 160 districts (Thanks to comments on other answer for that detail those comments are hidden by default and I did not see them earlier))

4
Has climate change measurably increased the likelihood of tropical storms such as Haiyan?