Were more Indian freedom fighters killed Muslims than any other religion/caste?

I saw this picture which was shared by my Indian friend online for 75th Indian Independence Day: 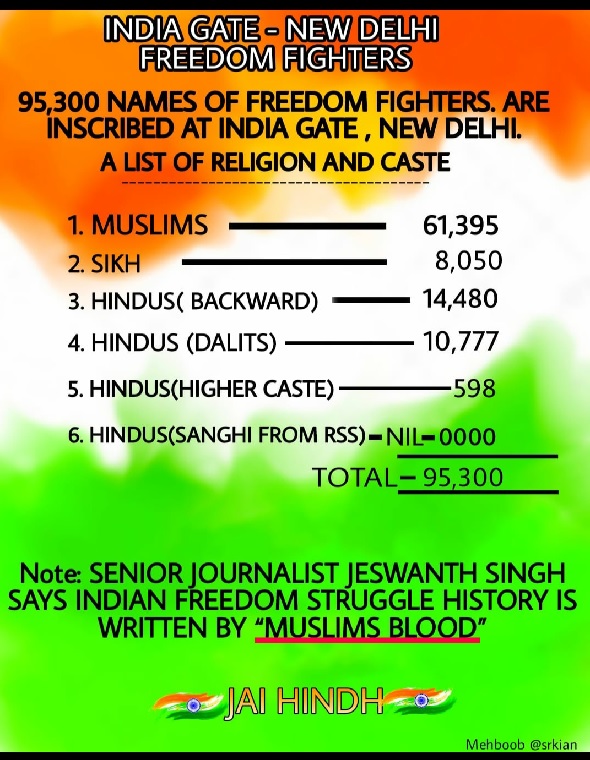 Were more Muslims killed taking part in the Indian independence movement (1857–1947) than any other religion/caste in British India?

This meme has been around in several forms for many years.

At a recent political rally, AIMIM chief and MP from Hyderabad, Asaduddin Owaisi claimed that New Delhi's India Gate has the names of over 95,000 freedom fighters inscribed on it and 65% of those are of Muslims. This has been shared across social media platforms.

They explain that the inscriptions are not of "freedom fighters" (i.e. those who fought for India's independence - see below), but soldiers who fought in World War I.

Newschecker.in reached a similar conclusion in 2022:

According to the investigation conducted by Newschecker, the India Gate does not commemorate India Freedom Fighters but rather has the names of Indian and British soldiers that died in World War I fighting for the British Army.

In India, where the meme was shared, freedom fighter refers to those who fought against the British colonial rule, rather than with the British as Allied Forces in World War I.

In 1972, India legally recognised freedom fighters for a special pension. The Pension Scheme documentation explicitly lists a number of movements and mutinies (see Annexure 1) that qualify. No World War I battles are listed.

33
Have communist governments killed more than 80 million people?
7
Have more people been killed in Chicago than U.S. troops in Afghanistan?
4
Are there more trees in America today than there were during colonial times?
64
Was the German V2 rocket the only weapon whose production killed more than its use?
24
Were more whites slaves brought to North Africa than black slaves were brought to the United States?