Today, we received news that our economy had 0% inflation in the month of July — 0%

This was contested in conservative media, with Fox News running the headline "White House blasted for claiming ‘zero’ inflation after latest CPI report: ‘Lying to everyone’". They claimed it's not inflation that's 0%, but change in inflation that's 0%

That means inflation "slowed in July for the first time in months," as the outlet reported, though it’s only .2% less than the highest CPI (8.7%) in 40 years. Essentially inflation remains almost as bad as it’s been all summer. And it’s not "zero."

Perhaps Biden meant "zero" as in "zero increase" in inflation.

However various other news sites claim that the month-over-month inflation really was 0%.

So which is it?

After a bit more research, I'd rate this true but misleading.

Here is the Consumer Price Index for July 2022 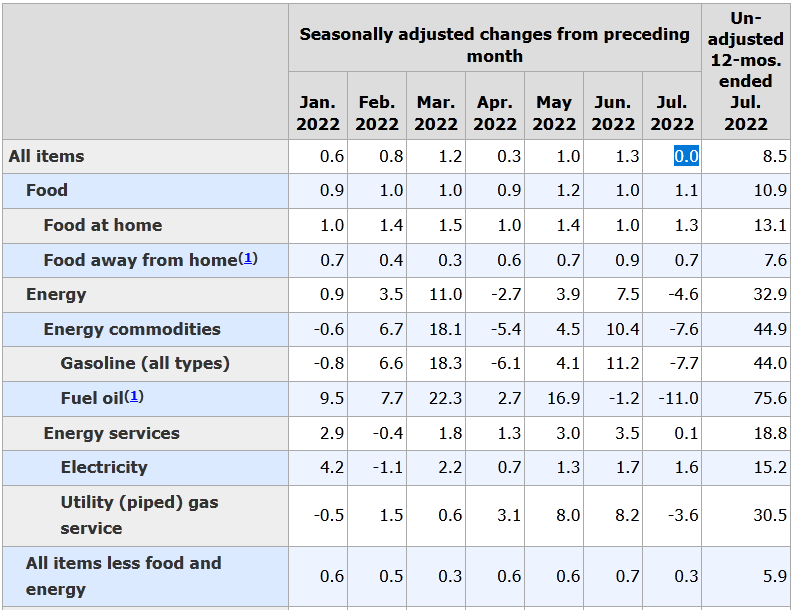 As highlighted in the screenshot, the month-over-month inflation for July 2022 was indeed 0%. This means that the weighted-average of prices measured by the CPI was exactly the same in June 2022 and July 2022.

In other words, while month-over-month inflation was indeed 0% for July, what would normally be called "the inflation as of July" was not.

Presumably Fox is confused because the above chart says "adjusted changes from preceding month". However this refers to the change in the CPI, which is what defines inflation, not to the change in inflation itself.

As an aside, they've now made this claim in two articles, neither of which mentions the month-over-month vs. year-over-year distinction, despite the second being a critique of a NYT article which explains the distinction. That makes it hard to pass this off as an innocent mistake.

Fox either has no understanding of what "inflation" means, or they're deliberately lying.

The CPI did not increase in July 2022: https://www.bls.gov/opub/ted/2022/consumer-price-index-unchanged-over-the-month-up-8-5-percent-over-the-year-in-july-2022.htm

Though, Fox Business reported on the latest Consumer Price Index number, which "rose 8.5% in July from a year ago, below the 9.1% year-over-year surge recorded in June." The rate was less than the CPI number in June [emphasis added]

Their confusion, or just plain lying, about inflation is made even more clear when they say:

Perhaps Biden meant "zero" as in "zero increase" in inflation.

So: Biden's statement was factually correct, albeit arguably cherry-picking. Fox's criticism of it was just plain false.

10
Does the US government voluntarily underreport inflation?
16
Was the September 2012 jobs report manipulated for political purposes?
6
Was inbreeding responsible for haemophilia in royalty?
50
Was Paul Manafort exonerated for the crimes he’s now charged with?
4
Did Iranian state TV say that the drone attack on the tanker in July 2021 was in retaliation for an Israeli strike?
10
Did Russia's parliament, Duma, propose invading Poland in 2022?
12
Does the Inflation Reduction Act increase taxes on people making less than $10,000 / year?