Is there an increase in sales of child-size coffins?

A number of "news sites" have been reporting an increase in child-sized coffins. (The linked is an example, there are many more). The implication being there is an increase of childrens deaths, ascribed to the COVID vaccine? From the Western Standard linked:

A Toronto-based casket manufacturer has taken to Twitter to report historically high child casket sales by the company he works for. The casket salesman, who asked to be referred to by his first name only, told the Western Standard his company has never seen such a significant rise in bulk sales of caskets typically used to bury children. Mick said all producers are seeing this huge uptick in youth-sized coffin sales.

Children's caskets typically accommodate the bodies of children aged between 18 months to around 10 years of age.

"There's no denying it, I would say the sales versus the pre-pandemic period were probably up 30%, maybe 40%. And in this industry, for a 30% or 40% increase in sales, something dramatic has to have happened. And it's not just local to specific towns," Mick said. "It's throughout North America, at least the customers we deal with. We have a few customers over in England, through Ireland, and Scotland as well. And they're also seeing some growth, but not as radical as [it is] in North America. North America seems to be experiencing it at a higher rate than everywhere else that that we deal with specifically."

Mick said he and his family have an idea about what is responsible for the unprecedented increase in coffin sales. "We all think it's something to do with the vaccines. I don't want to say we're a group of people who weren't convinced [by the science], but you know, I think [a family member] got one dose, had a horrible reaction and then nobody else in his family got it. No one in my family has gotten it. It's something serious, causing young people to just immediately die."

Are these claims true? Have there been 1) an increase in coffin sales 2) an increase of child death 3) due to the vaccine?

I cannot find any data on the sales of coffins, but we can look at excess mortality by age group. 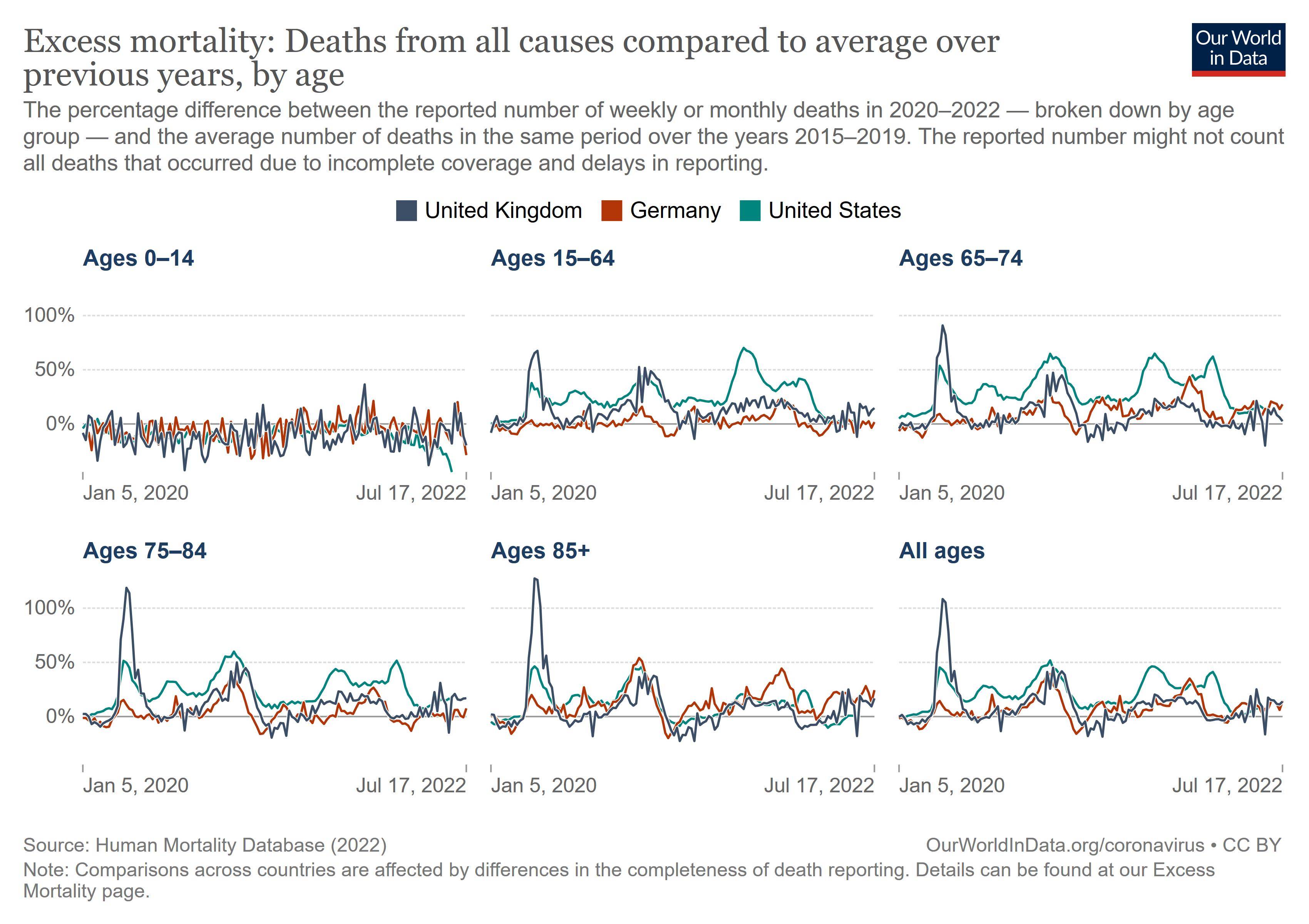 We can decidedly see that there is no rising trend in the excess mortality in the age 0-14 group. In fact, the numbers show that the US (where presumably this claim originates) in this age group the current mortality is 40% below the average from the period 2015-2019. This could be partially due to delayed reporting effects, (Mortality number for recent months may not always be complete.) but there is certainly no evidence for increase mortality under children from any cause.

Whether there is an increased demand for child sized coffins I cannot say (maybe there is a fad for gothic children's room design that I am unaware of), but it is certainly not due to increased child deaths. (Unless this trend change is super recent.)

Update: As far as date data from Canada goes here is the excess mortality rate for Canada based on data from the Human Mortality Database

30
Did any satanic cult ever commit organised ritual murders or sacrifices?
20
Do "new documents" change anything about the Wakefield/MMR vaccine paper/retraction/fraud situation?
11
Are hepatitis B vaccines for newborns safe and cost-effective?
9
Is there a legal video size limit for Super Bowl parties?
29
Are there between 100,000-300,000 child sex slaves in the United States today?
10
Does a child die from malaria every two minutes?
7
Did the Washington Post ever advocate Amazon's position on sales taxes?
11
Did the Neolithic Revolution increase infant mortality rates?
39
Was there recent book burning in Canada?
36
Are there mass graves of indigenous children in Canada?