This widely watched live stream claims to show the Betelgeuse supernova in progress. But I can't find any information elsewhere

No, Betelgeuse is not exploding, and the video does not claim that it is. It carries the legend

That star will explode at some time, as reported by Science ABC

What Is Betelgeuse And Why Will It Explode?

Betelgeuse is a star that is expected to go supernova at some point in the next million years. Its death will be one of the most dramatic celestial events in our universe, and will be visible from Earth. Although the star is massive, and its death will be explosive, it is not close enough to Earth to have any significant impact on our planet.

There has been recent speculation that Betelgeuse is about to explode soon. Nature carried the story

Last year’s dramatic dimming of the star Betelgeuse — familiar to many as the ‘right shoulder’ of the constellation Orion — was caused by a cloud of dust spewed out by the star itself. Astrophysicists reached this conclusion, published on 16 June in Nature, using high-resolution imaging of Betelgeuse before and after the dimming, combined with computer simulations.
. . .
But many astrophysicists warned that the supernova speculation was wishful thinking. They pointed out that the dimming was likely to be caused by more mundane mechanisms, such as a blob of unusually cold matter appearing on the surface of the star in what’s known as a convective cell, or a cloud of dust crossing the line of sight to it.

However, astronomers have witnessed another, more distant, star that is exploding. Mashable reports:

There's a vivid, reddish star in the night sky. Called Betelgeuse, it's found in the famous constellation Orion and over millions of years has swelled in size, earning it the title of a "red supergiant." Betelgeuse, over 500 light-years from Earth, will eventually collapse on itself — or perhaps the distant star already has — resulting in a dramatic explosion called a supernova.

Until recently, astronomers had never directly witnessed a massive, aging star explode. But in 2020, astronomers atop Maui used a powerful telescope to detect an unusually active red supergiant, much more distant than Betelgeuse (at some 120 million light-years away). They watched it closely for 130 days, giving themselves an invaluable view of the grand finale. The resulting stellar explosion is called "supernova 2020tlf."

"We actually saw the star violently erupt," Wynn Jacobson-Galán, an astronomer at the University of California, Berkeley who led the research, told Mashable. "It's been something we wanted to find."

No, it is a looped video.

It is not possible to observe Betelgeuse from the surface of the Earth for more than 24 hours, with a few exceptions in the Antarctic winter. The rotation of the Earth takes Orion and Betelgeuse over the horizon every day, and the day/night cycle would have affected a live feed for a ground-based telescope.

The original question was asked over 24 hours ago and the feed is still going. The YouTube page says "Started streaming on Apr 6, 2022" making it over 4 months of "live" observation.

The time places them somewhere in UTC-04:00 which does not match any time zone in Antarctica.

It's unclear if this is even a looped video of Betelgeuse.

There is a 30 minute countdown in the bottom right corner, and when it hits zero it jumps back up to 30 minutes. And does so over and over for as long as the stream is live.

I've no idea why the stream contains "James Webb Telescope" in the title when it is clearly not from the James Webb Telecope - aside from anything else the schedule for the telescope today is available online JWT schedule 2022/08/08 and at the time of the screenshot below, it is looking at HD-163296

There is a telescope description in the live stream: APM - LZOS Telescope Apo Refractor 254/2250 CNC LW II. This is a a purchasable telescope, not anything to do with JMT: APM Telescopes

Best guess: some amateur astronomer has heard the (mis) reports about Betelgeuse 'imminently' going supernova and has set up their own telescope plus live stream to monitor it, with a looping 'countdown' to keep people interested (for a short time). Or maybe some kind of money-raising scam, although it's hard to see how they'd make money out of this. 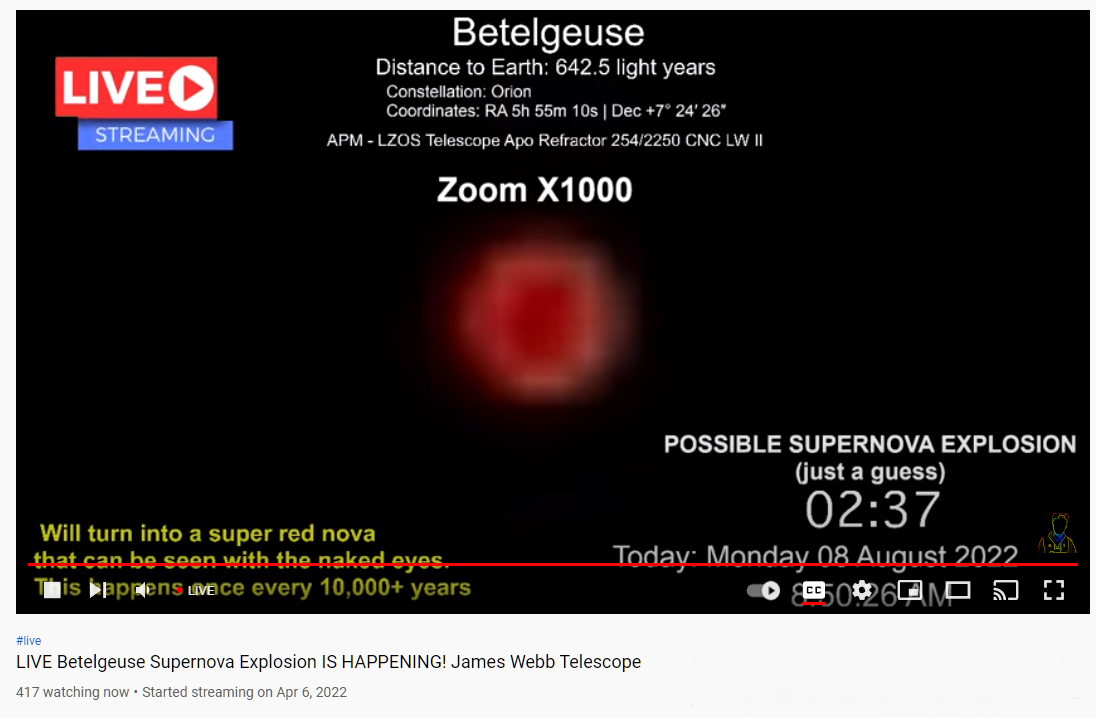 12
More stars than grains of sand?
8
Are there pine trees on Mars?
11
Did the Dogon tribes discover "Trans-Pluto"?
11
Do ancient Hindu texts predict the future expansion of the Sun?
9
Does a lack of radiation shadows disprove the Big Bang Theory?
10
Did Saudi Grand Mufti Abdul Aziz claim the earth is flat?
17
Can one estimate accurately the time until sunset using the width of one's fingers?
16
Does the asteroid 16 Psyche contain this much gold?
10
Did an asteroid impact in 2000 cause widespread power outages in Yukon, Canada?