Does China receive billions of dollars of foreign aid and special WTO status for being a "developing country"?

According to this video, "China Just Lost the Space Race!",

China is a so called "developing country" which has for decades been receiving billions of dollars of foreign aid and special trade status in the World Trade Organization because it's just a poor developing country.

Is it true that China receives "billions of dollars of foreign aid and special trade status in the World Trade Organization".

As I see nothing better has been posted regarding (the fairly ambiguous--to me- claim on) aid, according to the World Bank (which relies on OECD data for this), China has been a net recipient of aid until 2010, but a net contributor thereafter. Cumulatively, the did get more aid than they disbursed since 1980, when that dataset stars. 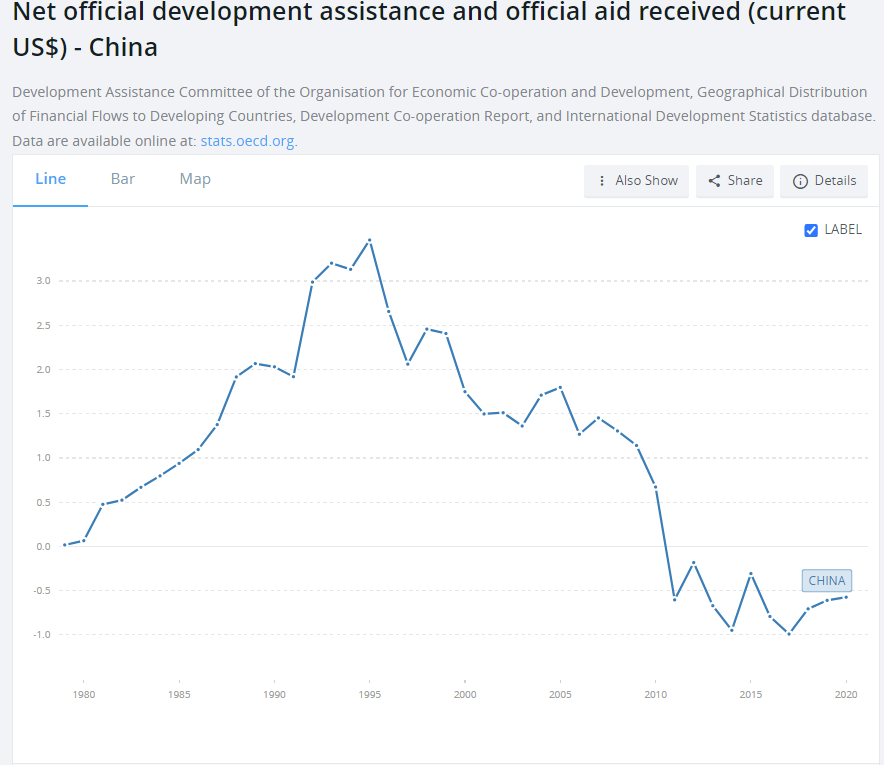 "Make of this what you will" as the saying goes, i.e. decide for yourself if this makes the OP quote statement part regarding aid true or false.

The aid in the graph above has almost nothing to do with the WTO though, which China joined in 2001.

By the way, it's not always straightforward, especially in more recent times, to classify Western aid to China. As Germany has been one of the larger such contributors, one paper discussing that says:

German official development assistance to China, however, is not “traditional aid” in the sense of supporting poverty reduction through public funds but rather consists of promotional loans (Förderkredite) and technical cooperation. [...]

Germany recorded a flow of 432 million euros (net) worth of official development assistance (ODA) to China in 2019, making China the third-largest recipient of German ODA.

I could not find total gross aid data flowing to China yet, but it is somewhat plausible it could still reach a billion dollars per year, given what Germany gives (i.e. around half that). Especially considering e.g. the net figures from the WB are bounded from below by -$1 bn for recent years, but the gross aid sent out by China (to Africa etc.) is given as $5.9 bn for 2019 by a Japanese source (JICA). Honestly there are probably serious issues with cross checking such data between sources due to different methodologies for counting aid. (The Japanese source counts concessional and interest free loans as aid. It says that in doing so it's following the OECD post-2019 methodology. This change was also mentioned in the previous paper on Germany.)

So it's still true that China receives over a billion dollars in aid per year on that (gross) measure, by 2020 at least.

I want to provide a partial answer, with a "kind of, but not directly" to summarize. This is more to provide the resources and evidence I've found so hopefully this can be answered definitively by another user. (or maybe myself at a later date)

It's also important to explore the counterpoint noted by Fizz in the comments on the question, since 2010 China has introduced their own preferential trade agreements (available at same link as above, under "provider of"). This lists 44 LDCs or, least developed countries, for which China waives or drastically reduces import fees from these nations, also providing "billions in aid" "through the WTO". For lack of better phrasing.

Now on to actual aid. That's hard. The WTO technically does not distribute aid themselves:

Most Aid-for-Trade is disbursed bilaterally by donors or through multilateral and regional finance and development organisations, such as the World Bank and the regional development banks.

It's important to note that:

[T]he WTO can not deliver development assistance. It is not a development agency, and has no intention of becoming one. [Their] core mandate is — and must remain — setting trade rules.

Back to "[m]ost Aid-for-Trade is disbursed bilaterally by donors or through multilateral and regional finance and development organisations."; the most recently completed (2021) Aid-for-Trade Stocktaking Event's report show's

The IMF's role in economic recovery is central in advising countries to move swiftly to policies that support workers and businesses. The fund has lent 107 billion USD to low-income and commodity-dependent economies.

Being a commodity-dependent economy implies some portion of those IMF funds were provided to China, and in some ways facilitated by the WTO - it is not aid directly from the WTO.

For more information this year's, ongoing at time of writing, Aid-for-Trade Stocktaking Event.

Not the answer you're looking for? Browse other questions tagged china finance trade .

6
Did China achieve its benchmark of lifting 1.4 billion people out of poverty mainly by lowering the standard?

7
Did China plant 66 billion trees since 2003?
8
US trade deficit and the iPhone
75
Have any financial traders gotten a large shipment of a commodity sent to themselves by mistake?
8
Did the Bundesnachrichtendienst (BND) accuse China of pressuring the WHO to suppress news about the Wuhan outbreak?